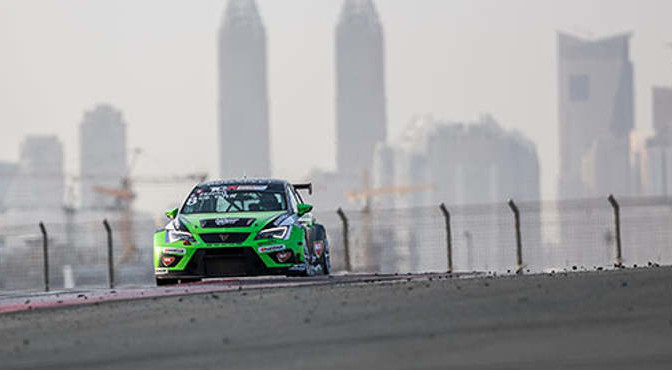 For the second consecutive year, CREVENTIC, well-known from its flagship event that is the Hankook 24H DUBAI (9-11 January 2020), is also the promoter of the TCR Middle East Series. The fourth season of the popular series for production-based touring cars consists of two triple-header events on two consecutive weekends at Dubai Autodrome and Abu Dhabi’s Yas Marina Circuit. The season-opening round in Dubai will be part of the event package of the prestigious Hankook 24H DUBAI, which ensures increased public awareness and media coverage. The Yas Marina Circuit, which has hosted the Formula 1 Abu Dhabi Grand Prix since 2009, will be the suitable venue for the season finale (16-17 January).

Launched in 2014, the TCR class is one of the success stories in international motorsport of the current decade. Front-wheel driven touring cars, based on four- or five-door production saloon cars and powered by two-litre turbocharged engines deliver exciting on-track action, not in the least thanks to a clever balance-of-performance system to ensure equal chances for the various vehicles. Cars from Alfa Romeo, Audi, CUPRA, Honda, Hyundai, KIA, Lada, Lynk & Co, Opel, Peugeot, Renault, SEAT, Subaru and Volkswagen are currently homologated in the TCR class and eligible to race in the various national and international series and championships.

Rounds in Dubai and Abu Dhabi, possibility to add Sepang

Officially licensed by WSC Ltd, the rights-holder of the TCR regulations, CREVENTIC is the promoter of the TCR Middle East Series. The 2020 season gets underway with three races as the official support category of the Hankook 24H DUBAI at Dubai Autodrome on 9 and 10 January 2020. The series will be concluded with another triple-header round at the Yas Marina Circuit in Abu Dhabi the following weekend, 16 and 17 January 2020. At both circuits, the Grand Prix configuration will be used. As a part of a tie-up with TCR Asia, CREVENTIC also enables participants in the TCR Middle East Series to take part in the TCR Asia round at Sepang International Circuit in Malaysia, 15 and 16 February. The event in Malaysia isn’t a point-scoring round for the TCR Middle East Series.

Participation in the TCR Middle East Series is open for drivers holding a national UAE licence or an international licence (grade D or C). Each weekend includes an optional private test with 2-3 hours of track time, a 30-minute free practice session, 30 minutes of qualifying and three races of 30 minutes each with a standing start. The qualifying result determines the grid positions for race 1 while the top ten from qualifying will be starting in reversed order for race 2. The classification of race 1 will be used to determine the grid positions for race 3.

While the races of the TCR Middle East Series are sprint races without driver changes, teams can run up to three drivers per weekend. Points will be awarded for qualifying and for the positions achieved in each of the three sprint races. A special Junior Cup is in place for drivers born in or after 1996.

Based on its vast experience in organising race events all over the world, CREVENTIC is offering attractively priced packages for participation in the 2020 TCR Middle East Series. The rate of 12,750 Euros (excl. VAT) includes transport of cars and equipment from all over the world to Dubai and back, transportation inside the UAE, all fuel, use of pit box or pit structure, a personalised souvenir pit box banner, live timing, race coverage and 20 event passes for each round. Further information can be found at: middleeast.tcr-series.com