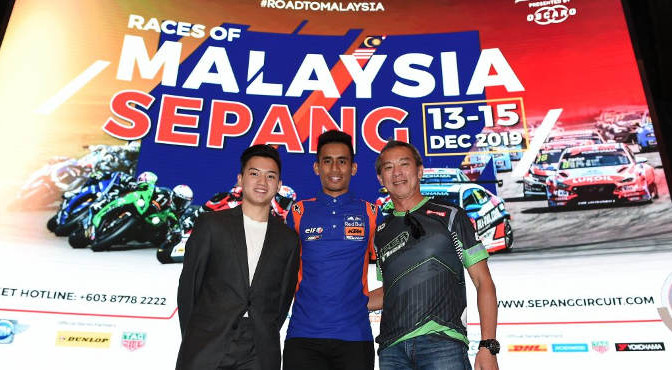 Three local wildcards, including MotoGP rider Hafizh Syahrin, are set to take part in the inaugural WTCR Race of Malaysia at the Sepang International Circuit from 13-15 December.

Along with Syahrin, the participation of Mitchell Cheah and Douglas Khoo was also announced during the official launch of Races of Malaysia – which the WTCR – FIA World Touring Car Cup presented by OSCARO and the FIM Endurance World Championship for motorbikes will combine for a ground-breaking double-header.

Syahrin, who rides for the Red Bull KTM Tech 3 squad in MotoGP, will contest the 8 Hours of Sepang EWC counter on Saturday 14 December, before he switches from two to four wheels for the trio of WTCR races on 15 December. They will take place in daylight, dusk and under the Sepang International Circuit’s newly-installed floodlights.

The media launch in Kuala Lumpur yesterday (Monday) was honoured by the attendance of the Malaysian Minister of Tourism, Arts and Culture, Datuk Mohamadin Ketapi, who joined 150 guests, including 80 local media representatives, at the spectacular event.

During the launch, an agreement was signed with Tourism Malaysia, a key partner of Races of Malaysia along with Sepang International Circuit and Eurosport Events, promoter of the EWC and WTCR / OSCARO.

Sepang International Circuit Chief Executive Officer, Dato’ Razlan Razali, said: “For 20 years, we have strived to bring many world-class events to appease motorsports fans not only from Malaysia but also from the region. With the departure of F1 in Malaysia, we were tasked to look into other world-class events to include in our annual calendar. Through fan voting and further feasibility study, FIM EWC and FIA WTCR were the top two selected events.”

“For the WTCR and EWC events at Sepang, we are grateful and delighted to join forces with Tourism Malaysia as they kick off their Visit Malaysia 2020 campaign. The support we get from Tourism Malaysia goes a long way in ensuring that Malaysia stands out as the main destination for motorsports tourism in the region.”

François Ribeiro, Head of Eurosport Events, the WTCR and EWC promoter, used the launch to provide an overview of the two categories. Afterwards, he expressed his delight that Cheah, Khoo and Syahrin will all be competing at Races of Malaysia, with Syahrin set for action in both events.

“Hafizh Syahrin is a household name in Malaysia and we’re delighted he won’t just be competing at Races of Malaysia, but truly embracing the double-header concept by taking part in both the 8 Hours of Sepang and the three races that make up WTCR Race of Malaysia,” said Ribeiro.

“We have followed Mitchell Cheah’s progress with interest in TCR Asia last year and ADAC TCR Germany this season and he’s demonstrating a great potential. What Douglas Khoo lacks in experience of international competition he’ll make up for with vast track knowledge.”

The participation of Cheah, Khoo and Syahrin in the deciding rounds of the 2019 WTCR – FIA World Touring Car Cup presented by OSCARO is subject to FIA approval.

Khoo is set to race a CUPRA TCR while Cheah and Syahrin will drive Volkswagen Golf GTI TCRs for Liqui Moly Team Engstler.

Further details of Races of Malaysia, which is being promoted via the #RoadToMalaysia hashtag, will be announced in due course.