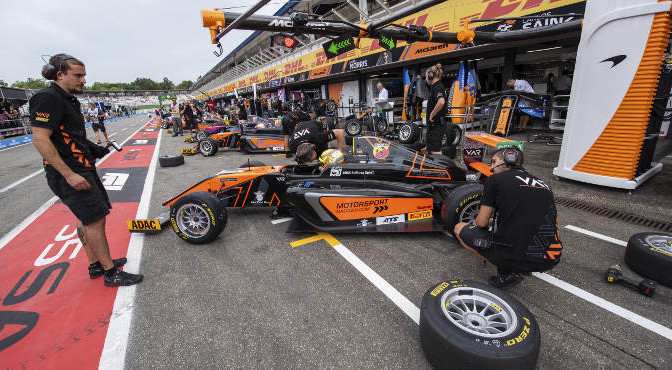 Niklas Krütten got a taste of Formula 1 at Hockenheim last weekend. Together with four of his fellow drivers from the ADAC Formula 4, he was invited to meet Ferrari’s ace, Charles Leclerc, and to look around the Scuderia’s garage. He also signed autographs on the fan zone’s big stage along with the other Formula 4 juniors and enjoyed the very special atmosphere at the Hockenheimring.

Krütten had a spectacular scrap with Van Amersfoort Racing team-mate Dennis Hauger in the first race. After making a great start, Krütten went into the lead on the very first lap and defended P1 until there was an unfortunate contact with his team-mate just eight minutes before the end of the 30-minute session. Krütten retired with a damaged car.

In the weekend’s second round under Formula 1′s banner, 17-year-old Krütten finished seventh and thus secured points towards the championship. Apart from posting a number of kilometres in the lead in Race 1, he also showed that he had the pace to achieve a podium with two third places and a P5 in practice and qualifying. He missed best time by just 0.167 seconds in Q1.

The first race went brilliantly well for you initially. How did the contact with your team-mate come about?
Everything had been going according to plan up until that point in the first race, from practice through to qualifying. I really enjoyed scrapping with my team-mate. It was just a racing incident, and neither of us was to blame in actual fact. Unfortunately, I did not score any points and my car got damaged.

Luckily for you, though, you were able to line up in Sunday’s second race…
Yes, I’ve got to really thank my mechanics for that. They worked on the car until the middle of the night, changing parts, including the engine. I struggled a bit in the race, but not because of the car, which felt great. I still have to analyze properly why I was unable to use its full potential. Still, I’m glad that I scored points.

How do you expect to do at Zandvoort?
I’ve never driven there before and only know the circuit from the simulator. Consequently, I’ll have to do some testing first before the race weekend. Looking at the track layout, it certainly seems exciting to drive. Racing becomes more interesting for us drivers, I think, when the gravel traps and walls are really close, and your body gets an extra shot of adrenaline. At any rate, I’m very much looking forward to it and feel mega inspired.