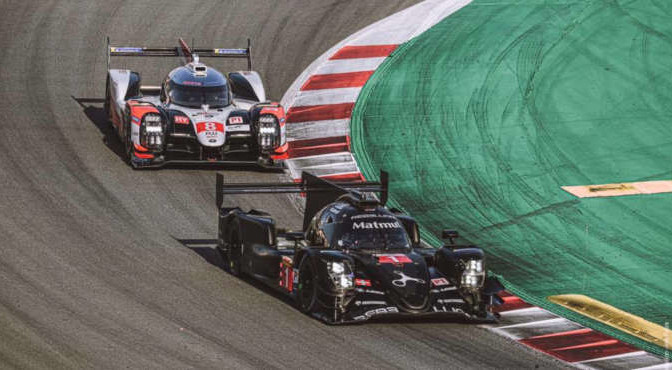 Five drivers took part in this first meeting of the FIA WEC 2019-2020 season. Rebel drivers Bruno Senna, Gustavo Menezes and Nathanaël Berthon were joined by the Brazilian Felipe Nasr and French Norman Nato. Four four-hour driving sessions took place during the two days of Prologue. Under a blazing sun, the drivers were at the wheel of both REBELLION R-13 cars.

At the end of the last session, the car N. 1 achieved the best non-hybrid chrono of the Prologue (1:29.408) at only 0.221 second of the Toyota Hybrid N. 8 car. Promising performances at one month of the first race of the season at Silverstone.

See you soon to learn more about the 2019-2020 FIA WEC season of REBELLION Racing.
“The technical work of the WEC / FIA / ACO with the modifications of the regulation for the non-hybrid cars will surely allow us to be more competitive during this season. In addition, this Prologue 2019 allowed us to test new drivers on REBELLION R-13 cars. Our teams kept on working on the cars and ended up getting closer to 0.221 seconds of the Toyota Hybrids lap times. We hope that with the new EoT, it will allow us to fight in LMP1 category from Silverstone next month.”

Alexandre Pesci, president and owner of REBELLION Corporation
“It was a good test for us, the reliability was pretty good. The whole season experience helped us for some points that we had to develop. Felipe (Nasr) and Norman (Nato) did a good job at the wheel of the car, it was interesting to see new perspectives with the R-13 cars. I think that we will have a clear role to play this season.”

Bruno Senna
“The Test was very productive. We had Felipe (Nasr) et Norman (Nato) joining us, it was really cool. We’ve raced with each other in the past and it was fun working with them. Now the full focus is going on to Silverstone with the situation we have. It was really sad to see the SMP Racing leaving the championship because obviously they were great competitors. Nonetheless, the WEC and the whole Team is working very hard to make a pleasurable racing in LMP1. During the Prologue, we worked a lot, I did a lot of laps. We had a small time to prepare after Le Mans and I get the best car possible ready for Silverstone. Thank you to the whole Team to make it possible. We are looking for to geting back on the racetrack and of course being on top of the podium more than ever. I think it’s a critical season with the Hypercars coming next year. To finish with this final season of LMP1 racing, we will do our best until Le Mans and throughout the championship.”

Gustavo Menezes
“It was very nice to find the Team and the car after Le Mans. The Team had things to test on the car and new drivers too. For my part, I did not drive much during these sessions but I was able to test my fitness by driving at the hottest time! It was 49 or 50 degrees on the track, it was extreme conditions that we do not often have the opportunity to meet!”

Nathanaël Berthon
“First of all, I would like to thank REBELLION Racing and Oreca for the opportunity to test with them at Barcelona WEC Prologue. I really enjoyed these 2 days of testing and I had a lot of driving the R-13 LMP1 for the first time! Main purposes of the test was to get a good understanding on the car functionality, validate the 2019 Michelin tires and continue their development program together with all engineers and drivers ahead of the upcoming season. I think we were able to get some really valuable directions from the test.”

Felipe Nasr
“I discovered the LMP1 category at the wheel of the REBELLION R-13 car. There is more downforce than the cars I’m used to driving. I had a lot of things to learn in a short time but my adaptation went well. I was able to progress at every lap even if it was very hot, we drove in extreme conditions. The team is pretty cool, I was quickly introduced to everyone. I thank REBELLION and Oreca for the opportunity to drive during the FIA WEC Prologue.”