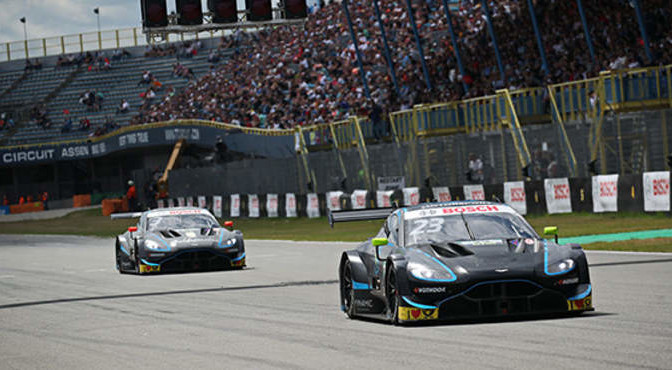 R-Motorsport opened the second half of their first DTM season at the TT Circuit Assen on Sunday with a double points-scoring result.

The track was in excellent condition on Sunday afternoon after Saturday’s rain-affected race, so the tenth race of eighteen this season started in the dry.

Daniel Juncadella (28, Spain) was unlucky in the first race on Saturday and had a technical problem. The Spaniard had a strong showing this Sunday and was inside the points positions for quite a long time during his first stint. He worked his way up the field after his pit stop on Lap 22 and even fought for fifth place at times. He finished seventh in the end.

Paul Di Resta (33, Great Britain), who had set the third-fastest lap of the race in tough conditions on Saturday, continued his strong performance this weekend in Race 2. Di Resta made his mandatory stop after 21 laps and then gradually improved in the final stages to finish in the points. The DTM champion from 2010 crossed the finish line directly behind Daniel Juncadella in eighth place.

Ferdinand von Habsburg (22, Austria) made his mandatory pit stop on Lap 20 and finished the race in twelfth position. Unfortunately for Jake Dennis (24, Great Britain), the tenth race of the season ended shortly after the start of the second stint when he had to retire in the pits with a technical problem.

For the sixth race weekend of the team’s first season in the DTM, R-Motorsport will head to Brands Hatch on the weekend of 10th/11th August to contest Aston Martin’s home race.

Daniel Juncadella
Qualifying: P14
Race: P7
Start number: 23
Car: Aston Martin Vantage DTM
“I made a strong start and improved to tenth place on the first lap, which was fantastic. After that, I was a little surprised that I was able to match the BMWs for pace. Towards the end of the stint, I even got the feeling that their tyres had degraded more than mine. However, I had to scrap a lot with them and my tyres took a bit of a battering as a result. Still, we wanted to put in a long first stint and then have a shorter second one, which was worth it in the end. The second stint was really good fun and I was able to overtake many cars. I have mixed feelings about the last lap, because I had hoped to finish in fifth place. Unfortunately, though, that was not meant to be, because my DRS was not working. The race was still terrific, so many thanks to the team for all their hard work. They repaired the car in double quick time after the retirement yesterday and absolutely deserved to take this result.”

Paul Di Resta
Qualifying: P15
Race: P8
Start number: 03
Car: Aston Martin Vantage DTM
“That was a good race, but it could have been even better. Unfortunately, I got blocked, otherwise I might even have finished fifth. Still, we’ll happily settle for the points at the end of the day.”

Ferdinand von Habsburg
Qualifying: P16
Race: P12
Start number: 62
Car: Aston Martin Vantage DTM
“It was a good race overall. I was able to learn a lot as a Rookie once more, but it’s a pity in a way, because I think the car and I had enough performance to do even better. Unfortunately, things do not always work out perfectly. I lost about seven seconds in the pits and ultimately finished out of the points by this time. Still, I’m very pleased that I was able to stay out a little longer on the first stint and managed with just one stop as a result. I had a strong second stint – I’m extremely proud of that, but obviously, it’s a bit frustrating to have missed the points.”

Jake Dennis
Qualifying: P17
Race: DNF
Start number: 76
Car: Aston Martin Vantage DTM
“That was a disappointing end to a tough weekend. I already had problems with my car in the second qualifying session on Sunday morning when I was much slower down the straights than my teammates. Unfortunately, I had a brake failure during the race. I’m hoping now that my home race will go better next time out at Brands Hatch.”

Dr Florian Kamelger, Team Principal
“That was an excellent team performance with the right tyre strategy which Daniel and Paul used to perfection to finish seventh and eighth respectively and secure points. They both paced themselves really well over the race so that they even had good prospects of a place in the Top Five right up until the last lap. The way we managed the tyres on the abrasive surface of the TT Circuit Assen gave our squad a good chance of getting ahead and they did that in a calculating, efficient manner. Unfortunately, a problem changing Ferdinand’s right rear wheel prevented another top-ten result. A problem with the brakes that we are still investigating ended Jake’s race prematurely. At any rate, Assen has shown that with good strategy, we can actually achieve decent results in dry conditions.”