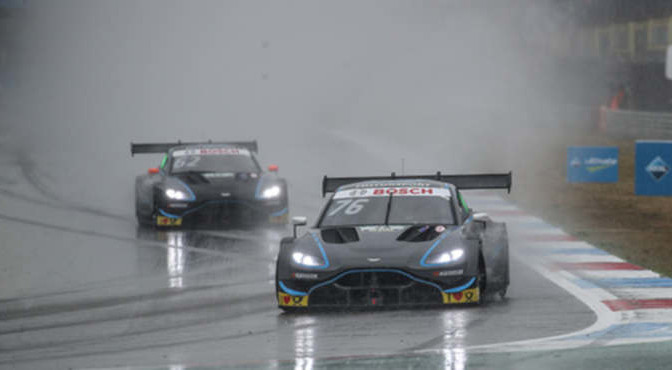 R-Motorsport reach the halfway stage of the 2019 DTM season in a challenging, rain-affected race at Assen

Shortly before the start of Saturday’s race, the heavens opened above the TT Circuit Assen. Heavy rain inundated the track, guaranteeing that the drivers would have a lot of spray to contend with. After the free practice and qualifying sessions had all been held in dry conditions, the decision was taken for safety reasons to start the race behind the safety car.

After starting Saturday’s race from the second half of the starting grid, the R-Motorsport driver quartet opted for a collective pit stop on lap seven. Jake Dennis (24, Great Britain) made up six places compared to his starting position, crossing the line in twelfth.

His team-mate Ferdinand von Habsburg (22, Austria) also improved by four positions over the course of the race to finish in 13th place.

Unfortunately for Daniel Juncadella (28, Spain), the ninth race of the season ended shortly after the start. A technical problem brought the Spaniard to a standstill at the edge of the track after only a few minutes.

The team will be back in action tomorrow, contesting the second race of the weekend at TT Circuit Assen. Qualifying commences at 10:20 CEST (live stream on ran.de). The lights on the gantry for the start of the tenth race of the campaign will go out at the usual time of 13:30 CEST (live on SAT1).

Jake Dennis
Qualifying: P17
Race: P12
Start number: 76
Car: Aston Martin Vantage DTM
“It was a difficult race, but I think it would have been even harder for us in the dry. Looked at from that perspective, we can be relatively satisfied with the race. I didn’t have a perfect pit stop, which probably cost us some time. With twelfth, we finished not far outside the points. All things considered, I’m not dissatisfied with the way the day went.”

Ferdinand von Habsburg
Qualifying: P17
Race: P13
Start number: 62
Car: Aston Martin Vantage DTM
“At the start of the race the visibility was absolutely zero due to the spray. There was standing water on the straights, but we had to go through it all the same. We had in any case been pinning our hopes on weather conditions like these, because the bigger the risk, the better our chances. We then all pitted together right after the safety car phase, which put everyone on the same strategy. Consequently, we were unable to benefit from the undercut this time. Towards the end, I was involved in a tense battle with Jake, which was actually a lot of fun. We both learned from each other in the process and even managed to close the gap on the Audi and BMW ahead of us. We can be very proud of that.”

Paul Di Resta
Qualifying: P16
Race: P14
Start number: 03
Car: Aston Martin Vantage DTM
“That was a very difficult race for me today. My result is a long way from showing what would have been possible for me. I had a car which was capable of very good lap times, as was apparent from several fastest laps during the race. Unfortunately, I lost 37 seconds during my pit stop because another car was blocking my pit stand. That explains why I was kept waiting so long. All in all, it was a race of lost opportunities, which is rather frustrating.”

Daniel Juncadella
Qualifying: P15
Race: DNF
Start number: 23
Car: Aston Martin Vantage DTM
“It’s a pity I had to park my car so early due to a technical problem. We now need to look closely at what went wrong here. Unfortunately, that was a short race for me. With the weather being so changeable today, we had been hoping to do better.”

Dr Florian Kamelger, Team Principal
“Today, we experienced racing under extremely difficult conditions. In heavy rain, our squad put in a very strong driving performance, which unfortunately went unrewarded in terms of top results, but opportunities for making progress through the field are limited when you’re starting from so far back on the grid. With P12, P13 and P14, Jake, Ferdinand and Paul got the maximum that was possible in these conditions. With his fast lap times, Paul could have achieved even more, but he lost valuable time at his pit stop. We need to get to the bottom of what caused Daniel’s retirement. Anyway, we now have to look ahead to Sunday and aim to get ourselves back in the points.”