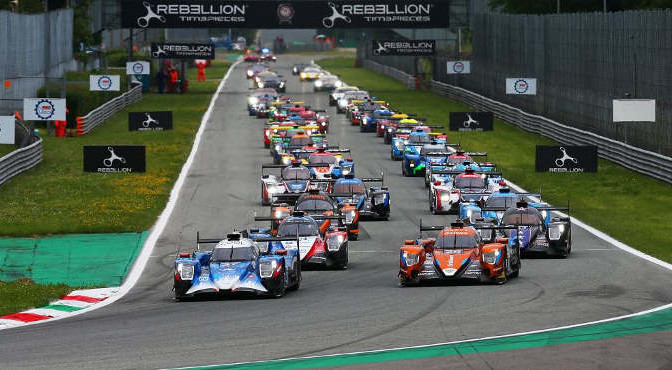 On Saturday 20 July the ELMS will return to the Circuit de Barcelona-Catalunya for the first time in ten years for a 4-hour race that will be run after sunset, another first for the series.
Forty-one cars across three classes will provide a weekend of action-packed racing for the fans to enjoy, with a truly international grid of twenty-nine teams and one hundred and thirteen drivers representing twenty-five different nations from across the globe.

Local interest will be focused on former F1 test driver Dani Clos, the Spaniard racing on his home track for the first time since switching to endurance racing with Polish team Inter Europol Competition in the LMP2 class Ligier-Gibson alongside Adrian Tambay and Jakob Smiechowski.

LMP2: the return after the 24 Hours of Le Mans

There are eighteen cars in the LMP2 class and leading the way are the reigning LMP2 champions, G-Drive Racing, after their victory in Monza. 2018 drivers champion Roman Rusinov is joined by 2018 LMP3 champion Job Van Uitert. Jean Eric Vergne returns to the team after missing the opening two races of the season.

IDEC Sport are just two points behind the Russian team after Memo Rojas, Paul-Loup Chatin and Paul Lafargue scored two podium finishes in the first two races. The round 1 winning DragonSpeed Oreca-Gibson is in third just 12 points behind the G-Drive Aurus.

The grid also includes teams and drivers who competed at the 24 Hours of Le Mans last month, including Nicolas Lapierre who won the LMP2 category with former ELMS champions Signatech Alpine Matmut. Lapierre is now a four time Le Mans winner and returns to the ELMS in the no37 Cool Racing Oreca.

LMP3: 15 cars on track for the victory

The LMP3 class will feature 15 entries with Eurointernational heading the category after reigning Michelin le Mans Cup Champion Jens Petersen and Mikkel Jensen scored the teams ELMS debut win in Monza. Martin Hippe and Nigel Moore has taking two podium finishes so far to give Polish outfit Inter Europol Competition a good start to the 2019 season in second place in the championship standings. The all French Ultimate team are 18 points behind the leaders, the round 1 winning trio of Matthieu Lahaye, Jean-Baptiste Lahaye and François Heriau looking to get their championship back on track in Spain after failing to score any points in Monza last time out.

The no77 Dempsey-Proton Racing Porsche is proving to be the car to beat in the high quality 8 car LMGTE field with two pole positions for Matteo Cairoli and victory in Monza for the Italian and teammates Christian Ried and Riccardo Pera. They are just two points ahead of the no51 Luzich Racing Ferrari F488 GTE EVO of former FIA World GT Champion Alessandro Pier Guidi and fellow drivers Fabien Lavergne and Nicklas Nielsen.

Jörg Bergmeister and Egidio Perfetti were the LMGTE Am race winners at Le Mans last month and in doing so they became the 2018/19 FIA World Endurance LMGTE AM Champions, with Team Project 1 taking the team world title. Perfetti and Bergmeister return to the ELMS in the no56 Project 1 Porsche alongside David Heinemeier Hansson.

The LMGTE grid will also feature the FIA Women in Motorsport backed crew of Manuela Gostner, Rahel Frey and Michelle Gatting in the no83 Kessel Racing Ferrari. The all female crew got their season off to a great start with a hard fought second place in le Castellet.