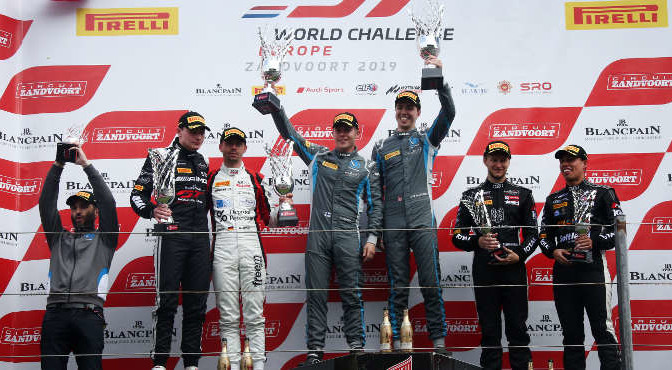 Aaro Vainio and Hugo de Sadeleer registered their best performance so far in the Blancpain GT World Challenge Europe at Zandvoort in the Netherlands this weekend. In Saturday’s race around the dunes on the North Sea coast, the two Juniors finished sixth overall, which was enough to give them a maiden victory in the Silver Cup. Buoyed by their success, the duo went on to repeat the result on Sunday and put themselves in a promising position in the title chase.

Third place at Brands Hatch, second place at Misano, and a deserved victory at Zandvoort: “We are really happy that we’ve been steadily improving each time,” said Hugo de Sadeleer. “The team have once again done a great job and presented us with a great car this weekend. This success is a well-earned reward for the whole team.”

De Sadeleer and Aaro Vainio staged remarkable charges through the field on both days. “In race two, we managed to gain no fewer than five positions from 13th on the grid,” said the Finn. “After Hugo got through the first half without making any mistakes, I brought the car home safely in eighth. At all times, I had our position in the Silver Cup in my mind, which is why I wasn’t taking any chances.”

The two victories also brought a maximum points haul in the Silver Cup class. The additional 33 points move them up to second place in the standings, and the two up-and-coming drivers have also significantly reduced the gap on the championship leaders.

Also scoring vital points were Marvin Kirchhöfer and Ricky Collard. Both R-Motorsport drivers put in impressive performances in the Saturday race, showing strong pace and great fighting spirit. Collard thrilled the fans with a skilful overtaking manoeuvre on championship leader Luca Stolz in the opening phase of the first race. In Sunday’s race, however, a drive-through penalty thwarted their hopes of further championship points.

Dr Florian Kamelger, Team Principal: “It’s great to see our team improve with each round of the Silver Cup in the Blancpain GT World Challenge Europe. I’m really proud of Hugo and Aaro for having secured a first win in class for R-Motorsport in this series. The fact that they were able to repeat the result just one day later underscores the enormous potential of our squad. This gratifying outcome serves as a tremendous motivation for the team as our focus now moves to the upcoming 24-hour race at Spa.”