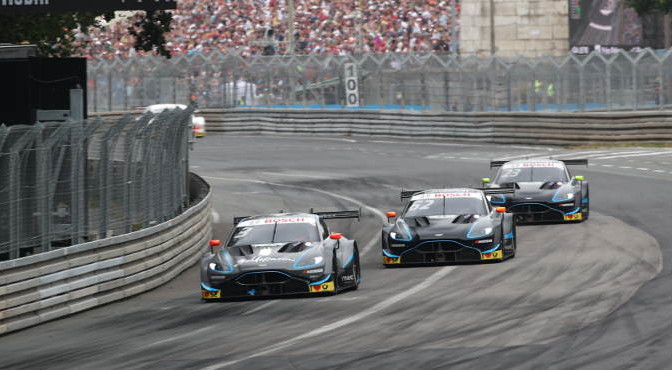 Second Top Ten result of the weekend: Daniel Juncadella in another points finish after his P6 on Saturday
R-Motorsport put in further valuable racing mileage with the new Aston Martin Vantage DTM on the Norisring in Nuremberg
Daniel Juncadella: “We can be satisfied with the point, especially as there were no incidents or safety car deployments today”
Dr Florian Kamelger: “After we got our best result of the season yesterday, today was obviously quite sobering. But these results show our current level of performance and that we still have a lot of work ahead of us to close the gap on our opponents”
Foto
Second Top Ten finish of the weekend for Daniel Juncadella, Copy: R-Motorsport
Just two months after the new Aston Martin Vantage DTM made its race debut, R-Motorsport once again finish both races of the standout weekend at the Norisring in the points.

The fourth race weekend of R-Motorsport’s debut DTM season took the team to the Norisring in Nuremberg. After achieving the best race result of our as of yet young DTM history in Race 1 on Saturday, with three drivers in the Top Ten, the driver quartet started the second race on Sunday from the second half of the grid.

Daniel Juncadella (28, Spain) drove the longest first stint of all drivers, hoping to benefit from a possible rain shower at the end of the race. The rain did not materialise, but the late stop on Lap 42 was instrumental in Daniel securing P10 at the flag. After a sixth-place finish on Saturday, this was his second Top Ten result of the weekend.

Daniel’s team-mate Ferdinand von Habsburg (22, Austria), who completed his mandatory pit stop after 18 laps, just missed out on a second points finish of the weekend in eleventh place.

Unlike his team-mates, Jake Dennis (24, Great Britain) opted for an early stop. He pitted as early as the end of the opening lap to change his tyres and finished the eighth race of the season in twelfth place.

Paul Di Resta (33, Great Britain) came in for his mandatory stop on the 14th lap, but had to park the car in the garage 17 minutes before the end of the race after his rear wheel rim sustained damage in a collision with another car.

The next race weekend for the team is at the TT Circuit Assen on the weekend of 19th – 21st July. This fifth of nine events on the DTM calendar will mark the start of the second half of the season.

Daniel Juncadella
Qualifying: P13
Race: P10
Start number: 23
Car: Aston Martin Vantage DTM
“The early stage of the race was pretty difficult. I had a relatively bad start, which is a shame because we usually get off the line quite well. But unfortunately, I was unable to find enough grip. Then I got stuck between all the cars and found myself at the end of the field. That’s why I focused on driving my own race and implementing our strategy. It paid off with a championship point at the end. We can be satisfied with that, especially as there were no incidents or safety car deployments today to shake up the field. In that sense, it’s good that we were able to score a point.”

Ferdinand von Habsburg
Qualifying: P15
Race: P11
Start number: 62
Car: Aston Martin Vantage DTM
“Today’s race went well from my perspective. Eleventh place is OK considering we started from 15th on the grid and didn’t have the benefit of a safety car. I had good pace and gained some positions during the race. At times, I was matching the front-runners for speed and maintaining the gap to them. That’s a cause for optimism, although I’m obviously disappointed to have missed out on the points so narrowly.”

Jake Dennis
Qualifying: P17
Race: P12
Start number: 76
Car: Aston Martin Vantage DTM
“We tried an early stop after the first lap today. This time, though, there was no safety car for us to benefit from. That was unlucky. Unfortunately, it just wasn’t my weekend. The strategy simply did not work out. However, it’s a positive that we succeeded in improving the car with our changes for the second race. That should also help us on the upcoming race weekends.”

Paul Di Resta
Qualifying: P14
Race: DNF
Start number: 03
Car: Aston Martin Vantage DTM
“That was once again not a good day for me. Unfortunately, my right rear rim was damaged in a contact with an opponent. The car was then quite hard to drive, but eventually it got to the point where it was simply undriveable and I was unable to continue. We then decided to park the car in the garage so as not to risk any further damage.”

Dr Florian Kamelger, Team Principal
“After we got our best result of the season yesterday, today was obviously quite sobering. But these results show our current level of performance and that we still have a lot of work ahead of us to close the gap on our opponents. Daniel again got the maximum out of our technology package today. His efforts were at least rewarded with a points finish in the Top Ten. Ferdinand drove another consistently good race again, crossing the line as the second-best Aston Martin Vantage DTM driver in eleventh place ahead of Jake in twelfth. Paul had to drop out after a contact with an opponent damaged his rear right rim.”