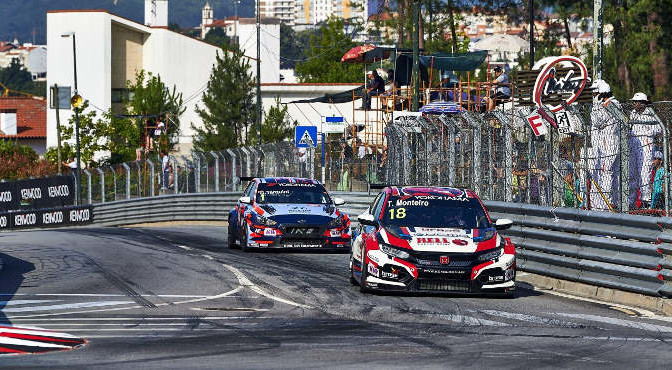 Saving his new tyres for Sunday’s qualifying session, which decides the grid for two races, the Argentinian qualified 14th, his progress compromised by the 50kg compensation weight carried by the Civic plus the 10kg added in a Balance of Performance adjustment this week.

A strong start gained him a position, and he was also able to take advantage of contact between KCMG’s Tiago Monteiro and another car to climb to 11th place by the chequered flag.

Team-mate Esteban Guerrieri maintained his lead of the Drivers’ Championship, despite a challenging day.

A sensor issue and yellow flags at the end of qualifying restricted him to 19th place – which became 16th due to penalties applied to other drivers – and the Argentinian did the near-impossible by climbing to 12th place a few laps from the finish.

But a sudden power loss caused him to slow for the remainder and dropped him to 24th; a result that means he still leads the standings by 15 points.

Home hero Tiago Monteiro was buoyed as KCMG’s recent resurgence continued and produced his strongest performance since the Marrakech street circuit in April.

Sadly for the Portuguese, who climbed from 15th to 10th early on, he was run off the road by a rival who braked too late for the first chicane after taking the joker lap, and fell to the back of the field while waiting for his assailant to move out of the way. He finished an unrepresentative 23rd.

Team-mate Attila Tassi’s engine-change since the Nurburgring guaranteed a back-of-the-grid start under series rules, but in showing top-15 pace in practice and qualifying, he validated several set-up options explored by his team during the day.

Staying out of trouble, despite the tightly-packed field, the Hungarian finished 21st.

Nestor Girolami 29
“From qualifying 14th to finishing 11th, it’s not a terrible result on a track like this where overtaking is so tough. I took the joker lap at the right time to avoid losing a place, but perhaps I could have gained one more if I’d gone a lap later. We saved our new tyres in qualifying, so we should be in good shape tomorrow with them. That was a very tight race. I made up one place at the start and another when there was an incident ahead of me. The pace looks okay for tomorrow, so if we can maximise qualifying, we should be in decent shape.”

Esteban Guerrieri 86
“Sometimes in motorsport, everything goes right for you – and we’ve had a few days like that this year. Sometimes, however, you have days like this. You just have to learn from them and move on. I lost two runs in qualifying because of a sensor issue and then had yellow flags that left me in the midfield. I started 16th, but 11th or 12th was going to be my finishing position until I started losing power and dropped back. Hopefully we can find the issue and it won’t affect us tomorrow, because I feel both Bebu and I can still get some very good results here.”

Attila Tassi 9
“That was an incredibly intense race; mainly with how heavily you have to work the brakes, and the heat inside the car. We knew coming into the weekend that the engine-change penalty would put me at the back of the grid for this race, so it made sense to try some things on my car in practice, qualifying and the race and I think we’ve discovered some things that can be quite useful for tomorrow’s races. The joker lap was an interesting addition and I think tomorrow can be a good day.”

Tiago Monteiro 18
“The result isn’t what I was looking for, but this is racing. I’m happy to be back and fighting against the others on home soil. To put a lap together here with no mistakes is tough, so I was pretty happy with 15th in qualifying and step-by-step, we’re closing the gap. The race pace was even better and we were looking at maybe a top-10 finish. Gabriele [Tarquini] exited the joker lap, overshot the corner and I had nowhere to go, so I lost 15 places. The speed is good and I honestly feel we can still make another big step overnight. I’m confident for tomorrow.”

Dominik Greiner
Team Manager
“Today’s results are a long way from what we were hoping for and we’ve seen the gap in the championship come down a lot. After we had a technical issue with Esteban’s car in qualifying, we looked like finishing 11th and 12th, which would have been a good damage-limitation exercise, but then Esteban started losing power and lost a lot of positions towards the end of the race. We’ll investigate the cause, put it right and come out fighting tomorrow as we aim to score as many points as we possibly can with both drivers.”

Dario d’Esposito
Team Principal
“Despite the results, this weekend has been good so far speed-wise. Attila showed good pace in practice and qualifying for a guy who’s never been here, and we managed to try some useful things on his car today that we can use tomorrow. This was the plan as soon as we knew we’d have to change his engine and start him from the back. Tiago’s been faster than anywhere else since Marrakech and without the contact with Gabriele, I think he could have been in the top 10. We have a lot to be optimistic about for tomorrow.”