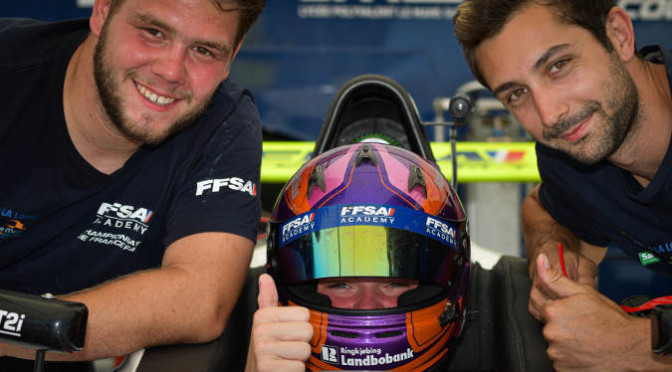 A challenging circuit and scorching weather put the young drivers of the FFSA Academy to the test in the south of France. With two races on the programme, Saturday was an important day and many drivers made a positive impact.

In the early morning, Hadrien David was keen to take the lead over his rival Reshad De Gerus, who had preceded him in the last race of the previous meeting at Spa Francorchamps. “Having achieved pole position for Race 1, the goal was clearly not to miss my start and to be safe from a possible attack from Reshad,” commented Hadrien. “Subsequently, my pace was very good until the end, I was able to widen the gap and take the point for the fastest lap. In the end, it was a very good race. “

Hays joins David and De Gerus on the podium

“I tried to pass Hadrien in the first corners, but it was impossible to try a maneouvre without taking a big risk,” admitted Reshad De Gerus. “Since we had created a big gap to the rest of the pack, I preferred to secure my 2nd position in the closing laps and save my tyres as much as possible as the Lédenon circuit is quite hard on the tyres.”

The duel for the third step of the podium was decided on the first lap. The American Nicky Hays was able to pass Enzo Valente immediately, before surprising Victor Bernier. Very competitive in the Gard, Bernier sought to recover his place from Hays for a few laps, but he also had to watch out for Valente in his mirrors. The classification remained there and Bernier took the opportunity to win in Junior. Behind, Gillian Henrion and Isack Hadjar have retained their respective 6th and 7th places on the starting grid.

10th in Race 1, Mikkel Grundtvig was honoured to start in pole position for Race 2 in the afternoon following the reverse grid principle, as he had at Spa Francorchamps! Except this time, the result was very different, as the Dane recognises. “I had a bad memory of Belgium where I dropped from 1st to 10th place in Race 2. Fortunately, I handled the start and the following laps a lot better. I even set the fastest time! I was looking forward to getting on the podium this season, I am very happy to have done so. The standard in France is very high, much higher than the Danish F4 Championship where I raced in 2018.”

Behind the seventh winner of this exciting season, the positions remained as for the starting grid for the Belgian Van der Henst and the South African Stuart White, who completed a very international podium. In 4th, Isack Hadjar finished as top French driver and best Junior of this second round. Starting 9th, Reshad De Gerus had a superb attacking run to return to 5th place. The Reunion driver took 6 points in the Championship against Hadrien David, after losing 10 points after the qualifications. The two strong men of the French F4 Championship are striking blows in quick succession.

In a final pass of De Gerus on Valente, Gillian Henrion and the American Nicky Hays took the opportunity to gain a place. Having had to use a tyre from the Spa race because of a defect on one of his four race tyres, Hadrien David did not feel so comfortable on tarmac measured at nearly 60° and had to be satisfied with 9th place ahead of Victor Bernier.