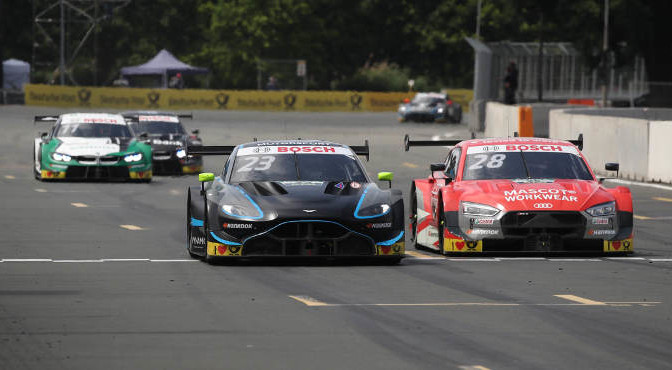 Exciting racing on the streets of Nuremberg as three drivers from R-Motorsport’s squad of four finish in the points at the season highlight on the demanding street circuit.

Daniel Juncadella (28, Spain) did very well just one year ago at Nuremberg’s Norisring when he secured his maiden pole position and first podium finish in the DTM. In this year’s first race, Daniel came into the pits early on Lap 3 to change tyres and benefited from the safety car coming out almost immediately afterwards. As the race progressed, the Spanish driver was involved in an exciting battle for third place on the podium right up until the chequered flag. He ultimately crossed the finish line in sixth place and equalled the best individual result so far in the team’s young DTM history.

Jake Dennis (24, Great Britain) and Ferdinand von Habsburg (22, Austria), who finished in ninth and tenth place respectively, completed a strong team performance for R-Motorsport. For the first time ever, three Aston Martin Vantage DTM scored points in what was only the team’s fourth DTM race weekend. Like their team-mate Daniel, Jake and Ferdinand also came in early to complete their mandatory stops (Jake on Lap 3, Ferdinand immediately after the first lap). Paul Di Resta (33, Great Britain) made his stop after eleven laps. He came home in twelfth place just outside the Top Ten.

The team travelled to the Norisring with the extra experience of a two day test at Vallelunga. During the period in between the races at Misano and Nuremberg, the team worked on the performance and reliability of the new Aston Martin Vantage DTM at the Italian test track. The car was developed and built in record time over the winter. The team will get their next chance to secure points and gain further vital experience with the Aston Martin Vantage DTM on Sunday. The weekend’s second race at the Norisring starts at 1.30 pm.

Daniel Juncadella
Qualifying: P13
Race: P6
Start number: 23
Car: Aston Martin Vantage DTM
“What a race! That was probably one of my toughest races ever, but it really paid off in the end. We don’t have a car that can finish in the points every time, but that’s exactly what I achieved today with sixth place. It’s terrific. The team’s race strategy was brilliant and we also had that necessary bit of luck. Many thanks to the whole team for their hard work over the past few weeks and months.”

Jake Dennis
Qualifying: P18
Race: P9
Start number: 76
Car: Aston Martin Vantage DTM
“That was a really good team effort with three cars in the Top Ten – a very positive result after qualifying. I had a few issues with overheating on my car and had to do plenty of ‘lift and coast’ to try to cool the engine down. As a result, it was a tough race for me but we managed to survive and get some points in the end, which is very positive.”

Ferdinand von Habsburg
Qualifying: P17
Race: P10
Start number: 62
Car: Aston Martin Vantage DTM
“It’s great to be back in the points. The DTM is always a special event, especially when you have to catch up on the technical side. I got a lot out of the race today and things keep getting better and better for us. Of course, I’m not 100% satisfied because two of my team-mates finished ahead of me. Still, three drivers in the Top Ten is a good team result for our outfit, one that we never expected, so we should be pleased.”

Paul Di Resta
Qualifying: P16
Race: P12
Start number: 03
Car: Aston Martin Vantage DTM
“Bad day at the office for me today. I got hit in Turn 1 and sustained damage and then the same thing happened to me again in Turn 4. From that point on, I was very much on my own in the race, as the car was quite badly damaged. It was impossible to predict how the safety car deployment was going to go. Unfortunately, we took the wrong decision. Here’s to a fresh start in tomorrow’s second race.”

Dr Florian Kamelger, Team Principal
“Three Aston Martin Vantage DTM with points-scoring finishes in sixth, ninth and tenth place gives us our best result of the season to date. Dani’s hard-hitting performance today saw him move up briefly into fourth place. He was able to execute a superb manoeuvre and overtake local favourite, Marco Wittmann. Unfortunately, towards the end of the race, he then lost two places to opponents on fresher tyres. We were able to round off a good, solid team effort with finishes in the Top Ten by Jake and Ferdinand. Unfortunately for Paul, no more than 12th place was possible in a race that ebbed and flowed. I would like to say a big ‘thank you’ to the whole crew here at the race track for doing such a great job.”