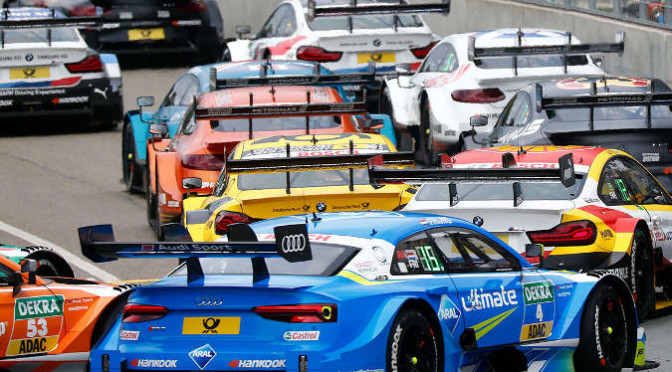 The DTM is gearing up for races seven and eight of ist 2019 season at the Norisring, the historic, high-speed street circuit in downtown Nuremberg, and the touring car series’ blue-riband event.

For the first time, the DTM will race at the Norisring using its new-formula 600+hp turbo-charged cars, virtually guaranteeing dramatic new lap-records and top-speeds of 280km/h around the short 2.3km circuit.

This weekend’s event will mark the 77th running of the Norisring Speedweekend – a spectacle that attracts a huge number of fans, first-class support races and a host of international and domestic celebrity guests.

For DTM’s two German manufacturers, Audi and BMW, the Nuremberg weekend is their most local – and important – event. No track on the DTM calendar is nearer to the two marque’s corporate headquarters, in Ingolstadt (Audi) and Munich (BMW).

Local hero Wittmann: “The most stressful event of the year”

“For me, this is the most stressful race of the year,” says the local boy from nearby Fürth. “But that’s not really a problem. In fact, I like it: it’s nice to know I have the full support of the local fans, and my family and friends. It’s awesome and gives me a real boost.”

Double-winners Wittmann and Rast are the only drivers to have scored more than one race win each in the 2019 season. And Rast arrives at the Norisring with a unique new livery celebrating Audi’s involvement in the Audi Cup, the high-profile football tournament that takes place at the end of July. His Audi RS4 DTM will sport a huge FC Bayern Munich emblem on its roof to celebrate the event.

Making an emotional return this weekend will be Rast’s team-mate, Briton Jamie Green, who sat out the Misano round to undergo an appendectomy. The Briton has won the event no fewer than four times, and will be keen to mark his comeback with a strong result.

Newcomers Aston Martin have used the time between the Misano and Norisring rounds to undertake some intensive test work with its Vantage DTM. “We’ve made some progress,” admits rookie driver Ferdinand von Habsburg. “And I hope we’ve moved a step closer to the competition because I want to fight more with the other drivers during the races.”

In addition to regular supports from the popular Porsche Carrera Cup Germany and the rapidly growing W Series, the Norisring timetable is bolstered by a host of classic race machinery.

Following its popular slot at Zolder, the touring car Classics racing touring cars of the 1980s and ’90s will do battle against each other around the city streets.

Meanwhile, the BMW M1 Procar Revival makes a jaw-dropping one-off appearance – 39 years after last racing at the Norisring. No fewer than 14 models of the stunning wedge-shaped sports cars will perform high-speed demo laps throughout the weekend.

Advance ticket bookings for all 2019 race weekends can be made quickly and easily via the official website DTM.com/tickets.

DTM fans around the world can watch races live on TV or streamed live via DTM.com.

» Quotes – Norisring
“I know the track from racing Formula 3, which helps a little. A DTM car is not so far away from a Formula 3 car – but has much more power and is faster. The Norisring is a special event for the DTM. On this racetrack, speed on the straights is key to success. For me personally, I hope I get all the braking points right.”
Ferdinand von Habsburg (R-Motorsport/Aston Martin)
“The Norisring will be an absolute highlight of the season, and I’m sure that Audi will be able to win again there as well. The Norisring is a racetrack that changes dramatically during the course of the weekend. Since it is not a permanent course, the surface is still very dirty at the beginning and only gains grip over time. Therefore, we have to learn to read the track from lap to lap and from session to session in order to develop a feel for the grip-level and to work our wayup to the limit. For me, the nice thing about the Norisring is that you reach the limit from below, rather than from exceeding the limit and working back – that way ends up in the wall very quickly! It’s always a special challenge at the Norisring.”
Nico Müller (Audi Team Abt Sportsline)
“Of course it would be a dream to win my home race again. That said, 2018 will be difficult to beat because it was so emotional for me. BMW has a good car, as we’ve shown in the opening rounds; and, if the weather is good, I hope that we can build upon our good results. This year’s cars are significantly faster than last year’s thanks to the new turbo engines, so it will be new territory for everyone as we tune the cars to this particular course. There will be no lack of spectacle and excitement.”
Marco Wittmann (BMW Team RMG)