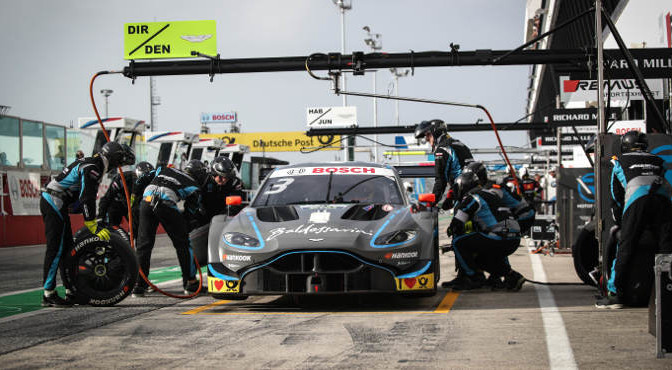 The new generation of DTM cars are expected to reach top speeds of more than 265 km/h and to average 185 km/h on the tight street circuit
During the break between DTM weekends at Misano and the Norisring, R-Motorsport spent two days of testing at Vallelunga, working to improve performance and reliability
Paul Di Resta, Ferdinand von Habsburg and Daniel Juncadella will take possession of their new Aston Martin Vantages at the start of the race weekend
Florian Kamelger: “The DTM races in Nuremberg always generate a tremendous atmosphere because of the huge backdrop of spectators, so it would be especially gratifying to put on a good performance for the fans and to get back among the points”
Foto
Aston Martin Vantage to make Norisring DTM debut, Copy: R-Motorsport
A fabulous setting, high temperatures and a demanding street circuit that instantly punishes the slightest error: R-Motorsport are facing a real challenge at the Norisring this coming weekend.

The tradition-steeped circuit in Nuremberg is generally considered to be one of the major highlights of the DTM season. But it’s not just the unique atmosphere that makes it such a standout fixture on the calendar. The special nature of this street circuit presents the drivers and teams with a particularly tricky set of problems to solve.

The layout may look simple with its long straights, two hairpins and low overall number of corners, but the 47 seconds it takes to post a lap time are truly hectic. On the straights, the 2019 generation of DTM cars are expected to reach speeds of more than 265 km/h. The average speed between the Nuremberg barriers and walls is 185 km/h.

While the fastest corner is taken at 102 km/h, the drivers have to slow down to just 52 km/h for the Grundig hairpin. In negotiating the Grundig, the drivers are exposed to a G-force of around 2.5 over a braking distance of 175 meters.

From a strategic point of view, too, the Norisring presents a special challenge: a two-stop strategy is feasible though by no means optimal. There is still a question mark hanging over tyre degradation, which is difficult to predict due to the new turbo units. Normally, however, this is relatively low at the Norisring. The drivers lose around 40 seconds at the pit stop.

For three of the four R-Motorsport drivers, the race weekend gets off to a particularly pleasurable start: between the two free practice sessions (13:00 and 16:15, live stream on ran.de) on Friday, Paul Di Resta, Ferdinand von Habsburg and Daniel Juncadella will take possession of their new Aston Martin Vantages in front of the team hospitality suite (15:15 – 15:30 CEST). Jake Dennis has had the keys to his new car supplied by the British luxury sports car brand for several weeks now.

Jake Dennis:
“The Norisring is famous for its huge support from the fans. The number of people who turn up for the event is just incredible. The track itself is absolutely unique on the race calendar, with its long straights and very few corners. With the Norisring being a street circuit, I think that says it all. There is no room for error: one mistake and you’re in the wall. That’s what makes this place so great. With the track being so short, a qualifying lap is on the limit, as one tenth can gain you three rows. My best experience there was probably making pole position in Formula 3 in 2015. We clearly didn’t have the best car that weekend, but with the perfect lap, I scraped pole by something like one thousandth of a second. I’ll aim to deliver a lap like that again this year. Then I’ll be happy, haha!”

Paul Di Resta:
“I really love the fact that the Norisring has such a short lap. The circuit layout may look rather simple with the two hairpins and the esses, but it’s still technically demanding. It is almost impossible to put in the perfect lap because of the many bumps which make braking difficult, especially on the approach to the hairpins. You cannot leave any margin on laps in qualifying, as thousands of a second make a big difference in terms of grid positions. I’ve made many podium appearances in this DTM race, but I’ve never stood on the top rung. My only win on the streets of Nuremberg to date was in Formula 3 back in 2006.”

Ferdinand von Habsburg:
“The Norisring is a surprisingly physical track and extremely intensive. Utmost perfection is called for, and each of the corners has its own character. You have to be respectful of that if you’re aiming to go fast here. You have to have a good understanding of the circuit, because there is no way you can simply ignore the problems it poses. This street circuit requires a totally different approach to other more conventional tracks, and you have to make the necessary adjustments within such a short time to be quick. My most difficult race was the second of the two Formula 3 races in 2017: I had broken my right wrist in an accident the day before, but I still made it through to the finish and was even in contention for a podium.”

Daniel Juncadella:
“What I especially like about the Norisring is the close wheel-to-wheel racing on such a short track and the incredible atmosphere over the whole race weekend. It is always the most crowded weekend of the year, and the full grandstands are amazing. The most difficult feature of the Norisring for us drivers is identifying the right braking points. At the end of the long straights, it is extremely tricky trying to brake as late as possible, as there are bumps you should not hit. If you do it right, that’s where you gain lap times. Maximising the brake performance is always the key here. My best experience at the Norisring so far was claiming my first ever DTM pole position last year. I will always remember that as a career highlight. It was great to get it on the Norisring in front of such a big crowd.”

Dr Florian Kamelger, Team Principal
“In preparation for the fourth DTM weekend, we went to Vallelunga for two days of testing with Jake Dennis and Paul Di Resta. The team worked on improving the performance and reliability of our Aston Martin Vantage DTM and took another step towards making us more competitive ahead of the Norisring. The Nuremberg street circuit is a very special race venue with a highly unusual layout. The track may look straightforward, but it’s actually very tricky. Nowhere are the brakes subjected to greater stress than going into the two hairpin turns. Before the Grundig, the slowest of the corners, the DTM cars are brutally braked down from a top speed of over 270 km/h with DRS to around 50 km/h, and they have to do that 68 times over the race distance. With a deceleration force of 2.5 G during braking, both driver and vehicle come under extreme stress here. The DTM races in Nuremberg always generate a tremendous atmosphere because of the huge backdrop of spectators, so it would be especially gratifying to put on a good performance for the fans and to get back among the points.”

Foto
Standout race of the season through the streets of Nuremberg, Copy: R-Motorsport