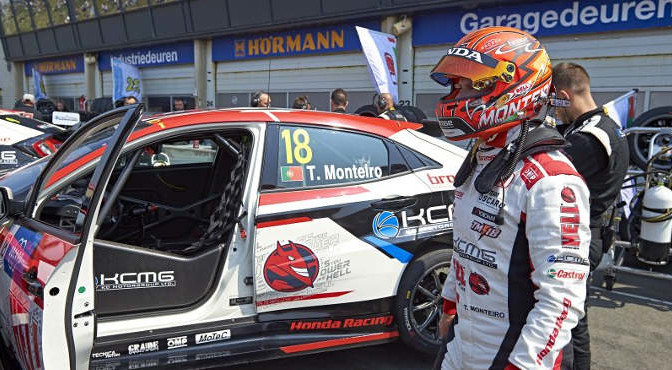 The second half of the WTCR – FIA World Touring Car Championship begins this weekend on the fearsomely-fast Vila Real street circuit in Portugal with the Honda Civic Type R TCR the car to beat after a superb start to proceedings.

Aiming to make the most of the Civic Type R TCR in front of his home crowd is Tiago Monteiro, who lives just one hour away in Porto and created one of the most memorable moments in World Touring Car racing with his victory in 2016.

The national hero missed last year’s event through injury, but is guaranteed a hero’s welcome this weekend in what is his full-time return campaign.

His best result of fourth place also came on a street circuit in Morocco, giving him cause for optimism, despite beginning the weekend in the knowledge that all Hondas will carry 50kg success ballast – just 10kg short of the maximum allowed – as a penalty for their speed.

Team-mate Attila Tassi has never raced on the Vila Real street circuit, but arrives in Portugal on a high.

The 20-year-old Hungarian produced a sensational display last time out at the Nurburgring as he finished a career-best fourth in Race Two and qualified an impressive eighth.

Unfortunately, following his retirement from Race Three in Germany, his engine has had to be changed, meaning he will have to start the Vila Real opener from the back of the grid.

Fellow Civic Type R TCR team ALL-INKL.COM Münnich Motorsport arrive in Portugal on top of the Teams’ Championship and with Esteban Guerrieri and Nestor Girolami first and fourth in the race for the Drivers’ title.

With two wins, two pole positions and six podium finishes in 2019, Esteban has been the most consistent driver in the field.

The Argentinian finished second in Vila Real last year and a repeat result would go a long way towards helping him end the European leg of the WTCR season still in front in the points race.

The Vila Real street track was one of two circuits on which team-mate Nestor competed in 2015 as part of a pair of wildcard appearances in the World Touring Car Championship in a privateer Honda.

As a full-time competitor, he again raced there in 2017, experiencing the Joker Lap and repeating his eighth-place finish of two years earlier.

With three victories to his name this year, he is aiming to make up ground from his current fourth place in the points, but this will be tough with 50kg compensation weight levied against all four Civic Type R TCRs.

Uniquely in the WTCR, Vila Real features a rallycross-style Joker Lap at the final corner, which all drivers must use at least once per race, and which is designed to enhance overtaking opportunities on the street track.

The weekend kicks off with opening practice on Friday evening. A further session plus qualifying and a race follows on Saturday before second qualifying and two more races on Sunday.

Tiago Monteiro 18
“I always enjoy racing at Vila Real because the Portuguese fans are some of the most passionate in the world and I really feed off their energy. My victory here in 2016 is the most amazing moment of my touring car career, with thousands of people gathered around the podium and singing the national anthem. It would be incredible to repeat that this weekend, but honestly, we just have to see where we are come qualifying. As a team we took a pretty major step forwards at the Nurburgring, and if we can continue that trend, we’ll be looking ok. With 50kg compensation weight, however, that might be tough.”

Attila Tassi 9
“The weekend we had at the Nurburgring was exactly what we needed. We made great progress compared to the previous races and showed that if we can just qualify inside the top 10, we can run there quite easily too. Vila Real will be tough because I’ve never driven here and because the engine change means a back-of-the-grid penalty for the first race. Overtaking on street circuits is never easy, but here looks particularly difficult because there are many high-speed corners, and because we’ll carry 50kg compensation weight. We’ll just do our best to finish as high up as we possibly can before we go into the summer break.”

Esteban Guerrieri 86
“I don’t know if I expected to be leading the championship at this point in the season, but it was certainly the target. Somebody called me the half-time champion after the races in Germany, but you don’t win anything for being in front at half-time, and it feels like every point is worth that little bit more now. Vila Real will be extremely difficult because of the 50kg compensation weight we must carry, but I’ve won on each of my last two visits to a street circuit – Macau and Marrakech – and I was second here last year, which proves how good the Honda is on this type of track and how well this team performs at them. The target is to score some solid points and go into the summer break ahead in both championships.”

Nestor Girolami 29
“I’m looking forward to Vila Real. I’ve raced on this circuit twice before, so I start on a level playing field with the drivers who have raced here regularly in World Touring Cars. The most important thing is to qualify inside the top 10 for all three races, which unlocks the possibility to score a good number of points. The great thing about WTCR is that although we know who our main rivals are for the championship, anybody can be quick in any weekend; but that means if you don’t do a good job, you could get nothing.”