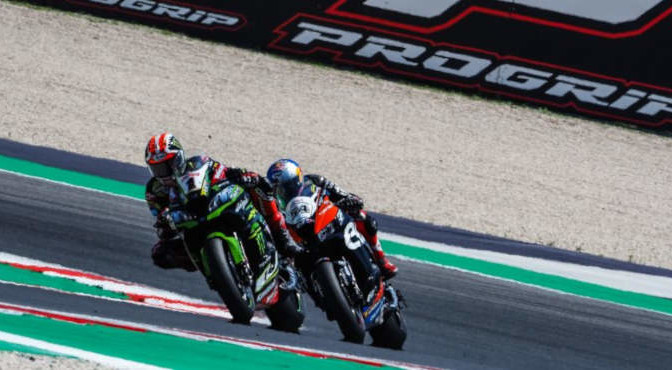 With a 39-point advantage over Jonathan Rea (Kawasaki Racing Team WorldSBK), Alvaro Bautista (ARUBA.IT Racing – Ducati) had a comfortable margin ahead of Race 2 in WorldSBK, combined with a pole position start. The 34-year-old Spaniard looked set for another win but, for a second round, Bautista crashed out of the lead at the start of Lap 2 at Turn 4. This made for an incredible battle at the front as the championship catapulted into life in Italy.

With the race underway, Bautista took the holeshot into Turn 1 as the pack filtered through as neat as possible. Toprak Razgatlioglu (Turkish Puccetti Racing) blasted through the order and was into third by Turn 1, challenging Leon Haslam (Kawasaki Racing Team WorldSBK) into Turn 4. At Turn 14, Jonathan Rea sliced under the Turkish rider for third place.

Then, drama at Turn 4 on Lap 2 as Alvaro Bautista made another error, crashing out of the lead as the front end gave way. The Spaniard crashed out, leaving Leon Haslam in the lead ahead of teammate Rea, whilst Razgatlioglu was third ahead of Marco Melandri (GRT Yamaha WorldSBK) and Alex Lowes (Pata Yamaha WorldSBK Team). Bautista re-joined but was at the back of the field.

With 18 laps to go, it was Razgatlioglu who put a move on Rea at Turn 4, before leading at Turn 1 a lap later, ahead of Leon Haslam. At Turn 14 on the same lap, Rea lunged ahead of Haslam, as the five-time WorldSBK race winner began to fade away. The number 91 then suffered a collision with Marco Melandri as the Italian tried an audacious pass into Turn 2. Both stayed upright but it allowed Razgatlioglu and Rea to break away.

It was another race to forget for Sandro Cortese (GRT Yamaha WorldSBK), from a weekend that looked to show so much promise after Saturday. The German crashed once more but re-joined the race.

With 12 laps left to go, the race was far from decided, with two separate battles: Razgatlioglu defended at the front from Jonathan Rea, whilst Leon Haslam held on to third ahead of Marco Melandri, as Alex Lowes began to claw time back on the battling duo ahead of him. Meanwhile, Michael Ruben Rinaldi (BARNI Racing Team) was lapping half-a-second a lap quicker than those ahead of him.

Three laps to go and it was another disaster for the GRT Yamaha squad, as Marco Melandri crashed at Turn 8, as grip deteriorated with rising track temperatures. Melandri’s crash promoted Bautista into the points. A lap later, and the battle for the race win had calmed, as Rea made a mistake at Turn 10, momentarily letting Razgatlioglu off the hook.

The final four laps was when Jonathan Rea made his move out front, taking the lead at Turn 1. It was a heart-in-mouth moment for Razgatlioglu at Turn 4 however, as he came within millimetres of hitting the rear of Rea, with his rear wheel in the air. The fight was far from done, as the 22-year-old Turkish rider stayed glued to the rear end of Rea.

The final lap beckoned, and it was going to be a head-to-head between the young pretender and the four-time WorldSBK Champion. Razgatlioglu tried at Turn 4 but thought better of it, waiting until Turn 8 to make his move. Toprak ran wide, with Rea slicing back ahead and the gloves were really off. As the lap came to a close, Rea defended superbly and despite Razgatlioglu bouncing up the rear wheel of Rea at the final corner, he couldn’t get the better of the reigning-quadruple WorldSBK Champion. Rea took the win ahead of the Turkish star, to take a 75th WorldSBK win and become the highest point-scorer of all time. Third place went to Leon Haslam, ahead of Lowes and Michael Ruben Rinaldi.

The championship gap is down to 16 between Bautista and Rea at the top, whilst Toprak Razgatlioglu moved into the top Independent slot in the championship, with his best ride of his WorldSBK career.

P1 – Jonathan Rea (Kawasaki Racing Team WorldSBK)
“Toprak did an incredible job! Congratulation to him and his team I had to wait because I had to conserve the tyres and even with that, in the end, I was struggling a bit, and I could see that he was struggling as well on the front, trying to closing the lines. I’d just kept pushing because that 25 points were important but the conditions today compared to the rest of the weekend were difficult. It was very slippery out there, so I tried my best to minimize the risk and take the maximum. This was a really good race, and now I am looking forward to Donington”.

P2 – Toprak Razgatlioglu (Turkish Puccetti Racing)
“I started from the fourth position, and after a few laps, I found a good feeling with the bike. I try to take the lead, and when I got there I kept pushing all laps, and I saw that the gap was increasing, but on the final lap Jonny caught me, and we had I fought with him! It wasn’t easy. He took the lead, I tried again, but in the end, I couldn’t get back to first place. I am pleased especially after the big crash I had yesterday, and I want to dedicate this race to my crew! Thanks to them. I am happy because this has been my best race and I will try again in Donington!”

P3 – Leon Haslam (Kawasaki Racing Team WorldSBK)
“We definitely made a good step, but I felt we were struggling a bit in the race. I had a good battle with Alex Lowes for the third step of the podium so I can’t be too unhappy, but I felt I had to manage a few little issues. I think that everybody was in the same position. The temperature is high today. I enjoy the battle! My home race is next so I can’t wait for that one”.