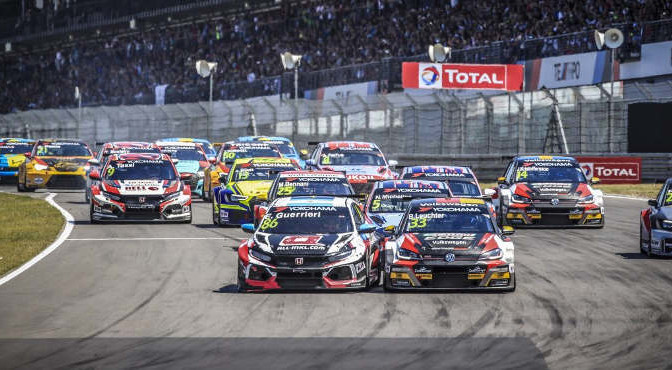 Kristoffersson, who switched to WTCR / OSCARO for 2019 as the double FIA World Rallycross champion, claimed the Race 2 laurels – and the TAG Heuer Best Lap Trophy – only to crash out of Race 3 in spectacular fashion while avoiding another incident, thankfully without injury.

Having finished sixth in Race 2, German Leuchter made the most of his DHL Pole Position to win Race 3, making it a trouble for the SLR-run Volkswagen Golf GTI TCR. In emotional scenes afterwards, Leuchter said: “It’s difficult to describe, I’m out of control. It means so much to me. My whole life is connected to this track. Everything I have done, I have done here. To win a WTCR race against these unbelievable drivers… I’m so happy.”

Guerrieri made a flying start from the second row, despite a clutch issue plaguing him for much of the warm-up lap, making the most of the gap where non-starter Rob Huff should have been beside Leuchter. The Argentinian briefly took the lead into T1, but the Golf had a better line out of T2.

At the end of lap one, Guerrieri got a strong run on Leuchter on Döttinger Hohe and almost drafted into the lead, but the home hero just clung on after some fantastic dicing. “I almost lost it there and we made contact,” said Leuchter, “but maybe it was the hand of God that saved me.”

That moment allowed Comtoyou Team Audi Sport’s Frédéric Vervisch, up from seventh on the grid, to get a run on Guerrieri and the Belgian passed the points leader on the start/finish straight to claim another second place, following his runner-up spot in Race 2. Guerrieri would settle for third, extending his points lead to 45 as main title rivals Norbert Michelisz and Thed Björk both failed to finish.

The action came thick and fast from the start. At Turn 1, Kristoffersson and fellow Golf driver Mehdi Bennani made contact, while Tiago Monteiro was spun around by Augusto Farfus. Monteiro would finish in P7, while Farfus retired to the pits, as did Björk after contact with Lynk & Co team-mate Andy Priaulx. Michelisz was out with damage caused by an incident with the fast-starting Vervisch.

Another first lap retirement was Attila Tassi, who pulled his steaming KCMG Honda off on to the grass while running fourth. Then on lap two, there was drama for Kristoffersson when he crashed heavily after going off track to avoid Nicky Catsburg, who’d failed in a bid to pass Yvan Muller and lost momentum as a result.

At the front, Jean-Karl Vernay pulled his Leopard Racing Team Audi Sport RS 3 LMS up from P15 on the grid to run just behind the top three. A top-four shootout looked on the cards for the dash to the line, but Vernay couldn’t climb higher up the order.

Gabriele Tarquini finished fifth after his fourth place in Race 2, ahead of Tom Coronel, who enjoyed his most competitive showing of the season for Comtoyou DHL Team CUPRA Racing. He finished just ahead of team-mate Aurélien Panis, from Nicky Catsburg, Gordon Shedden and Muller, making it six customer racing brands in the top 10.

Two-time FIA World Rallycross champion Kristofferson defended from the DHL Pole Position with determination at the start as wildcard entry and fellow front-row starter Antti Buri challenged. But once he’d established his lead, Kristofferson led all the way around three laps of the 25.378-kilometre Nürburgring Nordschleife. “Very nice, super happy,” said SLR Volkswagen’s Kristoffersson. “I haven’t been here since 2011, so I was looking forward to the track. It was close in the first couple of corners, but all fair and the car was good. I was cruising on the last lap, but still enjoying it.”

Kristofferson’s Volkswagen Golf GTI TCR moved to the right from the DHL pole to squeeze Buri’s AS Motorsport Audi RS3 LMS, pushing the Finn into the pitlane exit. The pair fought hard through the opening section of the Grand Prix circuit, which allowed Comtoyou Team Audi Sport’s Frédéric Vervisch to pass Buri in a great move for second place.

Out on to the Nordschleife, as Kristofferson and Vervisch opened gaps at the front of the field, Buri began to slip down the order as he struggled to maintain front-running pace, due to the addition of 20 kilograms of weight under wildcard regulations. He eventually finished in P13.

From fifth and eighth on the grid respectively, Tarquini and Huff established themselves in third and fourth, the two experienced racers running nose to tail. Then on lap three their battle ended in controversy. Huff’s SLR VW Motorsport Golf got a run up the inside of Tarquini’s BRC Hyundai N Squadra Corse i30 N TCR as they approached the Karussell, but there was contact as Huff looked set to secure third. That spun Huff around and left him stranded with heavily damaged suspension at the famous corner.

The incident allowed BRC Hyundai N LUKOIL Racing Team’s Augusto Farfus through to finish third, the Brazilian having got a run on the Italian, and join Kristofferson and Vervisch on the podium for the first time. Tarquini was able to continue and finished fourth, only to be handed a 30-second time penalty subsequently.

WTCR – FIA World Touring Car Cup presented by OSCARO points leader Guerreri was beaten off the line by Michelisz’s Hyundai i30 N TCR, with the Hungarian driver already ahead when braking for the first corner hairpin. From there Michelisz built a gap of over a second, ensuring that the slippery Honda Civic Type R TCR couldn’t reel him in with a tow along the long Döttinger Höhe straight at the end of the lap.

“My last couple of starts were pretty bad, so I guess one [time] out of five, you can do it!” said a joyous Hungarian. “We did some improvements on the car and I think this was the key to today’s race, especially the start. I’m incredibly happy for the team because the car was fantastic. I said to myself, if I’m in front, I won’t give this position away. Fortunately, the pace was good enough so I’m incredibly happy.”

Behind, Guerrieri finished well ahead of a titanic scrap over the final podium position, which his ALL-INKL.COM Münnich Motorsport team-mate Néstor Girolami recovered to score after falling behind early on. Initially passed by Frédéric Vervisch on the opening lap, Girolami’s first run to retake third was stumped by a defensive Vervisch along the two-kilometre Döttinger Höhe straight.

With Girolami taking to the grass briefly and both slowing each other down as they jostled for position, both were surprised by Rob Huff’s SLR VW Motorsport machine, which slipstreamed them to take third, though Girolami did manage to pass Vervisch’s Audi RS 3 LMS.

Girolami then managed to pass Huff on the final lap, going wheel-to-wheel down Döttinger Höhe.

Huff finished fourth but was somewhat lucky to finish at all, coming to blows with Yvan Muller at turn two on the opening lap. A natural bottleneck effect occurred with the field ploughing into the narrow and slow left-hander, with Huff diving to the inside of Muller and the pair making contact.

Muller’s Cyan Racing Lynk & Co 03 TCR picked up front-left damage that forced him to retire, and also dropped WTCR / OSCARO wildcard entrant Antti Buri (AS Motorsport) to the back, as the Finn was forced to go far off-track to avoid the stricken Muller.

Fellow Hyundai i30 N TCR runner Gabriele Tarquini was not so lucky, having initially run fifth and ahead of Huff, he was forced to retire around the halfway mark with a steering issue and continue his non-point-scoring streak at the Nürburgring.

Outside the top 10, a collision at the lap-opening Yokohama-S turn between Gordon Shedden (Leopard Racing Team Audi Sport) and Daniel Haglöf (PWR Racing) forced both drivers to retire.

Shedden had attempted a move down the inside but made contact with Haglöf, with both cars picking up damage that meant neither were able to continue.

Race 1: Norbert Michelisz (BRC Hyundai N Squadra Corse), Hyundai i30 N TCR
“I’m absolutely delighted with my first win this year. I was a couple of times close to achieving that. In the end, if I can have a choice, it would be the Nürburgring that I would like to score the first win, so incredibly happy. It was all down to the start. I saw that Esteban had some wheelspin, I don’t know what happened to him, but on the first momentum I was able to get beside him and then the race was settled after that. I was giving it 100% to get a big enough gap coming back to the main straight. Fortunately, the car was fantastic, so I was able to be confident and be able to push, and this was the key to success. But it wasn’t easy. To be honest, on the first lap I was probably checking the mirrors more than I was looking ahead. When I saw that Esteban was slowly falling behind, I kept pushing because here it’s impossible to judge whether you will lose the front tyres and he will come back toward­­­­s the end of the race. I was flat out, three qualifying laps, fortunately without any big mechanical issues.”

Race 2: Johan Kristoffersson (SLR Volkswagen), Volkswagen Golf GTI TCR
“It’s a very nice feeling and I’m super-happy. It’s been a tough start to the season so obviously to get the win now is really, really nice. I’ve been looking forward to this track since 2011. It reminds me a bit of rally and to have Benny [Leuchter] as a team-mate to learn me a bit some bits and tricks here and there. I think that helped and just to keep calm for the race and just put in the laps. The last lap I could ease off a bit and just cruise to the finish so I really enjoyed it. When [Antti] Buri just got ahead at the start sure I was concerned but I decided today is my chance to really show the performance of the Golf on this track so I was really determined to get to the Nordschleife first. Either I go there in first or I stay on the Grand Prix track. I was fighting hard there but it was all very nice and I kept my car in one piece and the car was working fantastically.”

Race 3: Benjamin Leuchter (SLR Volkswagen), Volkswagen Golf GTI TCR
“I am so happy, over the moon. This is the racing I love and what I was searching for, with the world’s best touring car drivers on this track. To be honest, the race was one of the best of my life. It was on the edge with Esteban twice on the first lap, after the start first and then at the very last corner second. It was awesome, I really wanted to win, so I pushed really hard. I connect my while life to this track. To be honest, I almost grew up here. When I was first racing in 2008 I won my first ever race on this track. To be here now racing against the best tourng car drivers in the world and to win the main race here means so much to me. Thanks to all the guys who made this happen to put me into this World Touring Car Cup, thanks to my whole family and everybody who has supported me through my whole life. I’m just so, so happy.”