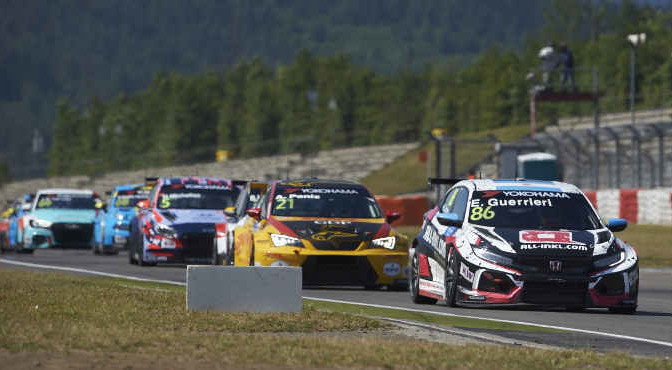 Esteban Guerrieri and ALL-INKL.COM Münnich Motorsport lead the WTCR – FIA World Touring Car Cup at the halfway point of the season thanks to a hard-fought podium finish at the Nurburgring Nordschleife in Germany.

Starting third, the Argentinian made a dynamite start to the third and final race of the weekend in his Honda Civic Type R TCR, briefly grabbing the lead on the run to the first corner, and drove a strong race to third place and his sixth podium of the year.

Remarkably, the Münnich team had helped him overcome a clutch issue that almost prevented him going to the final-race grid, and allowed him to increase his championship advantage to 45 points – that figure helped by a sixth-place finish in Race Two.

ALL-INKL.COM Münnich Motorsport continue to hold the lead in the Teams’ Championship, fittingly leaving their home event with a 68-point advantage.

Starting 24th in the day’s first race due to the noise issues that led to him being denied the chance to set a fast lap in Friday’s second qualifying, Nestor Girolami was not a classified finisher.

A radiator change between races meant he had to start the final encounter from the pitlane, but he rallied to finish 18th, a result that maintained his fourth place in the points.

KCMG’s Attila Tassi claimed the best finish of his WTCR career with fifth place in Race One. Having been involved in several tough battles, the Hungarian held his own to record the result on a track he’d never driven on prior to this weekend.

A sensational start from eighth on the Race-Three grid brought him up to fourth spot immediately, but an engine issue put him out on the first lap as he looked to challenge for a podium finish.

Team-mate Tiago Monteiro was 14th in Race Two to record KCMG’s first double-points finish in WTCR, and the Portuguese made a strong start in Race Three as well.

Unfortunately he was spun at the opening corner by a rival and was relegated to the tail of the field. He recovered to 17th.

The next races take place at Vila Real, Portugal, in two weeks’ time.

Esteban Guerrieri 86
“This is such a good way to end the weekend. A podium yesterday and now another today and we lead the Drivers’ and Teams’ Championships. I was quite worried in the pitlane before Race Three because I had a clutch issue and I thought I’d be stuck, but my guys worked hard to fix it and two corners from the end of the formation lap, everything started working again. I made a great start, had a tough, but fair fight, with Benni [Leuchter] and scored some very good points. I probably drove a bit more aggressively than Dominik [Greiner, Team Manager] wanted, but I was thinking about the result, not the points. I’m very happy.”

Nestor Girolami 29
“It’s been a tough day, but we knew it would be after the noise issue in qualifying that left us at the back. I had a high water temperature in the first race so I decided to pull out of the fight to save the engine, and I had an issue with the splitter too, but the guys did a great job to change both pieces before Race Three. I had to start from the pitlane because they ran over the time limit, but this was probably a blessing because of the crashes at the first corner. I’m still fourth in the points because of my podium yesterday and because our big rivals did not score well, so the battle is still 100 per cent alive.”

Attila Tassi 9
“I’m very pleased to have my best performance in the WTCR and also score my best result with fourth. I made a good start in Race Two, but my rear tyres weren’t up to temperature so I went sideways at the first corner. Then I got blocked aggressively, which let another car pass me. I could already feel I didn’t have full power, but I was able to go faster than the cars I was with on the Nordschleife. In Race Three I positioned myself well, got up to fourth and again pulled a gap on the Nordschleife, but I got the ‘low oil pressure’ alarm and then had to stop the car. I could have had good points there, but that’s racing…”

Tiago Monteiro 18
“While it’s good to be back in the points, I think it should have been better given the pace we had in race trim. I was hit at the start of both races; most significantly in Race Three where [Tom] Coronel spun me at the first corner. From there, you’re always playing catch-up. I’m still feeling good because I have 24-hour race to come here at the Nurburgring with the Civic Type R TCR and we’ll fight to be on the podium at the very least.”

Dominik Greiner
Team Manager
“This was an amazing weekend for us. We’ve increased our lead in the Drivers’ and Teams’ Championships and seen our key rivals not have the kind of scores that we expected, so it’s helped us. Esteban did a fantastic job all weekend to take two podiums and Bebu could have done the same if it had not been for the noise issue in qualifying that wasn’t anybody’s fault. I have to say what an amazing job the guys did to change Bebu’s radiator between the races today and to get Esteban’s clutch working again because without this, we wouldn’t have had the same number of points. As a German team, we’re incredibly proud to leave our home circuit leading the WTCR.”

Dario d’Esposito
Team Principal
“I’m thrilled for Attila. Fourth position is the least he deserves after an outstanding performance on his first time at the Nurburgring. He made a mistake at the first corner, but he learnt from it and made a fantastic start in Race Three. It’s a shame that he’s had his engine issue that’s prevented him from maybe being on the podium. Now everyone can see what he’s capable of. Tiago had a tough day and was hit in both races.”