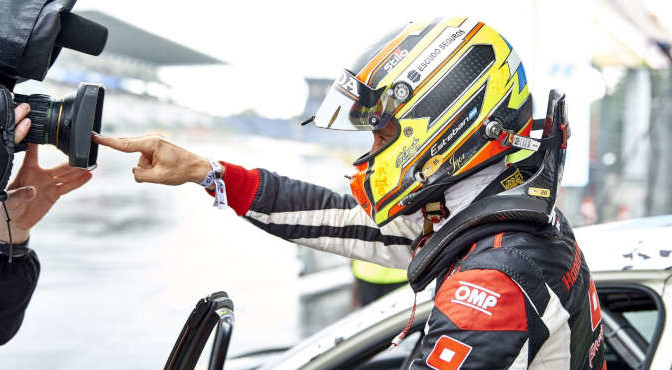 Esteban Guerrieri claimed a record-breaking pole position at the Nurburgring to increase his lead in the WTCR – FIA World Touring Car Cup.

The ALL-INKL.COM Münnich Motorsport driver was first on-track in a wet qualifying session and immediately set a pace nobody could match with his opening gambit.

With several incidents creating a number of Code 60 ‘slow zones’, and the rain then intensifying, nobody was able to deny the Argentinian his second pole of the season and the third for the Honda Civic Type R TCR.

At 6.032 seconds, Esteban’s margin over second place was the largest in WTCR history, and at 10m30.955s, it also took longer than any other pole position since the series began. It secured his status as the WTCR’s best-performing driver in qualifying too.

He will start third in Race Three and eighth on Race Two’s partially-reversed grid after another strong performance in a damp, but drying, evening qualifying, which was affected by a Code 60 in the final sector when the track was at its best in the final minute.

Team-mate Nestor Girolami followed Esteban’s example of heading out early for Q1 and was rewarded with third on the grid.

Having set the fastest first-sector time of Q2, he looked set to repeat the performance. Unfortunately, he was called into the pits by race officials for exceeding noise limits and was unable to complete his lap. He starts Race Two and Three from 24th place.

KCMG’s Attila Tassi scored a fantastic result in Q2 with a career-best eighth place on the grid; a result that should have given him third on Race Two’s partially-reversed grid. Unfortunately, a 10-place penalty for speeding in the Code 60 zone drops him to 13th.

Having never driven on the 25.1km Nordschleife before morning practice, the Hungarian was one of the star performers and made the most of his Civic Type R TCR’s excellent handling characteristics.

Team-mate Tiago Monteiro was also on-course for a top-10 result, but lost time as he exited the Code 60 ‘slow zone’ with a technical issue. He still scored his best qualifying result since the Marrakech season-opener with 14th.

Tiago and Attila start Race One from 19th and 20th positions.

Esteban Guerrieri 86
“I knew today was going to be an important day; one that would define whether we would lead the championship at half-distance or be caught. Pole and third are great results and give us a good shot at winning at least one race, as well as increasing our lead in the championship. The car was very good in the drying conditions and it was a very good strategic call to go out right at the start of Q1, because the yellow flags and Code 60s meant nobody could do a fast lap to challenge us after the 10-minute mark. In second qualifying it was obvious the track would dry so I did one lap on wets, one with a mix and one on slicks, which was good for third. Coming through the fourth sector the steam was rising from the track and it was like driving through a cloud; it’s one of the most intense experiences I’ve had in a racing car and I’ll remember it for a long, long time.”

Nestor Girolami 29
“We had one very good qualifying session and one very bad one. The lap in Q1 was very good and the whole performance with Esteban and myself was very good from the team, so we’re in a good position to score big points. In Q2 I went purple on my last lap, but then I was called in for exceeding the noise limit and the race officials wouldn’t let me go back out, so I missed the driest part of qualifying and start 24th twice. We have to do a thorough investigation of what happened and make sure it doesn’t affect our chance of finishing on the podium tomorrow.”

Attila Tassi 9
“I’m extremely happy tonight to have my first top-10 qualifying in WTCR and at a track I’d never driven on before today. This is a circuit where you need big balls, and many drivers have told me I have them! But you can’t just be brave; you need a great car too and the Honda was excellent. We’ve worked very hard as a team to improve things and I think by going 13th in FP1, we showed that we have. I lost most of FP2 when I lost power and we couldn’t fix the car in time to go out. In Q2 we just got everything right. I risked it all on a lap with full slicks at the end and it paid off. It’s a shame we had the Code 60 at the end, or I think I could have been even higher. Unfortunately I got a penalty for speeding in the Code 60 zone, though I thought I was right on the limit, but I’m still confident we can score some good points.”

Tiago Monteiro 18
“We’ve worked very hard to improve the situation and I think practice showed we’ve done that with the speed we could produce. Both qualifying sessions were very unpredictable though. This afternoon we had a pretty ridiculous situation with Code 60s and double-yellows for 30 minutes of a 40-minute session, and this evening the conditions were very tricky. We had a Code 60 at the end and when I came out of the slow zone, the car wouldn’t come off its speed limiter straight away, so I lost a few seconds. Without that I think I’d have been in the top 10 and maybe on reversed-grid pole. The aim is definitely to score points and start working our way back up the championship.”

Dominik Greiner
Team Manager
“Pole position and third place are very good results for Esteban, not just because of what it means for the races, but because we’ve also added some points onto our leads in the Drivers’ and Teams’ Championship with the bonuses, and this is very important. It was a great strategy call to send both Esteban and Bebu out in Q1 straight away and we benefited hugely from it because of the yellow flags. It’s a shame for Bebu about what happened with the noise of his car, but we will investigate this thoroughly and make sure he has the best chance possible for tomorrow’s race.”

Dario d’Esposito
Team Principal
“The work we’ve done behind the scenes pays off every time, but here we can really see it in the results. We’re very proud of Attila because his last lap here that put him eighth was only his fifth lap around the Nordschleife ever! That’s a fantastic achievement. He made some excellent preparation with the simulator and watching videos, so he’s done a very good job. Tiago also did well and had he not had his issue in the Code-60 zone, we might even be looking at a reversed-grid pole. Tomorrow’s race will be tough and we just have to get through it, but on Saturday we have a really good chance of four points finishes and this is our aim 100 per cent.”