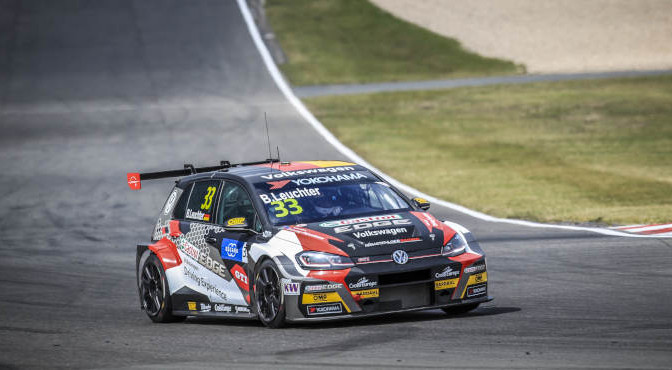 “I saw very early that the track was drying up, I informed my team to get the slicks on the side and the team did a fantastic job and at the right moment they gave me the tyres,” said Leuchter. “I just went out and smashed the time. This is for the guys because they’ve worked so hard since Marrakech, we were quite confident at Zandvoort coming to our home race here at the Nürburgring and I really appreciate it to stand on the pole position.”

With track conditions more consistent than in First Qualifying, the gaps between the 27-strong #WTCR2019SUPERGRID were incredibly close despite the monstrous 25.378-kilometre length of the Nürburgring Nordschelife circuit.

Nicky Catsburg slotted his BRC Hyundai N LUKOIL Racing Team i30 N TCR into third after the early running, with Daniel Haglöf muscling his PWR Racing CUPRA in between Catsburg and his Hyundai-powered team-mate Augusto Farfus.

However, Catsburg’s running was curtailed when he damaged his front-left suspension striking a crash barrier, which forced the Dutchman to crawl back to the pits. There was no time for repairs and he ended up P23.

But as the track conditions continued to improve, the lap times fell dramatically with Leuchter returning to the top of the order, 0.083s quicker than Huff.

The German’s joy was brief, however, as team-mate Johan Kristoffersson, who was quickest in Free Practice 2, became the first driver to break the 10-minute mark with a 9m57.497s effort before wildcard entrant Antti Buri then usurped Kristoffersson; the Finn 0.206s faster in his Audi.

But eventually it was Leuchter who would prevail, again edging out Huff with the pair separated by just 1.482s in the final classification as a late flurry of position changes made for a dramatic end to the session, which included a heavy crash for Haglöf.

After spending the majority of the session outside the top 15, Guerrieri stormed up to third ahead of BRC Hyundai N Squadra Corsa duo Norbert Michelisz and Gabriele Tarquini, and SLR’s Mehdi Bennani.