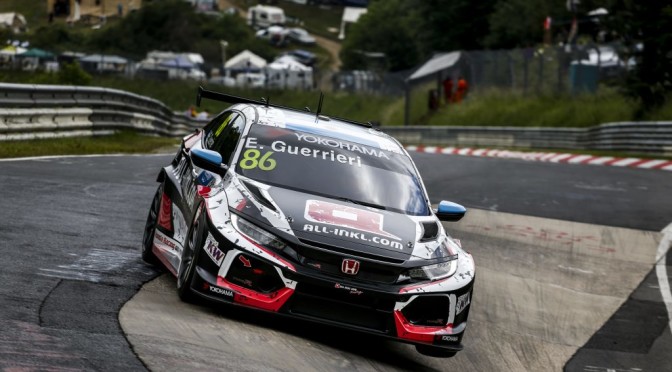 Esteban Guerrieri secured the DHL Pole Position in First Qualifying for ALL-INKL.com Münnich Motorsport at WTCR Race of Germany in a rain-hit session on the Nürburgring Nordschleife – after listening to his wife’s advice.

Guerrieri powered his Honda Civic Type R TCR to an early 10m30.955s best, some 6.032s quicker than BRC Hyundai N Squadra Corse driver Norbert Michelisz and another 0.156s faster than team-mate Néstor Girolami. And his initial pace would prove decisive as yellow flags and worsening weather conditions helped his cause.

“I listened to Mariela my wife,” Guerrieri explained. “She said before I went out, ‘listen, put a good banker lap in’. I listened to her and here I am. But it was the kind of intense moment you have here at the Nordschleife. We went into qualifying not knowing what to expect. I just put the lap all with the feeling, not thinking too much but understanding where the lines were right. The lap was really good and it was luck there were yellow flags and more rain afterwards. This luck can sometimes play in your favour, but we needed to do a good lap and we did a really nice one, so thank you to the team, the Honda worked really good. I am very happy.”

The battle for the DHL Pole Position was effectively decided after Nordschleife rookie Mikel Azcona crashed his PWR Racing CUPRA TCR and a Code 60 – which requires drivers to reduce their speed to a maximum of 60kph through a designated section – was deployed to enable the car’s recovery. Delays removing the damaged car, coupled with worsening weather conditions, cancelled out any meaningful running thereafter and the provisional Race 1 grid was largely set.

Huff and Kristoffersson had each topped one of the morning’s practice sessions but were unable to replicate that form in qualifying.