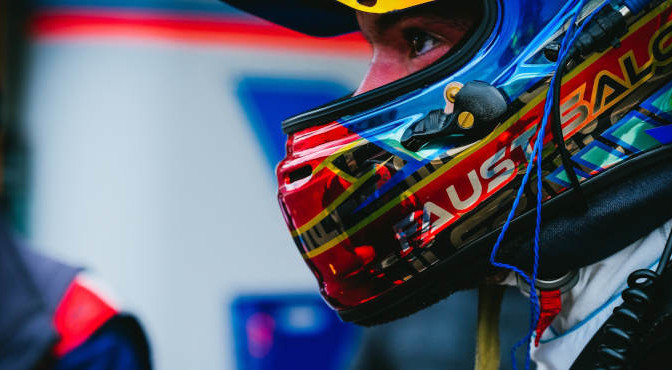 The Spaniard delivered a strong performance making his first appearance at the Belgian track, which hosted the second round of the 2019 GT Cup Open season, securing a front-row start for the Teo Martín Motorsport-run McLaren 570S. But it left him with a bittersweet taste as the young Spaniard GT ace couldn’t seal a podium finish despite he ran in contention during his stint

Faust Salom headed to Belgium last weekend for the second venue of the Pan-European GT Cup Open championship, in which he is currently contesting driving a McLaren 570S entered by Teo Martín Motorsport. Despite it was his first appearance at Spa-Francorchamps and the 7-kilometer long circuit is full of challenges and unexpected surprises, the Spanish driver of the McLaren’s Junior Team programme showed an extremely quick adaptation period thanks to previous preparation including physical and mental training and simulator development with Teo Martín Motorsport.

On Friday, Salom posted quick lap times in the second free practice session despite Faust himself and his teammate Guillem Pujeu completed limited mileage in the morning due to minor technical issues, which were promptly solved by Teo Martín Motorsport and his team. Salom clocked a quickest lap time of 2m33.260s, which was improved by far on Saturday during the first qualifying session. The Spaniard kept in pole position contention for the entire qualifying session and finally qualified second with an impressive lap of 2m27.281s, a mere three tenths off the pace. Later in Race 1, consisting of 50 minutes, Salom ran in podium places during his stint before handing over to Pujeu. Unfortunately, the latter didn’t have the pace to keep the charge for a rostrum finish and took the checkered flag in seventh place. On Sunday, Pujeu took the seventh spot on the starting grid with a lap time of 2m28.019s but tire issues dashed their chances to improve a 11th place finish. Salom and Pujeu also finished fifth in Pro-Am class.

“For sure it was a bittersweet weekend. Spa is the most amazing race track I’ve never been so far and every corner and every area brings me back memories of this amazing circuit. I learnt so much and thanks to my preparation for the event I was able to have strong pace from the very beginning. I felt comfortable with the car and the circuit and I almost scored the pole position, finally missing it by a few tenths. I knew we good strong pace and it was proven on Saturday, despite I was trying to save tires for Guillem. Surely, tires were our weak point throughout the weekend because we started to struggle after five laps”, explained Salom. Faust underlined that “we felt confident about our podium chances for Sunday, but problems with our rear tires ruined our chances. It was frustrating because we have the pace to be frontrunners, in fact my qualifying result proved it, but we couldn’t convert it into good results. But we are full of optimism as I feel confident about our chances in Hungary. Our first podium awaits there!”