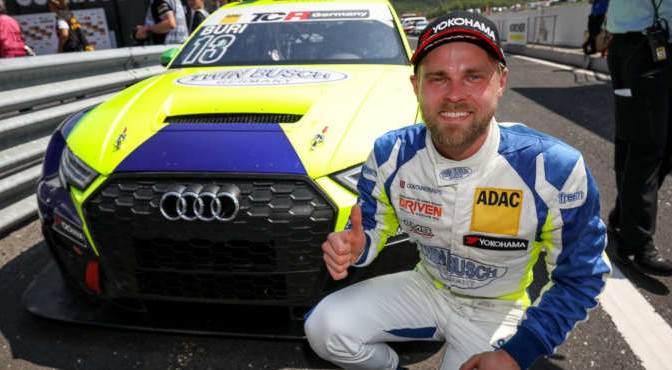 Finn set for WTCR Race of Germany action in Audi RS 3 LMS *TCR Germany race winner joins #WTCR2019SUPERGRID at world’s toughest track *Buri: “I know how close the racing is and how small the gaps are”

Antti Buri will have his sights set on the top 10 when he makes his debut in the WTCR – FIA World Touring Car Cup presented by OSCARO at the legendary Nürburgring Nordschleife in Germany from 20-22 June.

Driving an Audi RS 3 LMS for the new AS Motorsport team that he’s helped to establish, Buri becomes the first driver from Finland to race in WTCR / OSCARO. And having won in the highly-competitive ADAC TCR Germany series, the ex-single-seater racer is ready for his next challenge.

“The WTCR – FIA World Touring Car Cup presented by OSCARO has always been a big goal for me,” said the 30-year-old from the southwest Finnish city of Turku. “I’ve been racing in ADAC TCR Germany since 2016, I’ve been racing TCR cars on an international level in the 24H Series and as the opportunity came to step up to world level, I grabbed it now with the wildcard entry.”

The FIA WTCR / OSCARO regulations require wildcards to run with an extra 20 kilograms in their car. But Buri hopes his knowledge of the 25.378-kilometre Nürburgring Nordschleife will help to offset some of that potential disadvantage.

“These are the rules, and they are the same for every wildcard, so no excuses,” said Buri. “Obviously, extra weight doesn’t help us, but my knowledge of the track should be good as I have done two 24-hour races on the Nordschleife. Last year, together with my team-mates, I won the TCR class of the Nürburgring 24 Hours. But endurance racing is not sprint racing. Also, I have never raced the Audi RS 3 LMS on the Nordschleife. But generally speaking, I know the car very well, it has been my race car in ADAC TCR Germany since 2017, and I have clinched three wins this year already.”

Buri, who describes the Nürburgring Nordschleife as “something between a special stage and a highway”, is aiming for a top-10 finish at WTCR Race of Germany. “There can’t be any doubt about the level of the #WTCR2019SUPERGRID with so many world champions and winners of other top categories. I’ve closely followed the WTCR on television and on the internet, so I know how close the racing is and how small the gaps are. If you are a little bit off the pace, you’re way back. We will be quite satisfied if we are in the top 10, which is my personal goal. But honestly, it’s simply great to be part of this for one weekend. I’m sure I’ll enjoy every second of it.”

Why it’s a family affair for Buri
Antti Buri isn’t the first member of his family to compete with Audi power, as he explained. “Racing an Audi is a tradition and a family affair for us as my father, Risto, rallied an Audi 200 quattro in the 1980s, so it’s great to be part of the next generation to continue with the four rings. I will be the first driver to fly the Finnish flag in WTCR. As I am a big fan of touring cars, you can imagine that it makes me proud to carry the Finnish colours on the grid.”