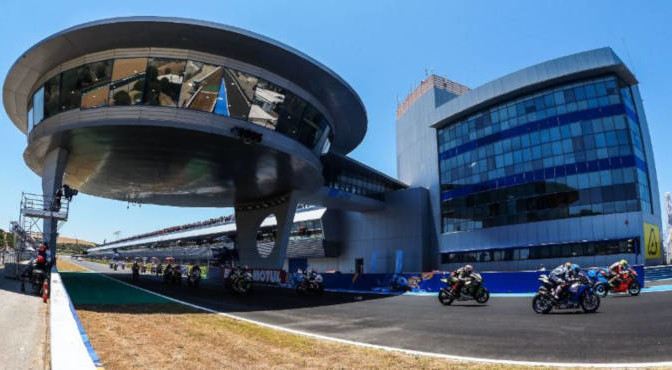 In what was a thrilling Race 2 at Jerez, an uncharacteristic error from Alvaro Bautista (ARUBA.IT Racing – Ducati) at the start of Lap 2 saw the Spaniard suffer his first racing crash in WorldSBK. The battle for the win came alive as Jonathan Rea (Kawasaki Racing Team WorldSBK) and Michael van der Mark (Pata Yamaha WorldSBK Team) went head-to-head in the Spanish sun, resulting in the Dutchman taking his first win of 2019, whilst Razgatlioglu romped to third and yet another podium.

Into Turn 1 on the opening lap, Marco Melandri (GRT Yamaha WorldSBK) took the initial advantage, whilst a disaster for his fellow Yamaha rider Alex Lowes (Pata Yamaha WorldSBK Team), who crashed at Turn 2 on the opening lap. Bautista took the lead at Turn 5 and Michael van der Mark followed him through as Melandri went wide. Jonathan Rea took the pair of Yamaha riders at Turn 6, in a bid to pursue Bautista at the front.
However, it was a disaster for the Spaniard at the beginning of Lap 2 as he crashed out of the lead! The championship leader was on the floor at Turn 1, with his ARUBA.IT Racing – Ducati tumbling through the gravel. Bautista remounted but retired soon after. The race was now on, as Jonathan Rea led van der Mark and Marco Melandri, ahead of Toprak Razgatlioglu and Chaz Davies (ARUBA.IT Racing – Ducati) completing the top five.

With 15 laps to go, the top five were covered by a second but disaster struck again, this time at Turn 5, as Marco Melandri attempted an ambitious pass on Davies, resulting in both riders crashing out. Davies was clearly frustrated with his former teammate, as both of them lost the chance to achieve a good result with Bautista out. Three of the main protagonists had suffered terrible results – Jonathan Rea was now looking like he was going to walk away from Jerez with a strong haul of points.

Michael van der Mark wasn’t prepared to let Rea have it all his own way, as the Dutchman took the lead with 14 laps to go at Turn 6. Jonathan Rea initially stayed with the Yamaha of van der Mark but couldn’t keep with the relentless pace of the 26-year-old out front, as 10 laps later, he had pulled out a two seconds lead. Alvaro Bautista had re-joined and was circulating in 16th position, ready to pick up the pieces in case anyone else was to crash out.

Battles continued to develop down the field, as Michael Ruben Rinaldi (BARNI Racing Team), who rocketed through from 11th on the grid to be the top running Ducati in fourth position, ahead of a jostling Sandro Cortese (GRT Yamaha WorldSBK) and Leon Haslam (Kawasaki Racing Team WorldSBK), with the Brit getting ahead of the German in the closing stages at Turn 1.

A crash for Ryuichi Kiyonari (Moriwaki Althea Honda Team) at the fast Turn 11 resulted in gravel being put all over the circuit and a red flag coming out with two laps to go. Kiyonari walked away from the crash, although his bike was not so fortunate, having barrel rolled.

Michael van der Mark was a winner once again completing a faultless weekend, right the way through from FP1 to Race 2. Second position and closing the gap down to Bautista in the championship to 41 points, Jonathan Rea was happy to be back on the podium. It was another stunning ride from Toprak Razgatlioglu to complete the race in third position. Rinaldi took a career-best fourth, whilst Leon Haslam fought hard to complete the top five.

P1 – Michael van der Mark (Pata Yamaha WorldSBK Team)
“My plan today was to fight with Alvaro Bautista, but unfortunately he crashed, and I hope he is ok. After that, it was Johnny and me, and I was following him trying to pull away from Toprak, but his pace wasn’t as fast as I expected, so I passed him and just tried to do my rhythm. The bike felt so much better today compared to yesterday. Big thanks to the team because this weekend they did an incredible job and from Friday morning I was feeling comfortable on the bike. I am proud of my first win of the season”.

P2 – Jonathan Rea (Kawasaki Racing Team WorldSBK)
“That was a real podium for us today. We made the bike better compared to yesterday, so I had to thank my team. I had a little bit more front end feeling, but Michael’s pace was incredible, and even with the heat, he made the same race pace as the race winner yesterday. It was a very tough weekend from all aspects, but we had to consolidate it today, and we got some points back in the championship. Now we move on to Misano where we had a strong test last week, but the biggest thing is thanks to my team for all the confidence this weekend and making the bike step by step better”.

P3 – Toprak Razgatlioglu (Turkish Puccetti Racing)
“I am really happy! The Tissot Superpole Race didn’t go well for me because we used a different setup that didn’t work well for me. We decided to return to the old one for Race 2 and I felt good on the bike again. I am pleased to be on the podium again after Imola, and now we look forward to continuing like this also for next race”.