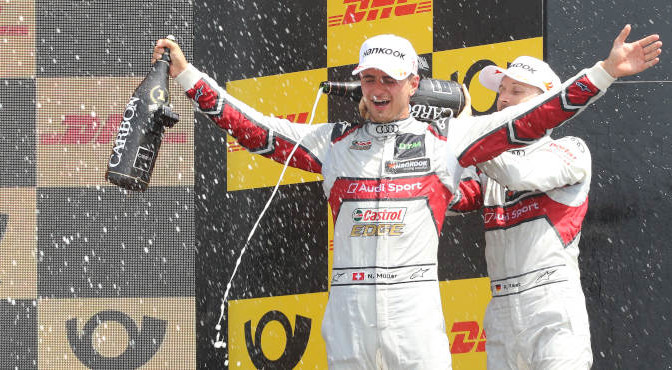 A canny win: Nico Müller (SUI) scored a dominant win in Sunday’s DTM race at Misano (Italy). The Audi driver not only made a good start, but also ticked all the boxes in terms of race strategy and tyre management. However, his second DTM career win – and the first for Audi Sport Team Abt Sportsline for 624 days – wasn’t the day’s only story. Title hopefuls Marco Wittmann (GER, BMW), René Rast (GER, Audi) and Philipp Eng (AUT, BMW) also added considerably to the day’s entertainment value.

Around the halfway point, Eng looked likely to be the one to profit most from a series of dramatic situations. On lap one, Wittmann suffered a clash with Eng and Jonathan Aberdein that caused steering damage and forced him to retire. On lap 14, disaster struck for pole-sitter René Rast as he lost valuable time due to a left-rear puncture while in the lead. After that, he found himself involved in a thrilling duel with Eng, in which the Austrian came out on top on lap 21 to secure his fifth podium finish of the 2019 season. As a result, Eng finished second within a group of four Audi drivers. There could have been five, had it not been for Joel Eriksson (SWE, BMW), overtaking Jonathan Aberdein (RSA, Audi) with a breath-taking manoeuvre around the outside on the final lap.

Guest driver Andrea Dovizioso (ITA, Audi) experienced the entire spectrum of highs and lows in Sunday’s race. On lap three, the MotoGP star had worked his way up into ninth place, only to have to surrender the position after the pit stops. A high-speed spin on lap 30 ended his charge, but, without any damage, he kept going to the chequer, finishing 15th behind the Aston Martins of Ferdinand von Habsburg (AUT), Jake Dennis (GBR) and Daniel Juncadella (ESP). Nevertheless, the motorcycle ace convinced with speed, tireless efforts and entertaining manoeuvres in his first two DTM races.

» Quotes – race 2, Misano
“We had a great atmosphere during our second DTM event at Misano and we got to see two good races. Audi and BMW won one race each and newcomer Aston Martin has shown its potential on occasions. Andrea Dovizioso’s participation has created huge interest and passion. ‘Dovi’ has left a strong impression, he was quick out of the box with a car that he wasn’t used to. For me, that wasn’t a surprise. MotoGP drivers are dealing with an unbelievable power-to-weight ratio on a daily basis. They know what grip is. And they know how to deal with tyres.”
Gerhard Berger, Chairman ITR e. V.
“Just fantastic. We have worked extremely hard for this victory. The new cars are a delight to drive, but they also require a lot of work by the mechanics. The guys have deserved this and I think so have I. Saturday could have gone better as we are always aiming at perfection. That is seldom achieved. From that perspective, this victory is a really, really great feeling.”
Nico Müller, winner
“From ninth on the grid, you can’t expect to make it onto the podium in the DTM. Today, I have to take my hat off to my team for having done an outstanding job. I have tried to make the tyres last throughout the distance in the heat we had today and I managed. Of course, these points are really valuable.”
Philipp Eng, 2nd place
“I didn’t have a good start and some contact on the opening lap as well. Then the puncture on top of that – things didn’t really go well today. Therefore, third place is a really good result. At Team Rosberg, we are an experienced team where everyone knows what he is doing. Today, we could have achieved more together. But I am not unhappy.”
René Rast, 3rd place
“I have really enjoyed the weekend in the DTM. These cars are nice to drive. They have plenty of power, speed and downforce. But keeping up with drivers at this level is difficult. All in all, however, it was a good experience.”
Andrea Dovizioso, 15th place
» Results – race 2, Misano
01. Nico Müller (SUI), Audi, 38 laps in 57m 37.468s
02. Philipp Eng (AUT), BMW, + 7.628s
03. René Rast (GER), Audi, + 16.804s
04. Robin Frijns (NED), Audi, + 20.072s
05. Pietro Fittipaldi (BRA), Audi, + 20.430s
06. Joel Eriksson (SWE), BMW, + 23.645s
07. Jonathan Aberdein (RSA), Audi, + 24.813s
08. Bruno Spengler (CAN), BMW, + 28.460s
09. Sheldon van der Linde (ZAF), BMW, + 29.003s
10. Mike Rockenfeller (GER), Audi, + 47.798s