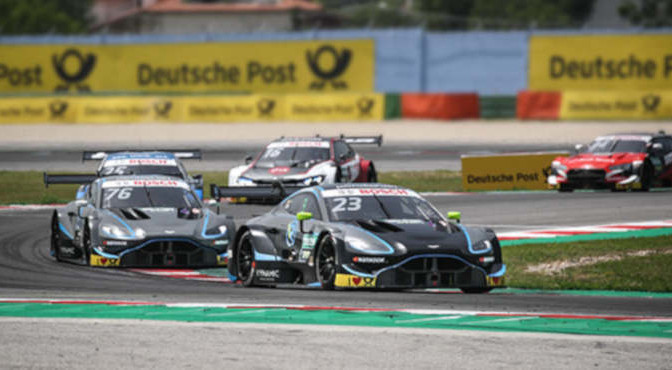 R-Motorsport faced up to the challenges of Misano in the fifth DTM race of the season, gaining valuable experience with the new Aston Martin Vantage DTM.

For the third race weekend of their debut season, R-Motorsport are at the Misano World Circuit Marco Simoncelli in Italy where the DTM is being contested for the second time. R-Motorsport’s budding team of four drivers started the fifth race of the season from the second half of the grid.

Ferdinand von Habsburg (21, Austria) decided to pit soon after the very first lap and benefited from the safety car deployment that followed shortly thereafter. This strategy brought him up into P2 for a time after all drivers had completed their mandatory stops. In the end, though, he had to contend with tyres that were degrading and unfortunately, just missed his second points-scoring finish in the DTM in P14.

Daniel Juncadella (28, Spain) also had his sights set on a finish in the Top Ten before his pit stop on Lap 15 but just missed out, coming home in P13. Team-mate Jake Dennis (23, Great Britain) was directly behind Daniel for a long time. The British driver posted the longest first stint of anyone in the field and it was not until Lap 17 that he came in to change tyres. He finished the race in P15.

Paul Di Resta (33, Great Britain) won the first ever DTM night race at Misano last year. This year, though, the Scot had a tough first race and was forced to retire in the pits with a technical problem a few minutes before the end. He came in for his scheduled pit stop on Lap 16.

After the first two race weekends at Hockenheim and Zolder, the team can look back on a promising start to the season, in which they were able to score points with at least one driver in the first four rounds of the season. As a result, all of the team’s four drivers have taken points in the series, including the two DTM rookies, Jake Dennis and Ferdinand von Habsburg.

This has been a remarkable team effort by the team, who completed the first test with the new Aston Martin Vantage DTM just two months before its race debut. In view of the fact that the cars were developed and built in the record time of just 90 days, the team view the first race weekends of this season as “test drives under competitive conditions”.

The outfit will have another chance to gain more experience with the Aston Martin Vantage DTM on Sunday, but before the drivers tackle the second race of the weekend at 1:30 pm (live stream from 1:00 pm onwards), they will fight for positions on the grid for the sixth race of the 2019 DTM season at 10:45 am (live stream on ran.de).

Daniel Juncadella
Qualifying: P14
Race: P13
Start number: 23
Car: Aston Martin Vantage DTM
“My start was excellent and I was able to move up three places on the first lap. I was in the Top Ten after the re-start and having a lot of fun in the race. However, I had to use my entire DRS allocation to keep up with the group. For my pit stop, we tried the undercut and I stopped earlier. I was able to catch up with Timo towards the end of the race but lost time to him when my DRS ran out and my tyres finally began to degrade. My scrap with Andrea Dovizioso on the last lap was excellent and certainly nice for the Italian fans to watch.”

Ferdinand von Habsburg
Qualifying: P16
Race: P14
Start number: 62
Car: Aston Martin Vantage DTM
“The positive thing about today is that on the harder strategy, I was able to finish the race just behind Dani. That means my pace was good. Unfortunately, it wasn’t good enough to do what Marco Wittmann did today. All in all, though, I can be proud of my race. The car moves around a lot, and the track is a bit like a go-kart circuit. You can really enjoy it and have a lot of fun drifting. There’s an exciting battle going on within the team at the moment, and we’ve now got to work on increasing our race pace.”

Jake Dennis
Qualifying: P13
Race: P15
Start number: 76
Car: Aston Martin Vantage DTM
“It was a tough race, both physically and mentally. Basically, we were not fast enough, unfortunately, and tyre degradation was relatively high. Apart from that, I was a bit on my own without any major difficulties in the race. Over the last twenty minutes or so, I then just concentrated on trying to get the car home in one piece so that I can attack again tomorrow.”

Paul Di Resta
Qualifying: P17
Race: retired (classified P16)
Start number: 03
Car: Aston Martin Vantage DTM
“I found the going tough today. We took a new direction in qualifying, which didn’t work out, unfortunately. We were down on performance in the race. I’m now looking forward to tomorrow. Of course, it’s hard, but we’re doing everything we can to solve the problems. In our situation, bad days are just as important as good ones in order to gain as much experience as possible.”

Dr Florian Kamelger, R-Motorsport Team Principal
“Unfortunately, it wasn’t enough for a points-scoring result for the first time this season. Ferdinand pitted for tyres just after the first lap, which then meant that despite putting up a strong fight, he eventually dropped out of the Top Ten with tyres that were degrading badly and Daniel in P13 was the best-placed Aston Martin driver ahead of Ferdinand. Jake did an excellent job of staying in the midfield until his stop for tyres but was unable to finish higher than 15th. We’ve not yet been able to analyse the data to see why Paul was forced to retire shortly before the end. Today’s race has shown that we still have plenty to do. However, we will continue to steadily improve our performance bit by bit until we can compete up front.”