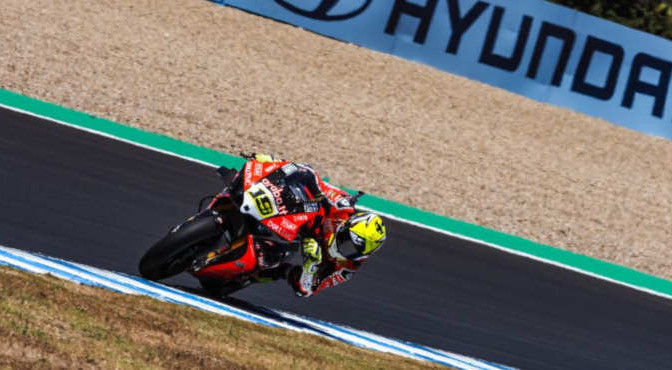 Day one at Jerez has concluded for the MOTUL FIM Superbike World Championship, with Alvaro Bautista (ARUBA.IT Racing – Ducati) putting in a late lap in FP2 to go top. Despite a late red flag after a spectacular crash for Loris Baz (Ten Kate Racing – Yamaha) left gravel and debris on the track at Turn 4, a flurry of action concluded the session with many changes in positions.

Championship leader Alvaro Bautista (ARUBA.IT Racing – Ducati) was on top in FP2 for the majority of the session before being knocked off his familiar perch by van der Mark for a brief moment. The Spanish rookie, who has raced at Jerez many times, went back on top in the closing stages with the fastest lap of the weekend. Chaz Davies (ARUBA.IT Racing – Ducati) had a tough day at the office, but you can never discount the Welshman; the former WorldSBK runner-up finished eleventh overall.

Michael van der Mark continued his strong performance from the morning session, becoming the first rider to go into the 1’39s in FP2, improving in the final five minutes to consolidate his strong pace. His teammate, Alex Lowes (Pata Yamaha WorldSBK Team) was again a prominent figure at the sharp end, ending the day in fourth, with the Pata Yamaha pairing enjoying the return to Jerez.

The Kawasaki Racing Team WorldSBK strategy for Jonathan Rea looked to be to send him out and get him to dial laps in, with the reigning four-time WorldSBK Champion setting numerous consecutive fast laps. On his tenth lap, Rea improved his time before finally improving to third on the combined timesheets, improving his time in the latter part of the session but remaining in third. His teammate Leon Haslam completed the day in ninth in the session and overall.

2013 World Superbike Champion Tom Sykes (BMW Motorrad WorldSBK Team) didn’t improve his time overall until very late in the session, placing fifth overall, ahead of Tissot Superpole on Saturday. Whilst Sykes showed strong signs of improvement, Markus Reiterberger (BMW Motorrad WorldSBK Team) was out on track for the first time. With no lap time set in FP1, FP2 proved crucial for the German rider, who finished 15th at the end of the day.

A strong start in FP1 for Melandri saw the Italian crash in FP2, albeit with himself being OK and riding the bike back to the pits. He finished sixth on combined times. Teammate Sandro Cortese improved his time and completed the day in seventh, with a strong end to FP2. It has been a strong start for Yamaha at the Acerbis Spanish Round, with four in the top seven.

In eighth place, Michael Ruben Rinaldi (BARNI Racing Team) enjoyed a strong FP2 and maintained his top ten placing from FP1. The Italian was the second Ducati in the session and also, the third Independent team rider behind the GRT duo. Turkish Puccetti Racing rider Toprak Razgatlioglu finished tenth at the end of the day.

WorldSBK returnee Loris Baz was back with a bang, as he had a massive crash at Turn 4, although he was OK. His bike cartwheeled through the gravel trap, bringing out a momentary red flag for debris.