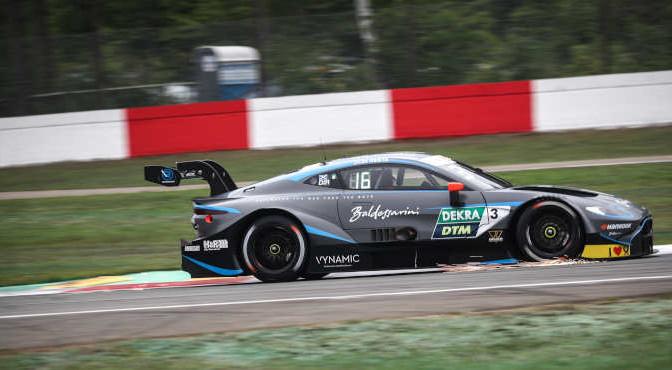 R-Motorsport face a fresh challenge as their first season in the DTM continues. The outfit’s successful race debut at Hockenheim, including their first kilometres in the lead, was followed by the DTM’s return to Zolder. At the third race meet of the season this weekend in Misano, they now face a very different circuit layout and high temperatures.

The 4.22-km circuit appeared as a night race on the DTM race calendar for the first time last year. The track consists mainly of slow and medium-fast passages but also has two fast turns and three longish straights. Finding the right setup poses a tough task for drivers and engineers in view of the many different types of corner encountered.

Apart from the demanding layout, temperatures are expected to be high and will, no doubt, greatly affect cars and especially tyres. And so, the teams must try to get the best out of tyres under the conditions, which could engender some interesting strategies and produce plenty of overtaking manoeuvres in the races.

Paul Di Resta was successful at the ‘Misano World Circuit Marco Simoncelli’ as the DTM staged its races there for the first time last year. The 2010 DTM champion’s name was entered in the record books at the circuit in 2018 as the first pole-sitter and first winner during the DTM’s premiere in Misano.

“I’ve got some really great memories of Misano from last year,” said Paul. “I won the first DTM race there from pole position and what’s more, in the dark! The circuit demands a very special rhythm from drivers with its combination of medium-fast corners and slow hairpin bends.”

Following last year’s night premiere, the DTM will be deploying the new turbo engines for the first time this year at Misano. A top speed of around 260 km/h can be expected with the four-cylinder turbo engines. The track surface is not one of the smoothest on the calendar, but cars can drive over the relatively shallow kerbs without being put at a disadvantage.

“We’ll be driving in daylight this year and not at night as we did in 2018. That should make it all a bit clearer and much easier,” said Paul looking ahead to the upcoming race weekend. “I can’t wait to find out what effect the increased performance of this year’s new DTM vehicle will have on handling and tyre degradation. Our goal must be to finish in the points again.”

Test outings in competitive conditions: Continue on a positive trend

R-Motorsport have got away to a blistering start over the past weeks and months, getting four new Aston Martin Vantage DTMs prepared to line up in record time. Despite the short lead time before their DTM debut, the team exceeded their own expectations during the first two race weekends and have finished in the Top Ten with at least one driver in every race so far.

“The start of the season has been promising despite some technical teething problems that were bound to crop up,” said Team Principal, Dr Florian Kamelger. “Our drivers have scored points in all four races so far, which is more than we expected.”

“We obviously missed out on valuable development opportunities before the start of the season as a result of the limited amount of time available for building the Aston Martin Vantage DTM which was developed and taken from its inception to the first test drive in just 90 days or so,” added Dr Kamelger. “That’s why race weekends also have to serve as test drives, enabling us to identify technical problems and eliminate them one by one.”

The team will get the next opportunity to get things sorted this weekend at Misano where the four drivers, Jake Dennis, Paul Di Resta, Daniel Juncadella and Ferdinand von Habsburg, will again be keen to continue the positive trend from the first four rounds of the season. “With his fine performance and sixth place at Zolder, Jake Dennis has shown that the Aston Martin Vantage DTM has the potential for future DTM success,” said Dr Kamelger. “We want to continue working on that this weekend during the races at Misano.”

R-Motorsport are also looking forward to entertaining special guest Marlon Roudette during the third DTM race weekend at Misano. The pop singer is from a Caribbean background, knows the team well and is a real fan of the DTM. Marlon will perform on Saturday night at 7 pm on the ITR stage at the Fan Village where DTM fans will be able to enjoy his performance of top hits ‘When the beat drops out’ and ‘Ultra Love’.

“I am really looking forward to my DTM visit at Misano,” said the singer. “I have already watched a few races on site and have always been fascinated by the exciting race action of the series. As being British and a friend of the team R-Motorsport I am especially excited about how the Aston Martin Vantage DTM cars will perform in their debut DTM season at Misano.”

The third DTM race weekend will get under way for this budding team on Friday with two practice sessions at 3.35 and 6.25 pm (both sessions live at ran.de). The first qualifying session on Saturday at 10.30 am will decide the starting grid for the first race. Q2 will be on Sunday at 10.45 am (both sessions live at ran.de). The two races will get under way as usual on Saturday and Sunday at 1.30 pm (live on SAT.1, starting at 1.00 pm).