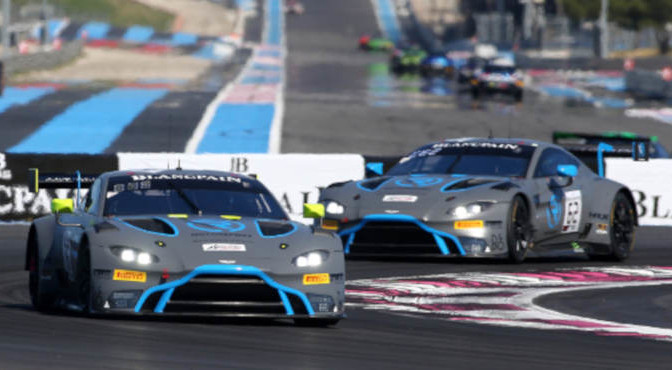 R-Motorsport came away from the Blancpain GT Series Endurance Cup with two strong points-scoring results for a P4 and a P10 finish. On the third race weekend of this year’s championship at Circuit Paul Ricard, the team ranked among the fastest and was on course for a podium appearance until just a few laps from the end.

The six-hour race at the Paul Ricard circuit is considered to be a dress rehearsal for the 24 Hours of Spa. The extended race distance and the late start time provide teams and drivers with an ideal opportunity to prepare for the challenges of the endurance classic in Belgium.

“Even though we didn’t quite make it onto the podium, we can still be satisfied with the result,” says Marvin Kirchhöfer. “We have managed to raise our game over the entire weekend, and we steadily worked our way forward through the field. We have gained important experience that will stand us in good stead at Spa.”

On their way to securing fourth place, Kirchhöfer and co-drivers Jake Dennis and Alex Lynn in the number 76 car had to overcome several impediments. After struggling with setup problems in the free practice sessions, the experienced trio booked 14th on the grid, a solid basis for the race itself in which they made an impressive charge through the field, albeit hampered by an abundance of yellow flags brought out by a series of incidents on the track.

Maxime Martin, Matthieu Vaxiviere and Matt Parry added another Top Ten finish to R Motorsport’s account for the campaign so far. The trio in the sister car, who had been rated as realistic prospects for the win, impressed by virtue of their consistently good pace. However, two drive-through penalties set them back considerably and foiled a potential podium finish.

Vaxiviere, who was driving in his home race at Le Castellet, expressed only partial satisfaction: “A place in the Top Ten is all well and good, but we could have finished much further forward today. We got a great result in qualifying with P6, and we were also going very strong in today’s race, if it hadn’t been for those drive-through penalties.”

Florian Kamelger, Team Principal: “This was an eventful six hours of racing. The performance of Jake, Alex and Marvin in our Aston Martin Vantage gaining 10 places in some exciting wheel-to-wheel fights was outstanding and rewarded with 4th place. Jake even clocked the fastest lap of the race. Unfortunately, two drive-through penalties prevented the car of Matthieu, Matt and Maxime from finishing in the Top Five. After having started the race from sixth on the grid, when Maxime had set the fastest qualifying time of the day, the Belgian eventually finished 10th. A big thank you goes to our team who have worked effectively throughout the entire race with excellent pit stop performances and ideal strategies.”