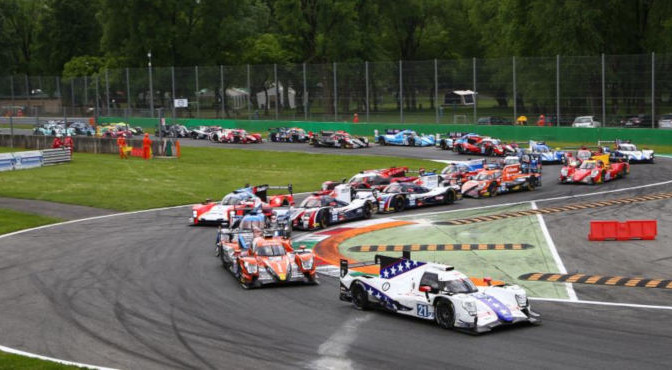 After a thrilling open round at the Circuit Paul Ricard the European Le Mans Series moves to the Temple of Speed for round 2 of the 2019 season. A huge grid of forty two cars will line up for the 4 Hours of Monza and there are many Italian teams and drivers for the Tifosi to support.
LMP2: 19 cars for the Italian battle

In LMP2 there are 19 cars, the largest P2 grid outside of the 24 Hours of Le Mans, with the no21 DragonSpeed Oreca travelling to Italy as championship leaders after Henrik Hedman, James Allen and Ben Hanley took the victory in France. In Monza, Dutchman Renger Van Der Zande will stand in for Hanley in the American team.

Italian team Cetilar R. Villorba Corse will be looking for strong performance as Roberto Lacorte and Giorgio Sernagiotto are joined by Andrea Belicchi in the no47 Dallara. Francesco Dracone and Sergio Campana are the other local representatives in the British team BHK Motorsport’s no35 Oreca.

Reigning champions G-Drive Racing will have an unchanged driver line up in the Aurus 01-Gibson from the first round in Le Castellet with Norman Nato standing in for Jean-Eric Vergne once again. Roman Rusinov will be hoping for a return to the top step of the Monza podium as the Russian enjoyed the view in 2018.

Fourteen cars make up the LMP3 grid in Monza with the Italian outfit Oregon Team putting in a strong performance last time out. Damiano Fioravanti scored the team’s first ELMS pole position in France and the team, with Italian Lorenzo Bontempelli and 16-year-old Lithuanian Gustas Grinbergas, finished just off the podium at the end of the four-hour race.

The 4 Hours of Le Castellet was won by the Ultimate team, a debut class victory for the all French line up of Jean-Baptiste Lahaye, Matthieu Lahaye and François Heriau.

In the LMGTE class it is Ferrari versus Porsche with reigning FIA World Endurance GTE Champion Alessandro Pier Guidi travelling to Monza as the ELMS championship leader alongside teammates Nicklas Nielsen from Denmark and French driver Fabien Lavergne after the trio took the class win in the no51 Luzich Racing Ferrari F488 in France.

Matteo Cairoli took the first pole position of the season in Le Castellet in the no77 Dempsey-Proton Racing Porsche 911, finishing third with Christian Ried and Riccardo Pera. Second place in the 4 Hours of Le Castellet was secured by the all-female crew of Switzerland’s Rahel Frey, Denmark’s Michelle Gatting and Italian Manuela Gostner in the no83 Kessel Racing Ferrari.

2018 4 Hours of Monza LMGTE class winners Duncan Cameron, Matt Griffin and Aaron Scott will be looking to get the Spirit of Race Ferrari into a podium finishing position in Italy. Reigning ELMS LMGTE Champion Giorgio Roda will be racing in his home event alongside Egidio Perfetti and Jorg Bergmeister in the no56 Project 1 Porsche.

2018 Michelin Le Mans Cup drivers champion Sergio Pianezzola will be on double duty in Monza, the Italian competing with fellow champion Giacomo Piccini in Saturday’s two-hour MLMC race and will join Giacomo’s brother Andrea and Claudio Schiavoni in an all Italian driver line up in the no60 Kessel Racing Ferrari F488 GTE Evo.

The no80 Ebimotors Porsche 911 will also feature an all Italian line up, with Fabio Babini, Marco Frezza and Sebastien Fortuna racing for the 2017 Michelin Le Mans Cup championship winning team.