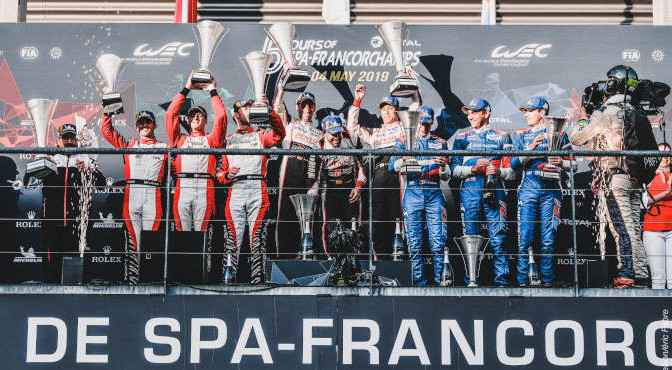 Saturday 01:30 pm, the race started on the Belgian circuit. After the snow in the morning, it was on wet track that the 6 Hours of Spa-Francorchamps started with Thomas Laurent and Neel Jani driving the REBELLION R-13 cars. After 5 minutes on the track, the rain and the snow were back, forcing all the cars to come back to the stand to change tires. The Safety Car came after 25 minutes, driven by the four-time Le Mans winner Yannick Dalmas. He made many SC sessions due to catastrophic weather conditions. During the green flag phases, the car N. 3 was fighting for the podium with the Toyota Hybrid N. 7 (slowed down by an engine failure) and SMP Racing N. 11 and N. 17 cars. Ranked P4 most of the race, a loss of control of the car N. 1 under Safety Car at the entrance of the raidillon relegated the car to fifth position overall shortly before 4:30 race. After a new snowfall, the race committee made the decision to stop the 6 Hours of Spa-Francorchamps 10 minutes from the checkered flag. The car N. 3 finished second while the sister car fifth overall.

REBELLION Racing is back on a podium after a complicated meeting in Sebring last March. The Team worked hard throughout the meeting to allow the cars to perform in such complicated weather conditions. Next and last meeting of the FIA WEC Super Season, the 24 Hours of Le Mans on June 15th and 16th!
“I am very happy to be back on the podium. Since our victory at Silverstone, we had been unlucky. These 6 Hours of Spa were difficult, the weather conditions were a hard test. We did not expect to have to run under the snow. Gustavo and Nathanael did a great job and the technical problem of the Toyota N. 7 allowed us to score big points in the Championship. This result is very positive before the 24 Hours of Le Mans. I will work hard to be ready and achieve the best possible result. It’s a race I love. Driving on this circuit is always an honor and I have incredible memories, including my first participation in 2017. Le Mans is my home race!”

Thomas Laurent, R-13 N. 3 driver
“What a race ! Conditions were incredibly difficult, I think it has snowed maybe 4 times heavily during the race! Brilliant strategies from the team and amazing drives from my team mates! Super happy for this result, all the team deserves it and a podium always gives us an extra motivation and confidence for the big one in few weeks ! Congratulations to all the team for the good work!”

Nathanaël Berthon, R-13 N. 3 driver
“Crazy race day at Spa! Snow, hail, sun… Basically 4 seasons in one day! Ended up P5 after having no radio and thus wrong strategy and we were very unlucky with the Safety Car that made us lose 1 lap! That put us out of contention for the podium! Let‘s hope our luck turns for Le Mans! Congrats to the N. 3 car, that drove a good race!”

Neel Jani, R-13 N. 1 driver
“Tough race for us. More or less every wrong timing they could happen, happened to us somehow and we lost a lot of ground like that so that put us out of the podium race although et had some good speed in the car. But all in all we can be glad we finished the race in those crazy conditions. Hope for more luck in Le Mans!”