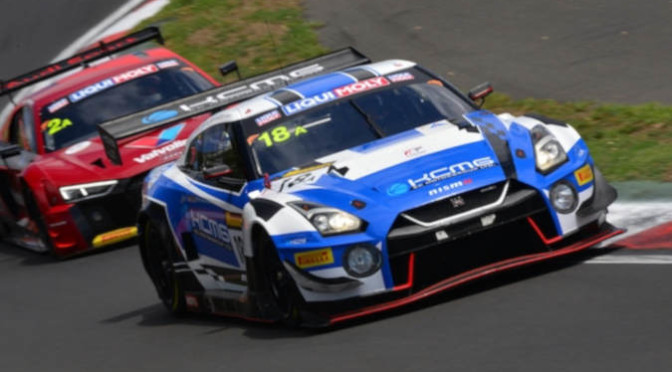 A week ahead of its VLN race debut, KCMG will participate in the official test at the legendary Nurburgring Nordschleife in preparation for its maiden GT3 voyage to the “Green Hell”.

Philipp Wlazik, Alex Buncombe and Christian Menzel will test the Nissan GT-R NISMO GT3 car on Saturday to begin the journey on the road to the iconic Nurburgring 24 Hours race.

Wlazik will use his rich experience of the circuit to help build on KCMG’s knowledge of the Nurburgring, with the team having made a wildcard appearance there in the World Touring Car Championship last year.

Buncombe has become very familiar with the Nissan GT-R NISMO GT3 having driven it since 2012 in FIA GT, Blancpain GT Series and the British GT Championship. In recent years the Brit has become a Blancpain GT regular, winning the Endurance Series outright in 2015.

In addition to tackling the VLN Endurance Championship and the Nurburgring 24 Hours, KCMG will also be continuing its Intercontinental GT Challenge programme, where the Nissan GT-R NISMO GT3 has shown podium potential in the Dubai 24 Hour and the Bathurst 12 Hour.

Alex Buncombe: “I’m delighted to be joining KCMG and to be returning to the Nurburgring. The Nordschleife is one of my favourite tracks in the world with its unique challenges and I’m thoroughly looking forward to working with the whole crew at KCMG and my new team-mates.”

Christian Menzel: “Since 1993 I have been racing on the Nordschleife, everybody thinks that you are cool and relaxed after such a long time, but I am excited every year! The circuit is always a different experience, it never gets boring and you learn something at each race! In 2019, I have a lot to learn: team, car, team-mates, everything is new. It’s always a challenge.”

Philipp Wlazik: “I can’t wait to get back in the Nissan GT-R NISMO GT3 car and to do so at the Nurburgring is incredibly special. I’ve been racing here since very early in my junior racing career and I can’t wait to use that experience with KCMG.”

Alex Fontana: “I’m delighted to join KCMG for VLN, it’s a team that I have been following and I’ve already seen the great performances they had, especially this year in the Intercontinental GT Challenge at Bathurst. The Nissan always seems so strong, especially in the experiences I had in the Blancpain GT Series, so to be back in this car in VLN is something great because the Nordschleife is the most challenging in the world.”

Joao Paulo de Oliveira: “It’s an honour for me to join KCMG for the Nurburgring 24 Hours. I’m looking forward to working with the team. The event is one of the hardest endurance races out there but whatever I do in racing I want to win. I saw good potential here with KCMG so I’m looking forward to having some good battles, and to have a shot at winning the big race.”

Paul Ip, KCMG Founder: “I’m very pleased to have Alex Fontana, Alex Buncombe and Christian Menzel as our drivers for our second Nissan GT-R NISMO GT3 car. Having such a high calibre line-up will only improve our chances for our inaugural Nurburgring 24 Hours, with of course the help of Philipp, Alex [Buncombe] and Christian at the upcoming test.”

KC Motorgroup Ltd (KCMG) is an international motorsport services group established in 2007 by Paul Ip. The group, with its headquarters located in Hong Kong, has operations reaching across the Asia Pacific region. KCMG operates closely with many partner companies and racing organisations around the world to provide unrivalled motorsport services, equipment, team management and quality distribution in the automotive industry. For more information on all of the team’s activities please visit www.kcmg.com.hk or email info@kcmg.com.hk.