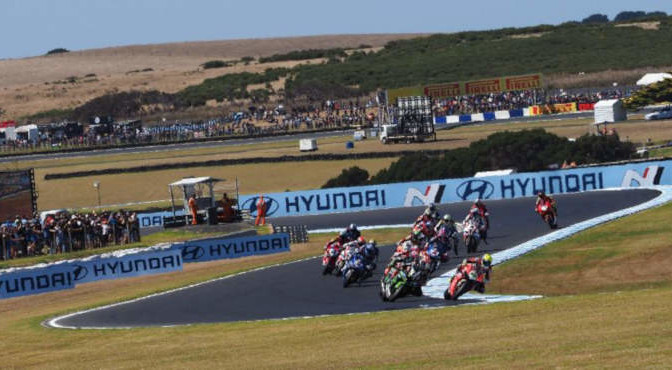 The final race of the Yamaha Finance Australian Round in the opening meeting of the 2019 MOTUL FIM Superbike World Championship went the way of Alvaro Bautista (ARUBA.IT Racing – Ducati), who completed a dream WorldSBK debut. The Spaniard becomes the first rider to win both WorldSBK races on his debut weekend since John Kocinski – also for Ducati – at Misano in 1996.

At Turn 1 on lap two, Eugene Laverty (Team Goeleven) made a brief appearance into sixth, passing Melandri, only for the Italian to repay the compliment to his former WorldSBK teammate. Back in the fight for second position, Haslam began to pull away from Rea, the reigning Champion not having things his own way.

Marco Melandri got his way ahead of van der Mark and immediately set about closing down the KRT pairing of Haslam and Rea. Further up the road, Alvaro Bautista was building his own gap, setting the fastest lap to confirm his relentless pace. The gap between the two Kawasakis was now at 0.5s, with Haslam seemingly able to put distance between Rea. Behind Melandri and van der Mark, Alex Lowes (Pata Yamaha WorldSBK Team) was back into sixth.

Further down the order, Chaz Davies (ARUBA.IT Racing – Ducati) was making good progress from 16th on the grid and was now ninth, almost passing Laverty at Turn 10 but deciding to wait for another time.

Whilst throughout most of the weekend the rivalry between Bautista and Rea was headlining, Haslam and Rea started to get close on circuit too. From lap seven, the reigning World Champ started to close his new teammate down and with just eight laps to go, the Northern Irishman made his move at Turn 1, only for Haslam to take him back at Turn 4 with a traditional block pass. This started a succession of nine passes between the pair. Haslam put an audacious Jonathan Rea-style pass on the four-time champion at Turn 1, with Rea responding immediately almost every time.

Behind the squabbling Kawasaki riders, the Yamaha riders of Melandri and van der Mark decided to have their own fight, passing and re-passing, hindering their chances of taking the fight to Rea and Haslam, less than half-a-second up the road at times. Van der Mark was up to fourth at Turn 4 with four laps to go, although Melandri got back ahead at Turn 10.

However, despite all of the fighting with the Kawasaki Racing Team and Yamaha riders, Alvaro Bautista was oblivious to the squabbling left in his wake. The 2006 World Champion crossed the line to become a WorldSBK winner for a second time, with the Tissot Superpole Race win also going to the Spanish sensation.

Rea eventually took second place ahead of Haslam, whilst van der Mark finished fourth ahead of teammate Alex Lowes, who put in a stunning late charge to demote Marco Melandri to sixth. Chaz Davies finished a fine seventh place and ended a poor weekend with his best result, with reigning WorldSSP Champion Sandro Cortese completing the top eight once more. Eugene Laverty took ninth place and his joint-best finish of the weekend, whilst rounding out the top ten was Leon Camier.

P1 – Alvaro Bautista (Aruba.it Racing – Ducati)
“Before coming to Australia, I couldn’t expect a weekend like this. During the two-day of official test, we worked hard, and we arrived at the race weekend ready for the battle. This morning during the Tissot Superpole Race, Rea and I fought hard, and I really enjoyed it, but in the afternoon track conditions were a little bit worse. My pace was still good, but after the 10-lap race, I expected Jonny to stay with me in Race Two. I pushed hard from the beginning and the gap increased and I was able to win again. I want to thank Ducati and all the guys for their incredible job! It has been an amazing weekend for us”.

P2 – Jonathan Rea (Kawasaki Racing Team WorldSBK)
“I am happy about the race weekend. Phillip Island is not one of the stronger tracks for me and my bike but to come away with a lap record, a pole position and two second places, I couldn’t have asked for more. My congratulation goes to Alvaro. It takes a lot of work to come here as a rookie and win three races in a row, so a big congrats to him”.

P3 – Leon Haslam (Kawasaki Racing Team WorldSBK)
“With this podium, it was able to make up after the silly crash I had yesterday. It was a good Race Two, with a lot of passing and I had so much fun. With two laps left, I thought it was made and that I was going to finish in second, but Jonathan is not a four-time world champion for no reason and he beat me. Third on the podium is a good result and it’s perfect for the team as we finished second and third. Now we can move on to Thailand and try to progress”.