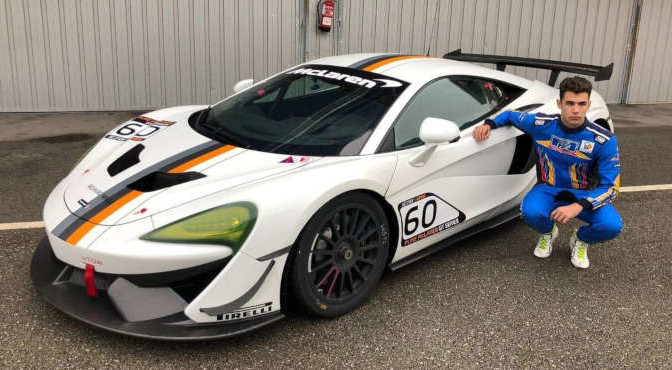 Guillem Pujeu has reached an agreement with Teo Martín Motorsport to contest the GT Open Cup driving a McLaren 570S GT4, which will mean his debut in GT racing. The young ace will take a leap into the unknown but, at the same time, it will open up the future to many opportunities. Teo Martín Motorsport will be part of the McLaren family and their Driver Development Program, which is designed to develop future talents of its GT programme.

Pujeu, who was Formula 4 Spain Vice-Champion with six wins to his name last year, will make his official debut behind the wheel of the McLaren-built GT4 contender later this week during the GT Open Cup’s Winter Series in Le Castellet. Pujeu will have the chance to participate in the two-day test in order to get plenty of laps under his belt with the McLaren machinery.

“They were two fantastic seasons with FA Racing in the Formula 4-based series. Both years gave me valuable experience for my future. I learned tons about race car driving. Of course, we also experienced some downs but we had much more ups by far. We remained in title contention until the very last moment last year. Besides, we managed to fight for wins almost every weekend in both seasons. We worked hard to get these results and it has now led to get in touch with Teo Martín Motorsport” says Pujeu.

The Girona native adds: “Teo Martín is a top team, which has notched up a long list of GT titles and race wins. The new collaboration with McLaren Customer Racing was an exceptional new opportunity arising for us. I believe the future lies in the FIA WEC and other endurance championships becoming a factory driver. I make this career change because I think it’s the best for me. I’m looking forward to working with Teo Martín Motorsport and McLaren in order to lay foundations for a great season together. My goal is to score as many podiums as possible right across Europe under the banner of Teo Martín Motorsport and McLaren. Let’s start!”