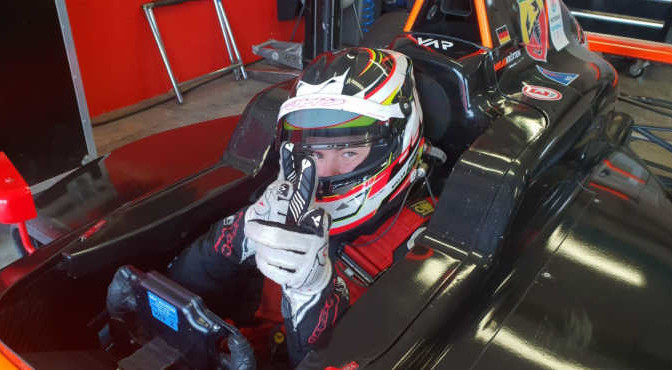 New year, new team, new team colours. After his first year in single-seater racing, 16-year-old German driver Niklas Krütten will swap his pink racing overalls for the orange-black ones of Van Amersfoort Racing in 2019. He will drive for the Dutch outfit in the ADAC Formula 4 and its Italian equivalent, the Formula 4 Italian Championship, during 2019.

After achieving success in karting, he moved this year to compete in formula motor racing. His performance in the ADAC Formula 4 was impressive right from the start of the season. The highlight of his first year in open-wheel racing was, no doubt, his victory at the Nürburgring. Overall, Krütten finished three times in the Top Three and was the only rookie to do so. Six wins in the Rookie stakes round off his strong debut this season, making him the best newcomer in the overall standings of the 2018 ADAC Formula 4. He also showed impressive form in the Italian Formula 4 (taking third place in the Rookie classification) and in the Formula 4 UAE (race win). Krütten not only did well by showing strong pace on the track, his former team have said that he has also demonstrated a steep learning curve, shown foresight and very high degree of an ability to learn quickly.

The fact that he is moving to Van Amersfoort Racing in his second year is not surprising, as the Dutch crew are one of the top three teams for bringing on young talent. Formula 1 drivers such as Max Verstappen and his father Jos and Charles Leclerc, as well as DTM drivers such as Lucas Auer have driven for the prestigious, top Dutch racing team in the past. During the period 2016 to 2018, Van Amersfoort Racing booked second place in the ADAC Formula 4 team classification and, became series champions with Joey Mawson in 2016.

Krütten has already undertaken his first test runs for Van Amersfoort Racing. Preparations by the team and its drivers are proceeding apace at a very professional level. At the same time, the family environment in the team constitutes the ideal basis for another, even more successful season for him in Formula 4.

The first joint race weekend for Krütten and Van Amersfoort Racing will be the season opener of the ADAC Formula 4 in Oschersleben (26th – 28th April). Seven meetings with three races per weekend are on the schedule to include the season highlight at the Hockenheimring as part of Formula 1. Sport1 will broadcast all of the ADAC Formula 4 races which will also be available as live stream at Sport1.de. Seven meetings, each featuring three races, are also planned in the Formula 4 Italian Championship, which will be broadcast as live stream on Facebook.

Niklas Krütten: “My second year in Formula 4 is fast approaching, and to contest the new season with Van Amersfoort Racing, one of the best teams in junior motorsport, will be an honour and a privilege. We’ve already had a few test drives, and I’ve been able to get a pretty good idea of what we can do in 2019. Having appeared on the podium several times last season, finishes in the Top Three and race victories are realistic targets. I would like at this point to thank Peter Mücke, Frank Lucke and everyone at BWT Mücke Motorsport, who helped me enormously in my Formula 4 rookie year. We had a fantastic time together. I would also like to thank my new team boss, Frits van Amersfoort and Rob Niessink for showing their confidence in me. 2019 is going to be a great year!”

Rob Niessink, CEO Van Amersfoort Racing: “During testing, which is already on-going, Niklas shows good progress each time we hit the track. He has an impressive drive to perform, making him a pleasure to work with. Competing in two championships simultaneously has quite an impact on both driver and team, but we have great confidence and are very much looking forward to a successful season.”