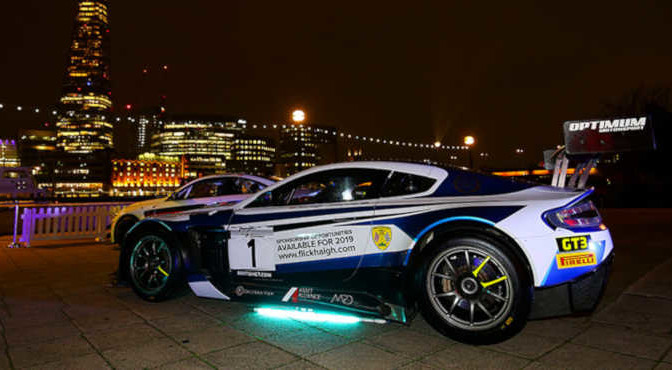 British GT’s 2018 champions, as well as those from every series organised by SRO Motorsports Group, gathered at Old Billingsgate in London on Saturday evening (November 24) for the organisation’s annual end-of-season prize giving ceremony.

Optimum Motorsport duo Flick Haigh and Jonny Adam were on hand to collect the British GT3 Drivers’ Championship trophies following their history-making campaign in the senior class, while Derek Johnston accepted the Teams’ title award on behalf of TF Sport.

There was also no shortage of prizes for Century Motorsport and Jack Mitchell who collectively cleaned up the GT4 Teams’, Drivers’ and Silver Cup championships. They were joined on stage by Pro/Am class winners Nick Jones and Scott Malvern (Team Parker Racing).

Meanwhile, Haigh was presented with a limited edition and personally engraved Blancpain 8885S chronograph timepiece after being named Blancpain Driver of the Year.

But the evening was also a chance for British GT to acknowledge two special achievements that might have gone unnoticed during the season.

The Allan Simonsen Award has become a highly prized accolade within the championship. It is traditionally won by a driver with the same speed and spirit that epitomised Simonsen, who tragically lost his life at the Le Mans 24 Hours in 2013. This year the panel selected TF Sport’s Nicki Thiim as the sixth recipient of the award.

Whether it be on Instagram, Youtube or in the paddock, Thiim’s infectious personality is only matched by his hirsute features. However, the Dane also proved his credentials behind the wheel with two victories, a virtuoso pole lap at Snetterton and incredible pursuit of Phil Keen at Donington. That ultimately resulted in he and Mark Farmer finishing third in the Drivers’ standings, while TF Sport claimed the Teams’ crown.

However, there is also a personal connection between Simonsen and Thiim who completed 2013’s FIA WEC campaign aboard the same Young Driver AMR Aston Martin previously driven by his fellow countryman. Thiim has remained part of the manufacturer’s factory line-up ever since.

Elsewhere, there was no denying the winner of 2018’s Professional Motorsport World Expo Team of the Year Award: Tolman Motorsport. Not only did the outfit finish second in the GT4 Teams’ standings but it also won the individual weekend award twice in as many events after working around the clock at Spa and Donington.