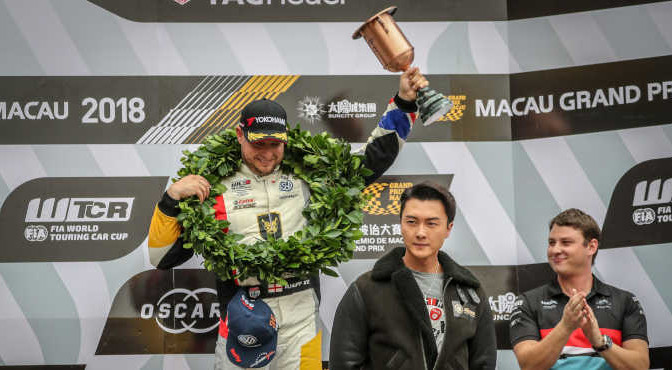 This weekend in Macau the curtain came down on the 2018 WTCR (the FIA World Touring Car Cup) season. The two Sébastien Loeb Racing drivers, Rob Huff and Mehdi Bennani, were present at the famous but unpredictable Guia circuit hosting the FIA Touring Car World Cup.

Rob Huff, known as the King of Macau because of his nine victories on the Guia circuit, fired a warning shot across the bows of his rivals in free practice and qualifying. In the first free session he was third fastest and he dominated most of the second in which he topped the time sheets. Mehdi Bennani, also one of the few winners of an FIA WTCC race in Macau (2017), finished the opening free session in eighth place and improved in the second setting the fifth-quickest time.

Huff was in stunning form and set the fastest lap in the last sector in the first qualifying session to clinch the DHL Pole position for race 1. He then dominated Q2 despite grazing his left-hand rear mirror against a wall. Bennani put on a good performance in Q1 setting the third-fastest time in his Volkswagen Golf GTI TCR. The Moroccan driver was involved in an accident in Q2 and had to start races 2 and 3 in 11th place.

Macau is reckoned to be one of the most difficult circuits in the world and as usual there was a fair amount of bent bodywork! Bennani was caught up in a collision which he couldn’t avoid in race 1 and finally saw the flag in 15th spot. Huff, who started on pole, came home in an encouraging third place resisting the pressure of his rivals after a race full of twists including a blocked track on two occasions, a red flag and some pretty spectacular contacts between cars!

On lap 1 of the second race a collision between two cars triggered a chain reaction which impacted Huff who was forced to retire. Bennani called on all his race craft to fight his way up to tenth despite a fair amount of pushing and shoving along the way!

In the final race of the season Huff started from pole, slipped back to second and was involved in a tense battle as he fought off his pursuers. Bennani, who started in 11th spot on the grid, was the unwitting victim of the domino effect of a collision between two rivals and was punted into the wall bringing his race to a brutal halt after only a few metres.

Rob won the Tag Heuer Best Lap Trophy by setting the fastest lap in the first two races with a time of 2m 31.038s in race 1.

“We’ve finished this championship in a blaze of glory! I’m very satisfied as I felt really confident in the car thanks to a perfect setup found by the whole team. My sincerest thanks go to them all as in both the qualifying sessions and the race the car was really incredible to drive. So we’ve finished the year on a high note and we’ve progressed at incredible speed with a capital S! I’m very happy to close the season on this note. I’ve had a fantastic year and learned a lot in the Sébastien Loeb Racing team and at the wheel of the Volkswagen Golf GTI TCR. I can’t wait to begin the new season – roll on next year!” Rob Huff

“We’re finishing the season on a very positive note as we were well placed compared to our top speed. I think we had a really good car to fight at the front and I’d like to thank the whole team for all their hard work this year. Rob was on another planet in qualifying and I was on the pace. Unfortunately, I was caught up in two crashes and had to retire each time. On this type of circuit the tiniest collision can have dramatic consequences and cause serious damage to the car so I preferred not to take risks. Even so, I managed to clinch a top-10 finish. Overall, I had some bad luck during the season although I’m convinced that success will smile on me in 2019.”

“It was a positive weekend, which went off well as a whole, and the Volkswagen Golf GTI TCR put on a great performance. Rob who knows the circuit like the back of his hand really amazed us in qualifying with dazzling times. Mehdi was pretty dextrous and he too had a good weekend’s racing. We met with a few problems at the starts and sometimes we lacked top speed compared to our rivals, but we’ll take away very positive memories of the weekend. We’ve ended our season in very encouraging conditions and it gives us big hopes for 2019.” Jean Philippe Nicolao.

After the final round Rob Huff finished eight with 242 points and Mehdi Bennani twelfth with 155 points in the championship’s overall general classification. Sébastien Loeb Racing ended up fourth with 412 points.