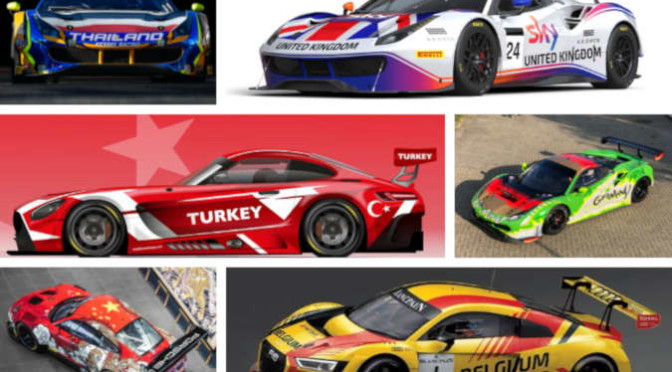 Staged at the Bahrain International Circuit, the two-day event will feature contemporary machinery thanks to the FIA GT Nations Cup and SRO GT4 International Cup, while the stars of yesteryear will hit the track in the Bahrain Classic Challenge.

SRO Motorsports Group will promote and organise the event, with the FIA adding its expertise for the premier FIA GT Nations Cup contest. This will feature two-man crews representing their home countries in a bid for international glory, with many coming from the Blancpain GT Series and other SRO-organised categories.

This includes the most decorated squad in Blancpain GT Series competition, Belgian Audi Club Team WRT, which will field an Audi R8 LMS for Belgium’s Nations Cup effort. Acknowledged as one of the finest crews in international GT racing, WRT will run Mike Den Tandt and Charles Weerts at the season-ending event.

Team Italy will also call upon a multiple Blancpain GT Series title-winner in AF Corse, which will run a Ferrari 488 GT3 for Piergiuseppe Perazzini and Matteo Cressoni. Both drivers have experience of SRO series: Perazzini has competed in Blancpain GT Sports Club, while Cressoni contested this year’s Total 24 Hours of Spa with the AF Corse-run T2 Motorsport squad.

Amato Ferrari’s well-respected team will run a total of three cars in Bahrain, with the United Kingdom and Japan also relying on the Italian outfit. Team UK will call upon the driving talent of Chris Buncombe, who clinched this year’s Endurance Cup drivers’ title in the Pro-Am class.

For the Japanese effort, Blancpain GT Series Asia racers Ken Seto and Tamotsu Kondo will team up for an assault on the Nations Cup. They have already worked together in 2018, competing at the Fuji round of the Asian championship.

There will be plenty of familiarity among the Turkish effort as well, with Blancpain GT Series regulars Salih Yoluc and Ram Racing resuming their 2018 Endurance Cup alliance. Yoluc was part of the Ram effort that secured Pro-Am class honours at Silverstone and will once again be at the wheel of a Mercedes-AMG GT3 in Bahrain.

The Kessel TP12 squad will reunite with Piti Bhirombhakdi to run the Thai effort. Having come close to capturing the Blancpain GT Series Sprint Cup title in the Pro-Am class this term, Bhirombhakdi will be keen to secure top honours in Bahrain. His teammate in the #39 Ferrari 488 GT3 will be Pasin Lathouras, who comes with several Endurance Cup starts to his name, including overall podiums and pole positions.

Among the most impressive line-ups heading to Bahrain is the France effort, which will be fielded by reigning Blancpain GT Series overall champion AKKA ASP Team. Jerome Policand’s squad will field long-time driver Jean-Luc Beaubelique, who has raced extensively in the Blancpain GT Series since its formation in 2011. His teammate in the #89 Mercedes-AMG GT3 will be Jim Pla, with whom Beaubelique finished as runner-up in this season’s FFSA GT4 France championship.

There is considerable strength to the German effort as well, with two Blancpain GT Series title winners in Alexander Mattschull and Nico Bastian. The former was Pro-Am drivers’ champion in 2017, while his younger teammate clinched the Silver Cup drivers’ title this term. They will take the controls of a Ferrari 488 GT3 run by multiple champions Rinaldi Racing, completing a formidable line-up.

Rinaldi will also field the Russian entry, with regular driver Rinat Salikhov looking to follow up his class win at this year’s Total 24 Hours of Spa with a Bahrain victory. He will pair with youngster Denis Bulatov, who took a hat trick of Silver Cup wins during 2018 as part of AKKA ASP’s crew.

The Swedish flag is being flown by Blancpain GT Series regular Garage 59, which will field 2018 Endurance Cup competitor Alexander West in Bahrain. The #188 McLaren 650S GT3 took a brace of Am Cup wins this term and will retain the same race number as it guns for Nations Cup glory.

Fellow Am Cup squad Herberth Motorsport will field a brace of entries in Bahrain. The German outfit will bring Porsche 911 GT3 R machinery for the representatives of China and Australia, with the Chinese effort featuring Blancpain GT Series Asia racers Li Chao and Ye Hongli.

Argentine hopes will rest with Jose Manuel Balbiani, who raced in the Blancpain GT Series during 2017, and Ezequiel Perez Companc. The latter spent 2018 competing extensively for the crack Grasser Racing outfit, scoring a pair of Sprint Cup podiums along the way.

Indeed, of the 18 crews set to contest the FIA GT Nations Cup a total of 16 have recent knowledge of SRO-organised series across the globe. The standard of teams and drivers confirmed for the inaugural event is impressive and promises to deliver fitting conclusion to the 2018 campaign.

There will be plenty more on-track action at the Bahrain International Circuit, with the FIA GT Nations Cup joined on the bill by the inaugural GT4 International Cup and the Bahrain Classic Challenge. Meanwhile, adrenaline junkies will have plenty to feast their eyes on thanks to the Extreme Stunt Show and the record-breaking Stannage International Stunt Team.

Not all of the entertainment comes with an engine, however. Music fans will be able to enjoy the Spanish-South American fusion of The Due and the unique acoustic guitar work of Adam Kadabra. With juggling, hula hoops and acrobatics also part of the line-up, the Bapco Bahrain GT Festival will provide something suited to every taste.