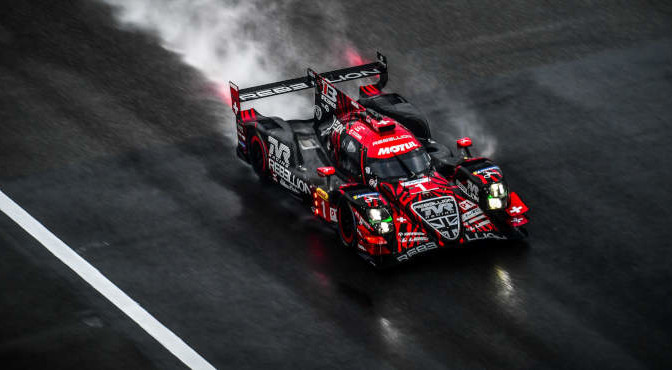 The fifth meeting of the FIA ??Super Season WEC took place this weekend in Shanghai. For this last race of the year, Team REBELLION Racing was determined to make an impression. The three free practice sessions was the drivers’ opportunity to record as much information as possible for Sunday’s race. In the last session, both REBELLION R-13s achieved the two best times on the board. The highly competitive qualifying session in this LMP1 class, where the gaps have tightened thanks to the latest EoT review, allowed the R-13s to get the third and fifth fastest times of the session under bright sunshine (the meeting’s last one).

Sunday, 11:00 am in Shanghai, the race started in heavy rain. The Safety Car started the race with the other cars. After 15 minutes on the track, Thomas Laurent suffered from the bad weather and the car came out of the track, forcing the French driver to return to the stand for repairs. He left the stands in 35th position. Three minutes later, the red flag was agitated: the cars had to stop on the track. The race resumed for a few laps only. After 35 minutes of racing and yellow flag intermissions due to the many laps, the red flag was back at 1:40 of racing. 2:10 into the race, the drivers returned to driving under safety car. Bruno Senna replaced Neel Jani after 2:35 on the track. Car N.1 was the first to change drivers and bet on a new stop that would place them at the head of the race. And it was a winning bet, since Bruno Senna freshly entered the track, leading a few minutes before being caught by the Toyota Hybrid Alonso and SMP Racing Jenson Button. Meanwile, car N.3 continued a difficult rise among the GTE then the LMP2. Thomas Laurent, Mathias Beche and Gustavo Menezes had completed a very high level of performance four hours the race and caught up with the leading cars. 25 minutes before the finish, a safety car closed the gap with the third. The R-13 N. 1 was only 2 seconds from the SMP Racing N. 11. The race resumed for three laps but not under optimal conditions, the R-13 N.1 had passed the finish line in fourth place overall, followed by sister car N.3.

The year 2018 ends with a little bit of frustration because of the results obtained in Shanghai, but we must acknowledge the excellent performance and progress achieved since the start of this Super Season FIA WEC for both REBELLION Racing teams. Despite missing the podium by not much, the race was of high intensity. Next appointment is on March 15, 2019 for the 1000 miles of Sebring!

Calim Bouhadra, Vice President REBELLION
“We are extremely disappointed with our weekend, we have not been able to live up to the event and the new EoT. This one was much more fair and could have allowed us, private teams, to offer a more competitive race! I take this opportunity to thank Gérard Neveu for this more equitable change! In addition, the rain and the multitude of safety cars also did work in our favor for a better result. We must put the craft back on the book and work hard to get back to the Sebring race!”

Bruno Senna, N.1 driver
“It was a tough day, after a very encouraging performance in qualifying. The very wet conditions affected our car a lot more than the others and our pace was only competitive at some stages of the race. Safety cars really damaged our strategy as well, so we need to learn lessons from today and put it behind us. Let’s focus on big improvements coming to Sebring!”

Neel JANI, N.1 driver
“Tough race in the wet weather and we were basically on survival mode in the beginning, with lot of aquaplaning! It was one of the most difficult races I’ve done in WEC, the weather was making it very difficult and just staying on the track was sometimes hard! We’ve had some high points today but we need to work hard during the Christmas period to improve in every area of our package as competition is getting tougher each weekend!”

André Lotterer, driver N.1
“Shanghai has been a difficult race. We had a good qualifying session where we could have had a better lap and get between the two Hybrids. This is still a good performance and we have made great progress. The race was tainted with bad weather and safety cars, including one that made us lose a ride. Despite this, we came back very strong on the SMP Racing. We were right behind them but a new safety car and the pace was broken at the end of the race. When the flag went green for the last three laps, I did not have the tires in good shape so we could not continue the challenge to get back this third place. A little disappointing but we learned a lot and despite this difficult race we managed to finish without a hitch.”

Mathias Beche, N.3 driver
“A new frustrating weekend for our crew. We had the performance for the podium this weekend. We only have two races left before the next 24 Hours of Le Mans and we must continue to work hard in all areas and raise our level. During the race and during the qualifications, our performance as never been this close to the Toyotas’, which is encouraging. Thanks to the mechanics for allowing us to get back on track quickly after the incident and score the points that got us in 5th place.”