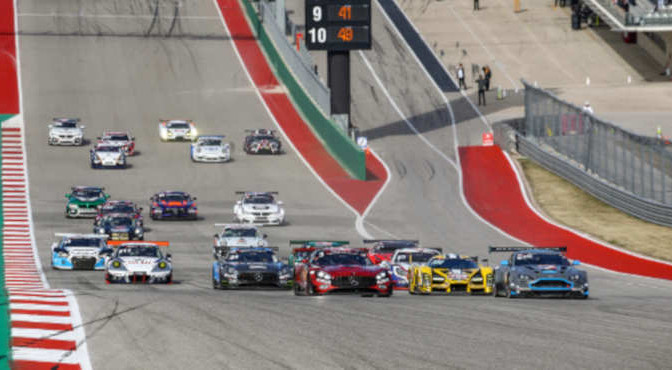 Austin, USA: The grand finale of the 2018 Creventic 24h Series took place at the Circuit of the Americas over the weekend. Making the long trip to the other side of the Big Pond was Swiss outfit R-Motorsport led by team owners Dr Florian Kamelger and Dr Andreas Baenziger as well as German PRO driver Marvin Kirchhöfer and Australia’s Peter Leemhuis. Lining up on the grid for the closing fixture of the current season were 34 cars from the GT and touring car classes.

At the end of an action-packed 24 hours, the number 620 Aston Martin Vantage V12 GT3 finished 14th in the overall standings and fourth in the A6-AM class. It was a result that failed to reflect the team’s true potential, as was apparent from Kirchhöfer’s fastest race laps in both legs of the race.

Marvin Kirchhöfer drove the first stint for R-Motorsport in the 24-hour race at the Circuit of the Americas. The PRO class driver had booked pole position for the team’s Aston Martin Vantage V12 GT3 in qualifying. Pole-sitter Kirchhöfer kept his nose in front over the long start-finish straight and entered the first corner as leader. In the early stages of the race, the R-Motorsport man opened up a gap ahead of Yelmer Buurman in the Mercedes-AMG GT3 entered by Black Falcon. For the first eleven laps, the distance between the two drivers was around the one-second mark.

But after 14 laps, it became apparent that the tyres on the Aston Martin Vantage V12 GT3 were degrading faster than those of the opposition, and Kirchhöfer was able to offer little resistance when Luca Stolz in the second Black Falcon Mercedes mounted an overtaking move. The German then remained within striking distance of the leader before pitting on Lap 27 for the first time. This turned out to be unfortunate timing for R-Motorsport as, shortly after Kirchhöfer returned to the track, the stewards called a Code 60, which the opposition gleefully seized upon to make their own first pit stops. The time advantage gained by the other teams was significant, and R-Motorsport dropped back to twelfth place.

By the end of his first stint, which had lasted just under two hours, Kirchhöfer regained some of the lost places and handed the Aston Martin Vantage V12 GT3 over to Andreas Baenziger. The first of the three amateur drivers kept the car in the Top Ten during his stint. The next driver change followed after 79 laps, with team principal Florian Kamelger taking over in the cockpit. The South Tyrolean fought his way up to eighth place, but the deficit on the leading group was already large.

After Kamelger, it was the turn of the fourth member of the R-Motorsport squad, Peter Leemhuis. At 5pm local time, the Australian made a mistake in Turn 14, spinning off the track and hitting a barrier. By the time he got back to the pits, ten minutes had been lost. The subsequent repairs took another 35 minutes.

Unsurprisingly, the gap to the front-runners had widened considerably, and for Kirchhöfer in his second stint, it was all about cutting the team’s losses. The Aston Martin Vantage V12 GT3 ran smoothly after the stop, and the German was immediately able to match the race leaders in terms of lap times. At the end of the first 12,5-hour leg, R-Motorsport were 17th in the general classification and fifth in the A6-AM class. PRO driver Kirchhöfer set the fastest lap of the first leg of the race with a time of 2:07.862 minutes.

Rain in Texas: The second leg of the 24-hour race at the Circuit of the Americas in Austin began in wet conditions. Once again, it was Kirchhöfer who took the wheel of the R-Motorsport Aston Martin Vantage V12 GT3 for the first stint. The German made a good start under difficult conditions. In the course of his stint, Kirchhöfer was clocking lap times that were in no way inferior to those of the race leaders. And as on the previous day, the 24-year-old set the fastest lap of the race. With a time of 2:06.971 minutes, he was the only contestant in the field to break through the 2:07-minute mark.

The three amateurs in the squad also managed to put in consistent performances on Day 2. Despite a lengthy pit stop for repairs to the car, the quartet ably assisted by their crew achieved a creditable P14 finish which was enough to see them take fourth place in the A6-AM class.

Dr Florian Kamelger, Team Principal and driver: “That was a difficult race for our hard-working team – it had its highs and its lows. After topping the timesheets so impressively in qualifying, Marvin went on to demonstrate our competitiveness by leading the field in the opening stages of the first leg. He also clocked the fastest lap of the whole event. Unfortunately, a lengthy interruption for a repair made necessary by an off into a barrier set us back considerably, although our drivers subsequently posted consistently good lap times, including in the second leg of the race. But ultimately, we could not finish any higher than 14th.”