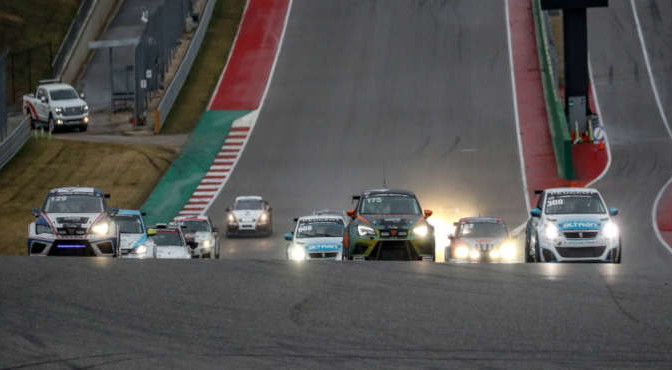 Scott Heckert led the field across the finishing line to complete 603 laps of the 5.5km Circuit of The Americas, and finished ahead of the Herberth Motorsport Porsche 911 GT3 R (#911, Daniel Allemann / Ralf Bohn / Robert Renauer / Alfred Renauer), which led almost half of the re-started race distance. The PROsport Performance Mercedes was the highest finishing A6-Am entry, completed a strong run by finishing in the overall top three, and leaves Texas with the Overall Teams and the A6-class Championship of the Continents. Ralf Bohn and Robert Renauer meanwhile walk away with the Overall Drivers’ GT crown.

“This Black Falcon team did an awesome job and the Mercedes-AMG was fantastic all day long,” Mike Skeen explained to radiolemans.com’s Joe Bradley. “We knew we were in a good position last night when we finished part one and we just had to execute today. We knew we had good pace compared with the Porsche, we knew they had penalties coming, so we just had to stick to the plan and go at it!”

Antti Buri led the TCE field over the line to complete 550 laps of the 5.5km Circuit of the Americas and take the car’s second win of the season. The #129 CUPRA’s fight for victory seemed to be over when its suspension collapsed on-track, losing two laps in the process. The Finnish team was able to recover though and joust with the ‘sister’ NKPP Racing CUPRA throughout the closing stages.

“It’s amazing,” an overjoyed Bas Koeten explained to radiolemans.com’s Bruce Jones. “It was so close when they were fighting each other, but… it’s just so incredible. I have no words for how happy I am!”

The 24H SERIES powered by Hankook will return in 2019 and kicks off the New Year with the brand new Hankook 6H DUBAI on 5-6 January for GT and PROTO cars. The annual Hankook 24H DUBAI will return on 10-11-12 January and will be the first round of the 2019 Championship of the Continents. The 2019 European Championship will get underway two months later on 29-30 March. As was the case this year, the 24H SERIES powered by Hankook season will conclude at the Circuit of the Americas in Austin, Texas, on 15-16-17 November 2019. Further information can be found at www.24hseries.com.