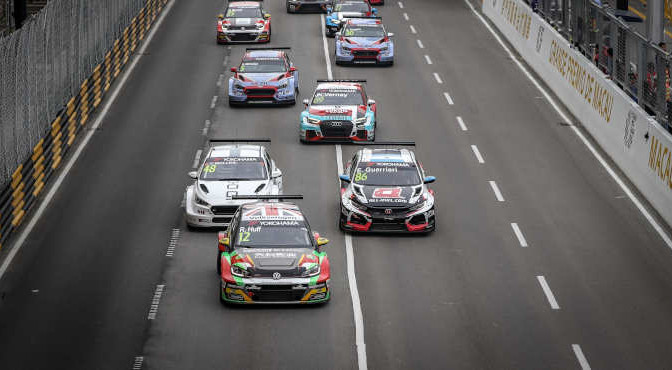 Jean-Karl Vernay scored his fourth victory of the WTCR – FIA World Touring Car Cup presented by OSCARO season after defeating Yvan Muller and Rob Huff in Race 1 at WTCR Race of Macau this afternoon, a result that means Muller is now 33 points Gabriele Tarquini in the title battle.

The Audi Sport Leopard Lukoil Team driver got the better of Muller following a safety car restart to take the lead, having started fourth on the grid at the famous 6.12-kilometre street circuit. He then soaked up pressure from his fellow Frenchman to secure the win, as Huff completed the podium having started from the DHL Pole Position.

WTCR OSCARO points leader Tarquini was fourth for BRC Racing Team after starting seventh. The fight for the inaugural title now comes down to a two-way duel between former world champions Tarquini and Muller in Races 2 and 3 on Sunday.

“It was a good race and I’m really happy for our sponsors and the team,” said Vernay. “We worked hard to prepare, and the plan was to make a good start, then hope for a safety car. I had a lot of pressure from Yvan and Rob, whose cars were faster. Now I’m already focused on the races tomorrow, because the job is not finished. But we won today!”

YMR driver Muller made a great start as Sébastien Loeb Racing’s Huff lost out from his first-place start. The white Hyundai won the drag down to Lisboa to lead as Vernay followed him through and further demoted Huff, while Tarquini made great progress to rise from seventh to fourth.

But behind them there was contact at Lisboa, as Audi Sport Team Comtoyou’s Frédéric Vervisch and Sébastien Loeb Racing’s Mehdi Bennani made contact, with Kevin Ceccon’s Team Mulsanne Alfa Romeo Giulietta TCR also getting caught up in the incident.

Ceccon would retire with a puncture, but Vervisch and Bennani would continue. In a separate incident, Denis Dupont’s Comtoyou Audi was forced out after contact with Aurélien Comte’s PEUGEOT 308TCR, and the safety car was called upon to pause the action.

At the restart on lap three, Vernay got a fantastic run through Mandarin to take the lead from Muller, as Huff and Tarquini made it a four-way train at the front. Behind them, there was further contact at Lisboa between Thed Björk and John Filippi, which left the Team OSCARO by Campos Racing Cupra TCR with damage. Björk continued in P11.
Then on lap five, the race was stopped after Gordon Shedden’s Audi Sport Leopard Lukoil Team entry, which had started on the back row after a 10-place grid penalty for an infringement in qualifying, nosed hard into a barrier at Police and blocked the track.

The race restarted behind the safety car and when the green flags waved on lap seven, Vernay had four laps to hold off Muller and Huff, as Tarquini dropped off the trio to secure a safe fourth. But neither Muller nor Huff could get close enough on the fastest part of the circuit to make a move for the lead, and Vernay prevailed.

BRC Racing Team’s Norbert Michelisz finished behind his team-mate Tarquini to take fifth, ahead of ALL-INKL.COM Münnich Motorsport’s Esteban Guerrieri, whose Honda Civic Type R TCR lost out at the start from its front-row grid slot. The Argentinian had to work hard to get the better of Team OSCARO by Campos Racing’s Pepe Oriola to claim sixth. Michelisz, meanwhile, reported handling issues following contact from Bennani at Lisboa on lap one.

Timo Scheider, who will start the reverse-grid Race 2 from the DHL Pole Position on Sunday, scored his best WTCR OSCARO finish to date with eighth – his first points – ahead of the Alfa Romeo of Team Mulsanne’s Luigi Ferrara, who also scored for the first time. DG Sport Compétition’s Mato Homola completed the top 10 in his PEUGEOT.

Björk continued in P11 to the flag, while Vervisch made it home in P12 after his incident with Bennani, who finished in P15.

The best of the Macau wildcards was Champ Motorsport’s Filipe Souza who brought his Audi home in P18.

Race 2 of WTCR Race of Macau takes place on Sunday morning at 8h20 local time, with Race 3 scheduled to follow at 11h00.