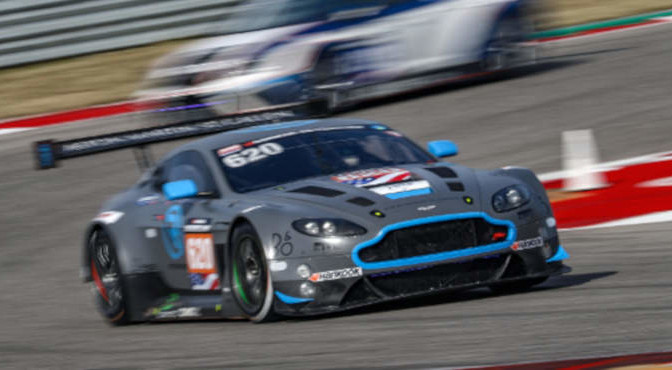 In an exciting qualifying session on the 5.51km Formula 1 Circuit of the Americas, the R-Motorsport quartet of drivers – team owners Dr. Florian Kamelger and Dr. Andreas Baenziger together with Marvin Kirchhöfer and Peter Leemhuis – booked P1 on the grid for the season finale of the 24h Series. R Motorsport driver Kirchhöfer beat the opposition to put the only Aston Martin Vantage V12 GT3 in pole position.

The German pro was on song right from the first few minutes of the session. Kirchhöfer moved to the top of the timesheets on his third lap with an impressive time of 2:06.713 minutes. But he wasn’t finished there: the R-Motorsport man posted one best sector time after another on his fifth lap, shaving off a further two tenths. Unfortunately, the stewards ruled that he had strayed over the track limits.

After six laps, the 24-year-old pitted for a set of new tyres. He re-emerged with 25 minutes left on the clock and less than five hundredths of a second separating the Top Three.

The qualifying session was really exciting. For a while, Kirchhöfer dropped down to second place. But the R-Motorsport driver moved back to the top of the leader board on his first lap on the fresh tyres, setting the best time of the day – 2:05.774 minutes. This was enough to relegate the Mercedes-AMG GT3 Black Falcon to second place by a margin of more than half a second, a lead that was not threatened for the remaining 45 minutes of quali.

The R-Motorsport quartet made an impressive track debut, posting fast lap times right from the start. Kirchhöfer was at the wheel for the private test on Friday morning, already showing the team’s great potential with a time of 2: 07.377 minutes.

Dr. Florian Kamelger, R-Motorsport Team Principal and driver of the #620 Aston Martin Vantage V12 GT3: “That was an exciting quali with an excellent performance from Marvin and our team. We are delighted with our first pole position in the Creventic 24h Series; our Aston Martin Vantage V12 GT3 may not be the newest model, but it’s still one of the fastest cars in the field. We’re now looking forward to the race, which makes very different demands on the team from what we experienced in qualifying, because a lot can happen in an endurance race.”

Marvin Kirchhöfer, driver of the #620 Aston Martin Vantage V12 GT3: “It was a very good lap, and I’m obviously happy to have secured pole position for the team. From the Blancpain Endurance Cup, we know that we have excellent pace over the full distance. Ultimately, though, a race as long as the one here on the COTA at Austin involves a lot of uncertainties. But we have a good team, and we go into this race feeling very optimistic.”