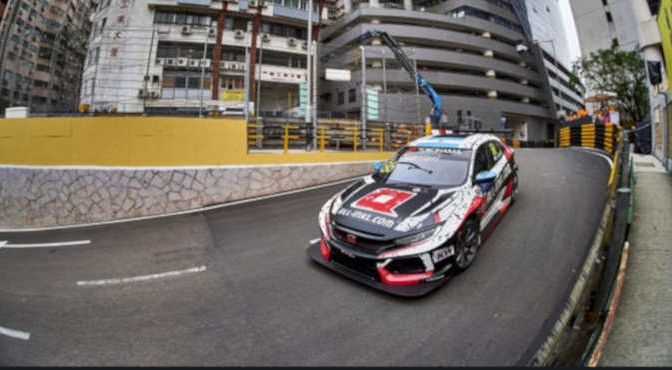 The Honda Civic Type R TCR will start all three WTCR – FIA World Touring Car Cup races in Macau from the front row thanks to a storming performance by ALL-INKL.COM Münnich Motorsport in qualifying.

Esteban’s effort means the Argentinian will end the season with the WTCR’s King of Qualifying, with a better average position than any other driver in the series, while Timo’s achievement came on what is his debut on Macau’s demanding street circuit.

Yann Ehrlacher, whose post-Suzuka engine change guaranteed he would start Race One from the back of the grid, was a magnificent fourth-quickest in the morning, despite spending the first half of the session towing his team-mates around.

The Frenchman will start Race Three from fifth spot after suffering a gearshift issue on his Q3 lap during the afternoon, without which he believes a better position was achievable.

Ma Qing Hua, on his return to Boutsen Ginion Racing after missing Suzuka, starts Race One from 14th spot and Races Two and three from 16th, but crucially lost time in both sessions after encountering slow traffic on his best laps.

Team-mate Tom Coronel, a podium finisher at Macau in both Formula 3 and World Touring Cars, starts 18th in Race One after also losing vital time on his fastest lap due to a slow backmarker, and 23rd for Sunday’s pair of encounters when the same problem repeated itself twice; losing the Dutchman the chance to capitalise on fresh rubber.

Macanese wildcard Andre Couto, qualified 22nd for his WTCR debut for the Macanese MacPro Racing Team, despite minor technical issues in both sessions.

The local hero used all his Guia Circuit experience to good effect; finding a full second on his final lap in second qualifying – his only unimpeded effort on new tyres – and will start Sunday’s races from 26th.

“I’ve qualified second in both sessions and that makes me the best qualifier of the year in WTCR, which is great, but I’m still slightly disappointed not to get pole to end the season, so today’s a bit sweet and sour. The team have done an amazing job to make the car so fast and I have to thank Yann and Timo because we really drove as a team in qualifying. I really thought we had the speed to do it, but we’re 100 per cent in the fight to get a race win if we can start well. The four points were also very valuable as they keep me in the championship fight, but that’s not something I’m thinking too much about because the gap is still very big.”
- ALL-INKL.COM Münnich Motorsport

“I have mixed feelings about qualifying. The positive is that the Honda has been fantastic and enabled me to be fast all day. The negative is that because of my grid penalty, I knew I had to sacrifice myself in Q1 to help Esteban and Timo with a tow, but I did that and then managed to qualify fourth without a tow, which shows how strong we are at Macau. Second qualifying was going really well and I made it into Q3 again, but I had an issue with the upshift and had to drive the final third of the lap one-handed because I was holding the paddle in place! That forces quite a mental recalibration, so who knows what I could have done without that.”
- ALL-INKL.COM Münnich Motorsport

“I’m absolutely stoked with this result. I got my best WTCR qualifying in the morning with 11th and then improved it to 10th in the afternoon, which puts me on pole with the reversed grid. I knew Macau was going to be a challenge, and I had a feeling the track would be awesome, but this result is better than I could ever have expected. After going 11th in practice, the team joked that this could happen, but now it’s a reality. Thanks to the guys for giving me an awesome car and to my team-mates for the tow down the main straight that really helped.”
- ALL-INKL.COM Münnich Motorsport

“We had a solid start to qualifying, but we had some bad luck with backmarkers a couple of times. Not only did this prevent me from setting good times on those laps, it also meant it was impossible to find the limit of the car at those sections of the track, because I had to back off. That meant on the next flying lap, I never quite knew how hard I could push, so that put us at a big disadvantage. We definitely would have gone faster without these incidents, but I’m not sure by how much. We will improve the car for tomorrow’s race and I’m sure we can have some strong performance.”
- Boutsen Ginion Racing

“This weekend so far has been much better than the past few races, even if the results sheets don’t show it. I start 18th for the Saturday race, but I’d easily have been two rows further up if I hadn’t encountered a wildcard, who backed off the throttle right in front of me at the worst possible time and lost me seven tenths minimum. That gave me a lot of confidence in the afternoon, but this time I had the same problem with backmarkers twice at the same place, and each time when I was in the peak tyre-performance window. What’s positive is that I’ve had equal ultimate performance with my team mate for the first time in a while.”
- Boutsen Ginion Racing

“It’s been a tough WTCR debut. We lost a bit of time in the sessions with an issue in the morning and then aother one later on, which meant I didn’t have time to get really comfortable with the car. We were starting to get there towards the end, so that gives me some hope for tomorrow. We know anything can happen on a street circuit tomorrow and with a lot of Macau rookies on the grid, I hope my experience here can help us take a strong finish.”
- MacPro Racing Team

“What a fantastic day for the team. Front-row for two races and pole position for the reversed-grid race, all three cars into Q2 and a first top-10 qualifying position for Timo, who has shown all his quality to be very fast here on his Macau debut. Yann did a great job for the team in first qualifying to give both Timo and Esteban a nice tow, and showed his speed as well with fourth-best time. We’ve had some pretty bad luck in the Asian races recently, so we’re going out on Saturday and Sunday to finish on the podium and end the season on a high.”
- ALL-INKL.COM Münnich Motorsport

“Today has been tough. The pace of the cars has been okay, but we weren’t able to show what we were fully capable of because both Tom and Ma were very unlucky to find slow backmarkers at just the wrong places in the morning and afternoon. This is our first time competing in Macau and it’s very different to any street circuit we’ve experienced before. The team have done a strong job in making things run smoothly. It’s just a shame we couldn’t have representative positions in qualifying because of this bad luck.”
- Boutsen Ginion Racing

“Today has been a big challenge, as we knew it was going to be. We’ve never run the Civic Type R TCR on Yokohama tyres, never turned a lap of this circuit with the car and we’re running 20kg extra weight because we’re a wildcard. Despite this, we were the fastest wildcard entry in the first session and we know we’d have been further up without a couple of small technical issues, which cost us track time. We’re a bit lower than we hoped to be, but this is Macau and Andre is a master of overtaking here, so we will aim to race forwards tomorrow.”
- MacPro Racing Team

“It’s extremely pleasing to see the Honda Civic Type R TCRs run very fast in Macau, which shows the great work the customer teams have done. I think the races will be a challenge because under the current BoP there are other cars with better top speed and it might be tough to overtake, but this is Macau and anything can happen. I’m sure the cars will be fast and there’s no reason not to finish the season well.”
- JAS Motorsport