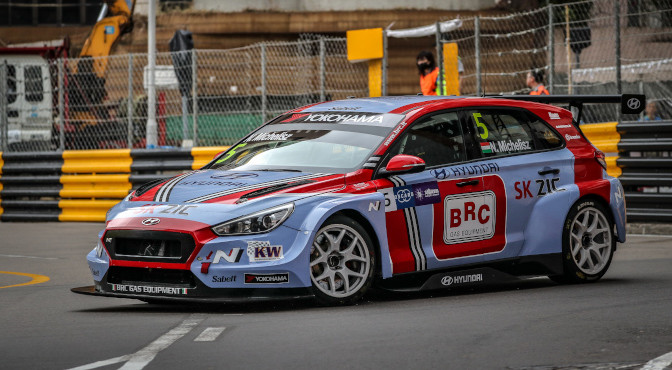 Rob Huff secured his third DHL Pole Position of the WTCR – FIA World Touring Car Cup presented by OSCARO season as points leader Gabriele Tarquini suffered a blow to his title hopes by crashing out in Q1 at WTCR Race of Macau this afternoon.

The result also marked an eighth pole at Macau for Huff, who is bidding for Suncity Group Guia Race victory number 10 on the 6.12-kilometre street circuit.

“I just wanted to reward the boys and end the season on a high,” said Huff, who has also claimed the DHL Pole Position for Race 1. “We’ve come here and stamped our mark again. I hit the wall on my lap because I’d realised I had been too steady in sector one. It’s great.”

Drama for Tarquini in Q1
Drama struck in the closing moments of the 30-minute Q1 session when Tarquini nosed his BRC Racing Team Hyundai i30 N TCR into the wall. The Italian was unable to restart his car and from a position of strength, he now found himself unable to continue in qualifying. By the flag he had dropped to a disastrous P14.

Huff topped the Q1 session with a lap of 2m29.333s, but with only the top 12 progressing to Q2, inevitably there were others to suffer disappointment among the bumper 31-car field. Those who just missed the cut included WTCR OSCARO title contender Thed Björk, whose YMR team had worked hard to repair his Hyundai after his crash in the opening qualifying session earlier in the day. He was P13.

Along with Björk and Tarquini, others to miss out included Comtoyou Racing’s Aurélien Panis in P15, Ma Qing Hua in P16, John Filippi and Gordon Shedden, while those breathing a sigh of relief by making the cut were Nathanaël Berthon in P12, Kevin Ceccon and Frédéric Vervisch just ahead of him and former DTM champion Timo Scheider, who progressed comfortably with the ninth fastest time.

Huff continues to dominate with Q2 best
In the 15-minute Q2 session, Huff continued to dominate the top of the timesheets with a 2m29.207s best. Joining him in the Q3 top-five shoot-out would be Jean-Karl Vernay, Yann Ehrlacher, Norbert Michelisz and Esteban Guerrieri.

WTCR OSCARO title contender Yvan Muller, who is second in the points to Tarquini, just missed out on Q3 in sixth, while there was joy for Scheider who claimed the Race 2 reverse-grid DHL Pole Position by qualifying in P10.

DHL Pole Position shootout recap: Guerrieri first, Huff fastest
Argentine Guerrieri was the first to go in the Q3 shootout, the ALL-INKL.COM Münnich Motorsport driver setting a benchmark of 2m30.034s in his Honda Civic Type R TCR. Michelisz was next to go, but the BRC Racing Team Hyundai couldn’t match Guerrieri’s time, the Hungarian missing out by 0.184s.

Ehrlacher then attempted to knock his ALL-INKL.COM Münnich Motorsport team-mate from the top, but he proved slower than Michelisz.

Vernay was next in his Audi, the Frenchman showing plenty of commitment on his lap. But he was another to fall short, his time proving only good enough for third behind Guerrieri and Michelisz.

Finally, it was Huff’s turn. After dominating the timesheets up to this point, expectations were high that he’d claim the DHL pole for Race 3 on Sunday. The Briton lost a wing mirror on his Golf, such was his commitment, but sure enough the top spot was his, by 0.374s from Guerrieri, Michelisz, Vernay and Ehrlacher.

Guerrieri’s effort means he has the best qualifying average out of all WTCR drivers in 2018, while Björk scored the most DHL Pole Positions of all with six.