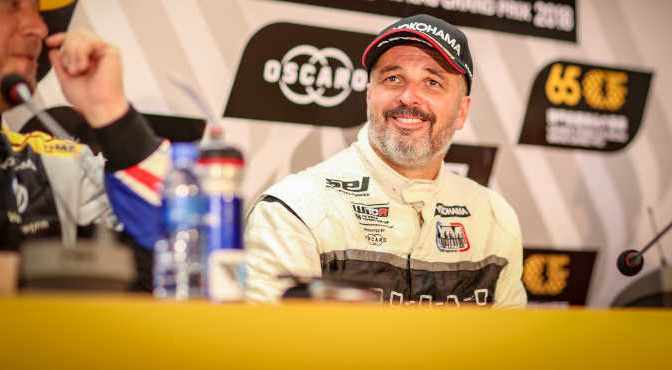 Q:
Turning first to Rob Huff, the King of Macau. A fantastic start to your weekend but just explain how that lap was so quick?

RH:
Huge congratulations to the guys either side of me, they pushed really hard and at one point I was a bit concerned that Esteban might have taken it from me. We got a good lap on the first run and that sort of set the bar if you like early in qualifying. Then on my second run I was behind Yvan and got a much better lap, he towed me around so thank you.

YM:
You have to give it me back.

RH:
I gave it back many years ago! The third and fourth run was a red flag and a yellow flag but the fourth run especially we were quite a bit quicker and we felt we had a good time left in the car, it was just whether we had enough fuel and time to make that extra run. Of course there was. Sector one I was completely on my own, so of course sector one was down and at that point most people thought the lap was over but the middle bit of Macau is where the time comes and I just managed to absolutely nail the second and last sector and huge thanks to the team for giving me such a wonderful car. It was a joy to drive and I’m very happy.

Q:
Turning next to Esteban Guerrieri, almost your first Macau pole but not quite. Just explain Lisboa because it looked quite exciting between you and Yvan Muller at one point?

EG:
First of all, congratulations to Rob. My lap was very good and also Yvan’s but his lap must have been amazing. I would like to see that onboard. It was a very good qually, to be honest the incident with Yvan, when I got out of the car I went to ask what happened. He said I blocked him but to be honest I didn’t see, I was on my slowing lap and we will have to check that. We will talk to him later about this for sure. From my qually was a nice one. I was on a very good progression. On my third run I messed up in sector three so it [wasn’t] a very good run. I pit in. But I have to thank Yann [Ehrlacher, team-mate] because he went out with used tyres because he has and engine penalty and he starts at the back so he towed me on the first sector and then I did a very good second, third and fourth sector to get provisional pole. I was actually thinking it was done, I don’t know if the TV was wrong with the sectors but Rob said he gained everything later but I saw he was 0.6s slower so I thought everything was done but apparently he gained 0.9s back. I will see the sector times later but still it was a very good feeling to be in the front in Macau for my second time in touring cars. Let’s give it a go later on for another qually and let’s fight tomorrow in the races.

Q:
Turning next to Yvan Muller, the four-time FIA World Touring Car champion, going for the title this weekend and you’re ahead of your rival Gabriele Tarquini in First Qualifying. But could your lap have been better if it wasn’t for the situation at Lisboa?

YM:
I don’t know, we will never know. My lap was not bad, not bad at all. It can always be better at Macau even when you are almost 50 years old. I can be pleased with this qually, I am still not quick enough in the third sector but the rest is not bad. We will see what will happen in the race.

Q:
Turning finally to local hero André Couto, a winner here in Formula 3 an back in World Touring Cars. How was your first competitive action in WTCR?

AC:
I’ve been struggling a lot to find the pace and I’m not feeling very confident with the car in the braking. So I just need to take some time and go step by step.