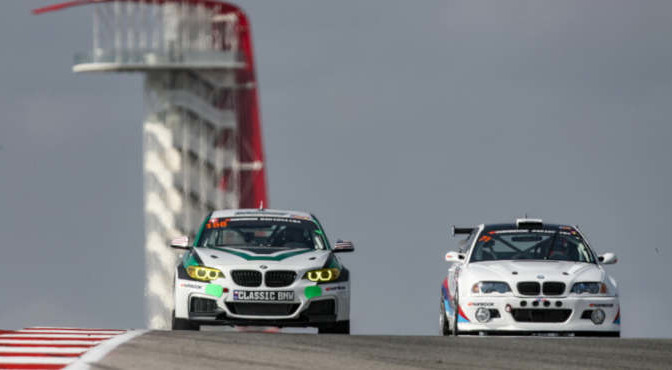 Having started in Dubai in January, the 2018 Championship of the Continents in the CREVENTIC SERIES powered by Hankook is coming to an end with next week’s second running of the Hankook 24H COTA (16-18 November). Last year, the Dutch organiser and promoter staged a race at the Circuit of the Americas in Austin, Texas for the first time. Following this successful debut, CREVENTIC are now returning to the US with an attractive field of GTs and touring cars. US-based teams have the largest contingent, but once again, there is no lack of international flair with drivers and teams from 18 different countries. Exciting competition is expected, too, with the Championship of the Continents titles at stake!

In order to score points for the Championship of the Continents, participation in all three rounds is mandatory. The season started in Asia with CREVENTIC’s flagship event, the Hankook 24H DUBAI, in January, followed by the Hankook 24H PORTIMAO in July as the European round. The race at the Circuit of the Americas, representing the American continent, will be the title decider. Thrilling battles are expected in the various classes. In the A6 class, Car Collection Motorsport, PROsport Performance and SPS automotive-performance are in contention. These teams are also competing for the overall GT title, together with VDS Racing Adventures, Speedlover and Perfection Racing Europe. In the TCR class, the two Team Altran Peugeot entries are separated by only one point. For overall TCE honours, the two crews from the French team are joined by Hofor Racing powered by Bonk Motorsport, LAMERA-CUP and Sorg Rennsport. Traditionally, the race at the Circuit of the Americas being the final round of the season, 1.5 times the regular number of points are being awarded for the event.

24 cars have been entered for the GT division, spearheaded by the A6 class with ten entries of GT3 and similar cars. These include last year’s COTA race winners Herberth Motorsport with the Porsche, teams with Mercedes-AMG GT3, Audi R8 LMS, Ferrari 488 GT3, Aston Martin Vantage GT3 and a pair of the American SCG003c sports cars. Three Porsche 991 Cup cars, all from American teams, are racing in the 991 Cup class. The SP2 class has four entries with a MARC Focus, a Lamera Cup car, a Porsche and a BMW. The GT4 class has seven entries with Porsche, Mercedes-AMG, BMW and Ginetta.

Nine TCR cars lead the TCE division with Hyundai, Volkswagen, Audi, Cupra and Peugeot represented on the grid. The SP3 class includes a BMW and a Lamera Cup car while three BMW M235i Racing Cup cars in the CUP1 class round out the field.

The SCCA Pro Spec Racer class is the support category of the Hankook 24H COTA. There are rent-a-car rides and private tests for the TCE and GT divisions on Thursday, 15 November and Friday morning, 16 November. Official action starts on Friday with free practice from 13.00-14.30 hrs, followed by TCE qualifying from 15.50-16.35 hrs and GT qualifying from 16.45-17.30 hrs. Night practice takes place from 19.00-20.30 hrs. The starting grid procedure gets underway on Saturday, 17 November, at 9.50 hrs, with the race starting at 10.30 hrs. There will be an overnight break from 23.00-8.00 hrs, with the finish at 19.30 hrs on Sunday, followed by the prize-giving ceremony and championship awards celebrations (all times local, CET is seven hours later).

Live streaming in HD quality with commentary from the Radio Show Limited team, well-known from IMSA Radio and Radio Le Mans, is available on the series’ website and Youtube channel as well as Motortrend on Demand. There will also be regular updates on Twitter, Facebook and Instagram (24H Series).

Hankook is the official title sponsor and exclusive tyre supplier for the event. A new element for the race at the Circuit of the Americas is the presence of Gulf Racing Fuels as the official fuel supplier for the event. Gulf is an iconic brand in motorsport if ever there was one, not only because of Steve McQueen’s legendary film ‘Le Mans’, but also with plenty of racing success for Gulf-liveried cars in the US, including victory at Daytona and a podium finish at Sebring. All drivers at COTA will receive a commemorative Gulf event t-shirt while the drivers finishing in the top 3 in the various classes will be presented with collectible Gulf cufflinks.

The following companies will be present with sales and service booths in the paddock at COTA: DRD international for pit equipment, screen protection etc., Stand21 Racewear, Speedcom for radio communication equipment and support, Aircharge, specialised in wireless mobile charging products, and Circuitvanhout that has produced the beautiful new trophies for the prize-giving ceremony. Further information can be found at www.24hseries.com.