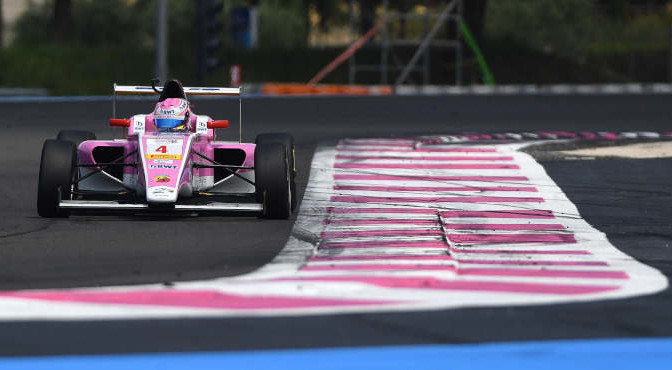 Every success story in motor racing begins in the junior series, and 16-year-old Niklas Krütten got the second stage of his career underway in 2018. After eight years and several titles in karting, the young German joined BWT Mücke Motorsport’s talent factory for junior single-seater drivers at the end of 2017. Under the watchful eye of team leader Frank Lucke, who used to look after Sebastian Vettel in his early days in formula racing, he has had to learn as much as possible and fight for the Rookie championship in both the German and Italian Formula 4 series.

Krütten showed promise right from the start by finishing on the podium during the ADAC Formula 4 season opener at Oschersleben. In the third race, he crossed the finish line in fifth place as best Rookie, and this maiden podium was to be by no means his last. He has made six podium appearances this season for team and fans.

Krütten experienced his greatest moment at the Nürburgring when still only 15. He started the last race on the ex-Formula 1 circuit from second on the grid, took the lead after the first corner and stayed in P1 until the end. Since the ADAC Formula 4 was first introduced, only four drivers, including Mick Schumacher, have managed to take a notable maiden race win in their Rookie season, and like Krütten, earn the reward for all their hard work.

That he would win his first race was only a matter of time. Krütten played his ace during the second race weekend at the Hockenheimring and finished second in Race 3. In total, he achieved six podiums in the ADAC Formula 4, securing a total of 108 points in the overall standings, and finished eighth overall as the best newcomer in the ADAC’s series for formula racing juniors.

The Formula 4 Italian championship was the second major focus of his first season in single-seater racing, and once again, he raced at Formula 1 circuits such as Monza and Le Castellet. Krütten finished on the Rookie podium as one of the top three newcomers in the Italian Formula 4 series nine times in all, which was a fine achievement and earned him third place overall among 19 newcomers in the Italian Rookie classification.

His exciting first year kicked off with outings in the Formula 4 United Arab Emirates where he contested two race weekends at Abu Dhabi’s Yas Marina Circuit which is really well-known from Formula 1. He caused a minor sensation during the second race weekend by taking a comfortable P2.

Krütten’s season was topped with a special highlight but not one of a sporting nature, strictly speaking. The second race weekend took place at the Hockenheimring where he fought for points in front of 165,000 spectators. Sebastian Vettel and Sergio Perez, who both used to be protégés of team principal Peter Mücke, were keen to pay their former team a visit, and Krütten was among the guests invited to lunch with the four-time Formula 1 World Champion.

Niklas Krütten: “One of my dreams came true in 2018. It was always my goal when I first started karting at the age of eight to switch to formula racing at some point in my career, and it’s been totally amazing to have achieved so much success in my first year in Formula 4. I’m incredibly grateful to Peter Mücke, Frank Lucke and every single member of the BWT Mücke Motorsport team for the awesome, very professional manner, in which they’ve approached our work together. We’ve had a fantastic time – I could not have had a better team, with which to start out in formula racing. Finishing as best rookie in the overall standings of the German Formula 4 shows that I’ve been the most consistent driver among this year’s crop of newcomers. I’m generally very pleased with my first year in single-seater racing and am really looking forward to whatever 2019 might bring.”