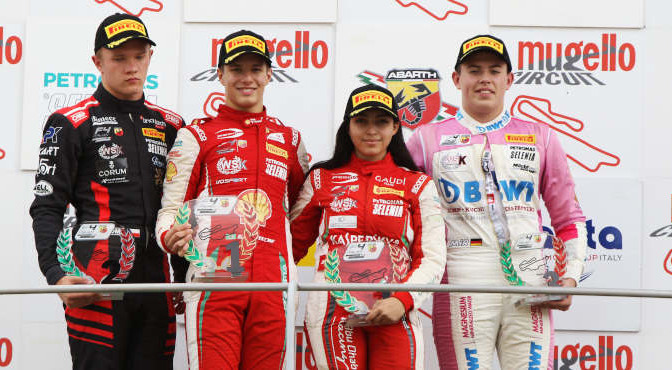 Last weekend, Niklas Krütten finished his first season in the Formula 4 Italian Championship on a high. At the end of the three races at the Autodromo Internazionale del Mugello, the BWT Mücke Motorsport driver was confirmed as third in the rookie championship after a tough campaign.

In the first round on Saturday, Krütten celebrated his ninth podium in the classification for newcomers to formula racing, having staged an impressive charge through the field from 12th on the grid to finish seventh overall. The youngster from Trier therefore scored points in the Best Rookie classification.

The second race on Sunday morning was contested on a wet track. The field started behind the safety car which only came in after several laps. There was then a pile-up in front of Krütten. The 16-year-old showed excellent reactions, luckily found a gap and swerved into the gravel to avoid a collision. But that’s where he got stuck and had to end his race prematurely.

Heavy rain also made the third race in Mugello a challenge. The start was again behind the safety car, and the field was released for only a few laps. As the rain then increased in intensity, the race director eventually decided to call a halt to proceedings. Despite the curtailment, Krütten still managed to work his way up from 19th to eleventh place and finish fourth in the rookie class.

Congratulations on taking third place in the Best Rookie championship!
Thank you. I’m satisfied, because it was a good way to round off the season. It was by no means easy in the Italian Formula 4, as there were 19 rookies and the competition was fierce. Unfortunately, we weren’t always on song in terms of pace. All the same, though, I made nine podium appearances in the rookie class.

Tell us about your great charge through the field to seventh place!
It was partly because I pulled off some good overtaking moves, but it was also due to the retirement of quite a few other drivers who had been ahead of me. We didn’t have as much tyre degradation as the opposition, so while the others were having to go easy on their tyres, we were still able to push hard. That was our big advantage.

In the other two races, heavy rain made the going very difficult. How was it from your perspective?
In the second race on Sunday morning, I was relatively lucky. That was pretty close. When the cars collided in front of me, I used the only gap available and swerved onto the gravel. Unfortunately, I got stuck there, and consequently my race came to an early end. In the third race, I could hardly see anything due to the spray being kicked up by the cars in front of me. A couple of them retired from the race, but I also overtook others and I was satisfied with my pace in the wet. Ultimately, though, it made sense to stop the race.

In one of the photos from Mugello, there is some lettering on the narrow pane of plexiglass behind the wheel of your car. Is that what you wrote, and what does it say?
Yes, I wrote it myself. It says “Andiamo signora rosa!!!” which means “Let’s go, Pink Lady!” I put it there to give my car extra motivation. I also add the name of the car; in Mugello, it was Helena. I give each car its own name.