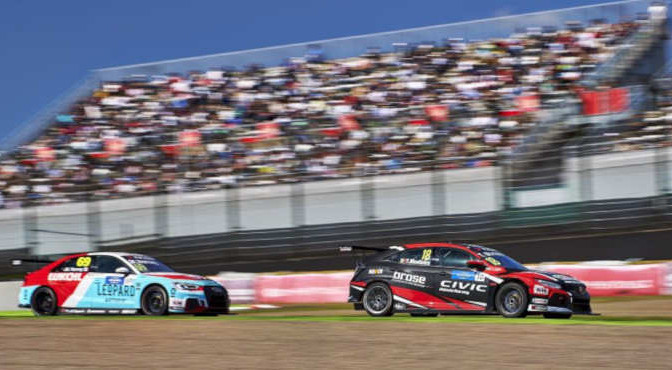 Tiago Monteiro capped off an encouraging return to the WTCR – FIA World Touring Car Cup with a double finish at Suzuka in front of a massed Japanese crowd at Honda’s home circuit on Sunday.

The Boutsen Ginion Racing driver battled hard for points in Race Three in his Civic Type R TCR and finished just 0.2 seconds away from the top 10 to complete an emotional comeback weekend for the Portuguese.

Team-mate Tom Coronel, who was inundated with support all weekend, made excellent progress in both races. The Dutchman flew from 21st on the grid to finishing positions of 19th and 14th to complete a treble finish.

The Frenchman made another rocket getaway to move up from fourth to second at the start of Race Three, but was denied a podium finish after developing a power issue mid-race.

Team-mate Esteban Guerrieri was another to start strongly, but the Argentinian was unlucky to be spun into the wall on the opening lap of Race Two at the Esses by a rival driver.

After superb work by the team to fix the damaged car within the Repair Time window, Esteban was able to start Race Three from his rightful grid spot. He climbed from 11th to sixth, but was hit again and dropped to 19th by the chequered flag.

Timo Scheider completed a treble-finish of his own. The German finished 16th in Race Two and improved to 13th in Race Three, within two seconds of the points.

The weekend results, achieved in front of a crowd of 42,500, means Esteban is sixth in the WTCR points and retains a chance of becoming champion at the season finale on the streets of Macau in November. Münnich are third in the Teams’ points.

Tiago Monteiro 18
“What a weekend! I came here without any targets set publicly, but privately I needed to prove I could be competitive straight away. The team have been fantastic in improving the car from day to day and I genuinely think that if this had been a normal weekend, with second qualifying on the same day as Races Two and Three, I could have got into the top 10 on the grid. It’s felt amazing to be back all weekend and I’m very pleased with how everything’s gone. It’s a great starting point for 2019.”

Tom Coronel 9
“We made some good progress through the weekend and you can see the evidence of this from the race results. I’m quite happy with the handling and I have more confidence to push than in previous weekends. We do still need to improve in qualifying. This championship is so tight that even a small gain in time can put you many positions further up on the grid. If I’d started on the seventh row – which could have been possible without the red flag in qualifying – I think the races would have been even better.”

Yann Ehrlacher 68
“The handling of the Honda has been very good today and after I went up from fourth to second at the start of Race Three, I was confident of finishing on the podium for the first time since Zandvoort. Unfortunately, I lost the power and had to stop, but that’s motorsport and that can happen. It was especially disappointing because the guys have worked so hard to improve the car from FP1, but unfortunately the results just didn’t come our way this weekend.”

Esteban Guerrieri 86
“Today has been very tough for me and the whole team. I made a great start in Race Two, was turned into the wall by [Medhi] Bennani and when I spoke to him afterwards he said he didn’t see me, even though he was directly behind me! The guys did a great job to get me out for Race Three and I got up from 11th to sixth, but the front tyres went off quite early, [Yvan] Muller hit me again – just like in qualifying – and I lost all the grip from the front, so I finished near the back. I’ll try to finish the season with a strong result in Macau.”

Timo Scheider 42
“Race Three is the most fun I’ve had in a WTCR race by a long way. It was action all the way to the chequered flag and I always had someone to race with. There were a lot of cars in the battle for sixth place, including me, and I was competitive in the first two sectors of the lap. My strategy was to look after my tyres early on, and while some other cars were struggling with grip in the late stages and couldn’t put the power down out of the slow corners, that’s where I was able to make some gains. I missed the points by 1.2 seconds, so I’m determined to score before the end of the season.”

Olivia Boutsen
Team Manager
“It’s been a fantastic return by Tiago and the pace he’s shown has been extremely encouraging. Fighting for the points on your first meeting back after more than a year out is excellent. Tom’s done a good job today as well and has finished higher than he started in both races. Neither car has taken any damage, which is very helpful because there are only a few weeks to Macau. We need to work on our strategy and speed in qualifying and not put ourselves in a position to need to fight back.”

Dominik Greiner
Team Manager
“It’s been an extremely tough day for us. After Esteban was put into the wall in Race Two, his car had quite a lot of damage, but the team did an incredible job to get the car ready for Race Three within the very short Repair Time available. It’s such a shame for them that Yann has lost a pretty certain second place in Race Three after he had an issue with the car, and that Esteban – after a really amazing drive to climb to sixth – wasn’t able to score this result. One pleasing thing is that Timo’s had three trouble-free races and has been quite close to the points in Race Three.”